Some people become teachers because they love kids. Some become teachers because they love their subject. Me? I became a teacher because “an educated populace is essential to a well-functioning democracy.” Don’t laugh–or, go ahead and laugh if you want to–but that’s a quotation (as closely as I remember it) from my teacher education program application, and it was written with all the idealism, sincerity, and earnestness that characterized my 23-year-old self. (I’m a bit more cynical now, but I’m still pretty sincere and more earnest than your average bear.)

I became an English teacher, in particular, because I felt that knowledge of language was more important than knowledge of anything else. Strong literacy skills allow anyone to learn about anything and to avoid being manipulated by those who know how to twist language and make fallacious arguments. And yet, in recent years, I’ve removed myself from the kind of conversations my younger self felt were so important. 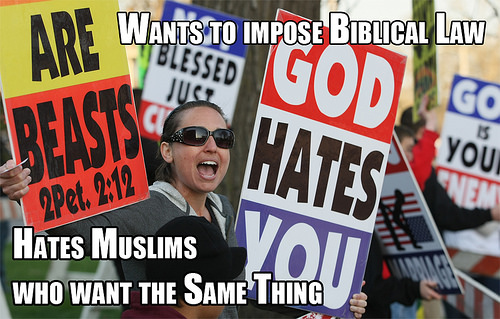 Pretty much something in here to offend everybody.

I think I was wrong. I trusted so fully in the strength of our political system that I thought it didn’t need me or my voice to carry on in pretty much the same way that it’s always carried on.

But look at where we are. I mean it:  Really look.

When Donald Trump clearly dominated the Super Tuesday primaries, just days after not repudiating validation from David Duke and claiming ignorance of who he is and what he represents (most likely falsely), I decided that I can no longer sit on the sidelines. I need to understand what is happening and to do what I can to counter it.

My concern is not just all of Trump’s reprehensible beliefs, so many of which are counter to values that have been the bedrock of our nation. It is that we might elect such a man as our president when we also have an incomplete Supreme Court likely to be deadlocked on key upcoming cases and a congressional process controlled by those who have vowed not to fill its empty seat by even considering a nominee, in spite of the fact that our Constitution gives the President the right to nominate Supreme Court justices (and there is precedent for doing so in the last year of a term, most recently by Ronald Reagan). Our system depends upon its checks and balances (thank you for teaching me that, Mr. Czubin). What happens if we elect a person who disregards the Constitution and we have a deadlocked and incomplete Supreme Court and a Congress that cannot work together or with members who refuse to do so in order to further their own political agenda?

To think that we are immune from the kinds of catastrophe that have brought down other nations is arrogant and ignorant. Our only hope, I have come to believe, is for all of us to re-engage in the kind of political dialogue that will help us move forward to find our common beliefs and solutions to our challenges that will not violate our common values.

For me, that means getting uncomfortable. It means engaging in conversations about politics, especially with those who do not share my opinions, even though I might feel unfairly judged and misunderstood. As I’ve started to do so in the past week, I’ve been formulating my new rules for engagement:

1. Look for the common ground and acknowledge it. We need to let each other know where we find agreement–otherwise we might not see that we have any.

2. Be open to changing my mind. I’ve got some pretty strongly held opinions, and I’m not likely to budge when it comes to my values. However, I think we too often equate certain solutions or positions with particular value systems, and we close our minds or jump to conclusions based on that. When someone I know linked to an article about progressives driving income inequality, my first instinct was assume he didn’t care about income inequality. I was wrong.

3. Ask questions to seek/confirm understanding before judging/refuting. This requires listening/reading carefully. In a recent conversation someone referred to “folks in the establishment” and I realized I wasn’t sure of who he meant. So I asked. Glad I did.

4. Ground discussions in facts provided by reputable sources. Sometimes the question I ask is, “How do you know?” I ask it not to challenge, but because I truly want to know where the information is coming from. If I’m going to refute someone else’s “facts,” I make sure I’m correct and provide verification from as credible a source as I can find.

5. Use neutral, non-judgmental, non-inflammatory language. This one requires me to stop and re-read and examine my language before I click “post” on social media.

6. Respectfully point out bias and fallacies in logic. We need to help each other see logic that isn’t valid or tactics of argument that divert us from the issue being discussed, and I can’t emphasize “respectfully” enough. I tried to do this recently and caused offense. If we alienate others by insulting or sounding like a know-it-all, we’re defeating the purpose of engaging. (And thank you, Mrs. McConnaughey, for your course on “Semantics and Logic,” which is where I learned to recognize both logical fallacies and loaded language.)

7. Assume positive intent. I’m writing here about engaging in conversation with those we know. Trolls have no positive intent, but I bet most people you know are not trolls–even that guy from high school who posts the memes you hate. When we look for the positive intent, it’s easier to stay engaged.

As I’ve been dipping my toes back into the pool of political conversation, using these rules, I’ve found that what we like to say really is true:  Our commonalities are bigger than our differences. I’ve come to understand some things about why some support Trump, which doesn’t lessen my fear of him, but it does lessen my fear of his supporters and lessens my bewilderment. My re-engagement hasn’t been comfortable, but I’m glad I’ve done it and will continue to do so.

I believe that many of us have disengaged because we feel powerless. We feel like very small cogs in a system we can’t game. Most of us are small, and the odds really aren’t in our favor. Still, this world hasn’t yet entirely killed that young idealist who still lives within me, and I think we all need to try and we need to exercise what power we have:

My generation has never really experienced threats that required the kinds of sacrifices our grandparents had to make. I hope to whatever you believe in that we aren’t now. Let’s all do whatever we can to ensure that we won’t be. No one ever said democracy was easy. Might be time for all of us to get uncomfortable and do the hard work it requires.

11 thoughts on “New Rules of Engagement”