I have a room in my house set aside for creative projects. It used to be the bedroom of a child who can’t live here any more. I think I thought that making it a generative space would be healing in some way. That hasn’t quite been the case. 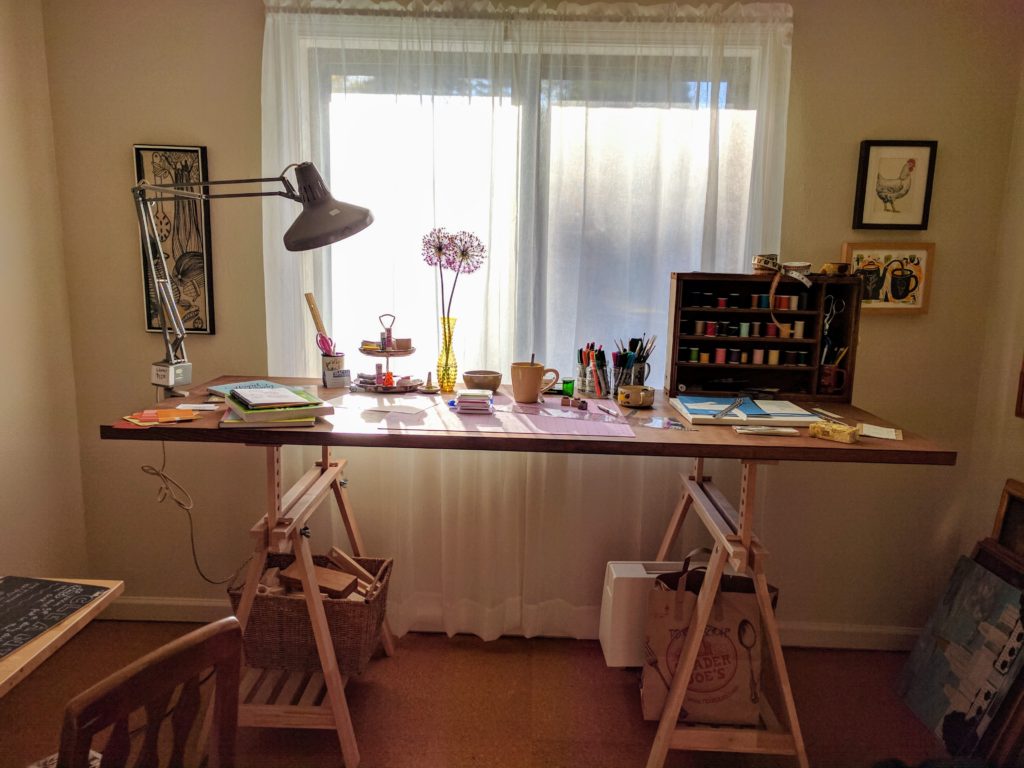 My words have dried up. I am interested in images, but I spend more time looking at others’ than making my own. I’ve thought often of Ira Glass’s words about how creative beginners have to struggle through a (usually long) period of producing stuff that doesn’t live up to our vision for it. He thinks we’re driven by a desire to create works that match our good taste, and that we have to understand that our work won’t, at least initially. 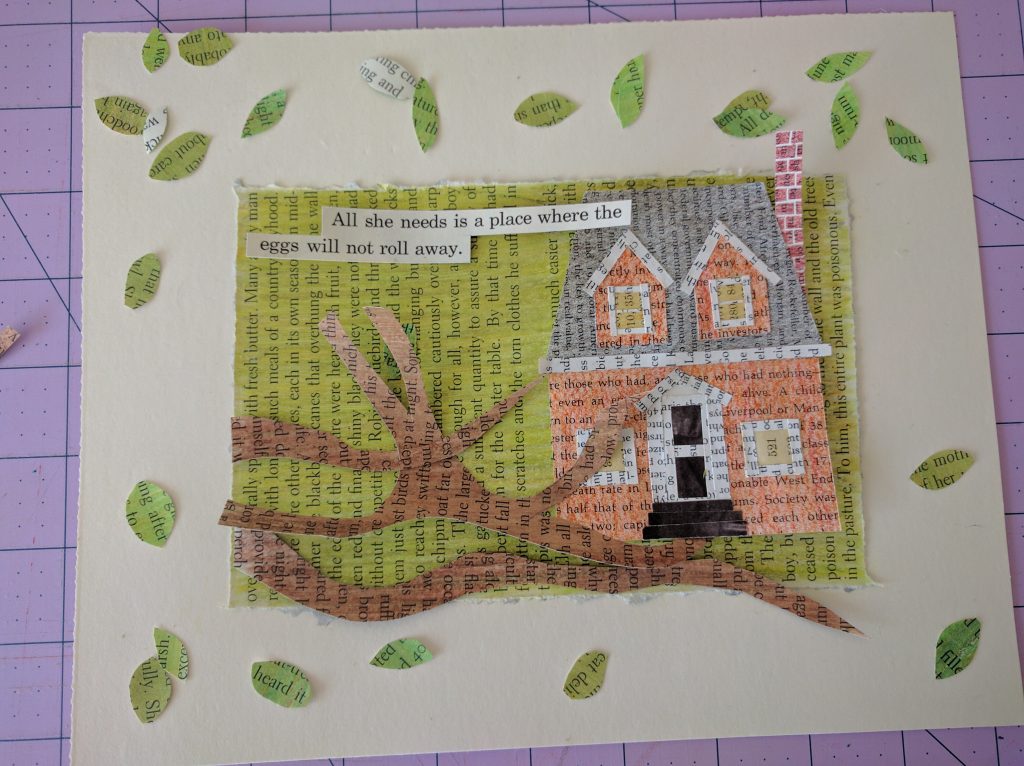 My grandmother is 100 years old. I send her a handmade card every week. Originally, I thought I would scan or photograph each one before I sent it–so I’d have some record of them–but I haven’t. It didn’t seem worth the effort. When I visit her, I see all of them in a stack on her kitchen counter. I guess I will get them back eventually, probably sooner than I would like.

Whenever I get them it will be sooner than I would like. 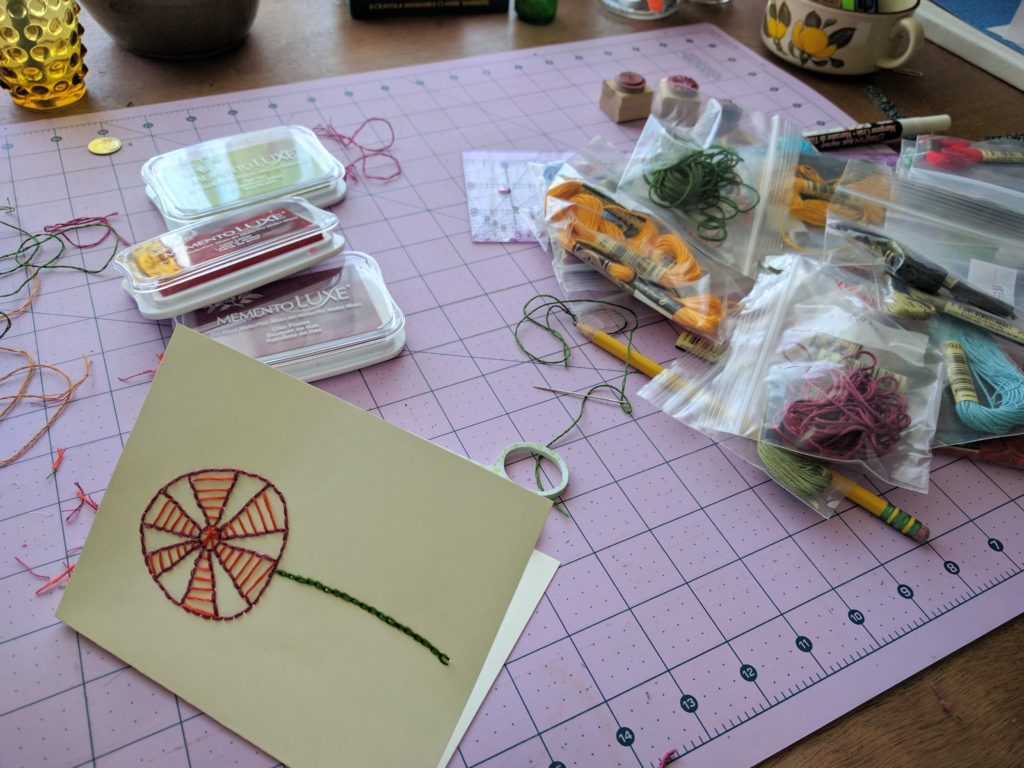 A blogging friend writes about taking photos to help her see the beauty in everyday life. I like this idea. My photos aren’t particularly great, don’t capture what I see–but they are enough to remind me of what I was doing and how I felt when I saw. 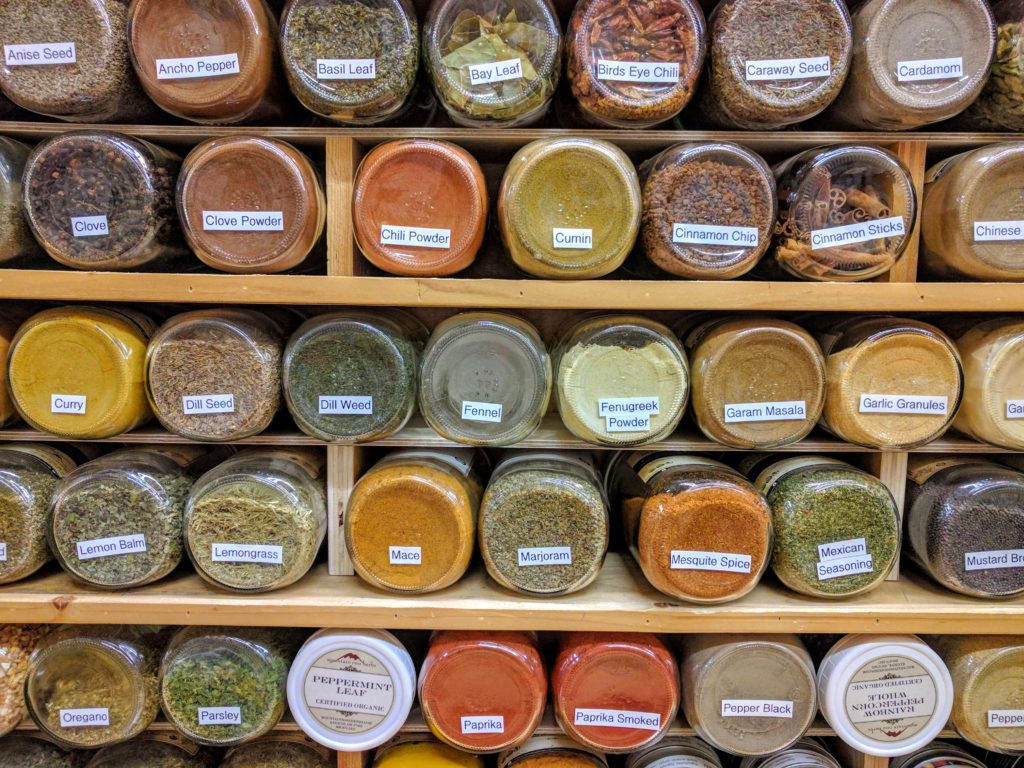 Maybe when I can no longer stroll through a farmers’ food coop in Chimacum, WA with my mother, a photo from a June morning in 2017 will remind me of how I felt and what I had when I once did. That will be good enough reason for its existence.

My grandmother knit sweaters when she was younger. She used gorgeous, high-quality yarns. Wool, not the cheap synthetic stuff. She taught me the rudiments of knitting when I was 8, but I’ve never made anything more than cotton dishcloths. When I was in college, I wrote a poem about her knitting. I called it her art. She gave me her knitting needles when she was done with them. 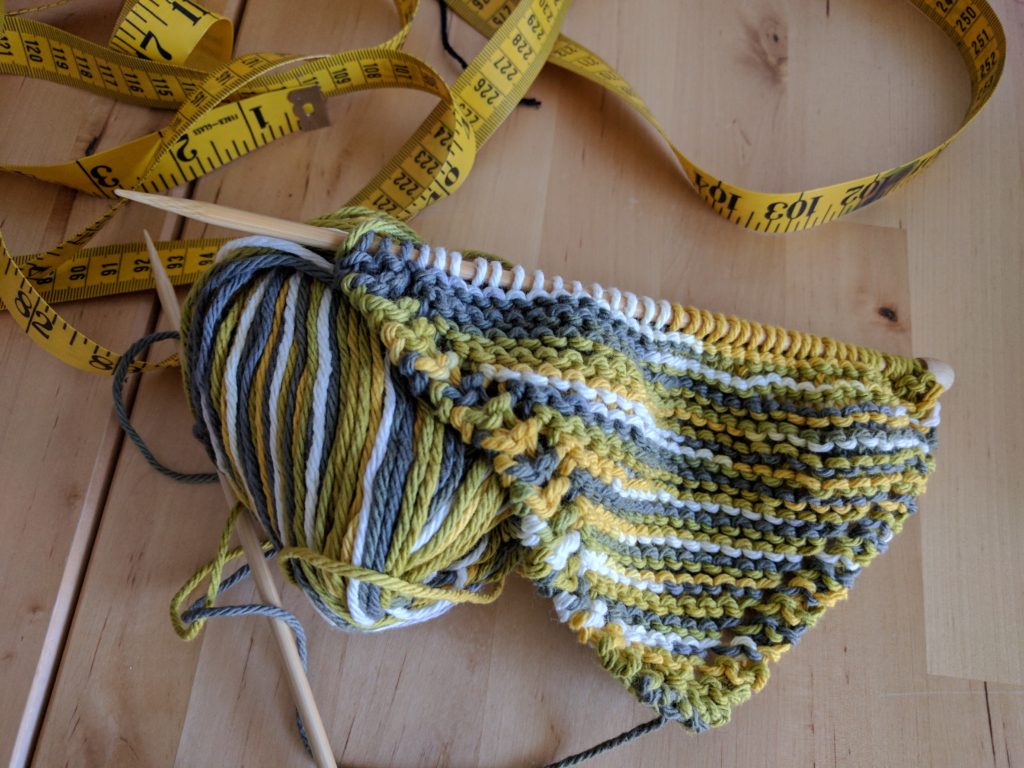 I want to take the time to muck around with images and words and paper and cloth and ink and yarn and thread, but I rarely do, other than when I make the weekly card. I cannot quiet the voice that says, Is this what you want to do with what remains of your “one wild and precious life”? And the one that says, “What are you going to do with your not-very-good art, anyway?” I don’t hear them when I’m making the cards. The images I make are not the point. My uncle tells me that the cards are a highlight of the week. He tells me this three times when I visit for an afternoon. 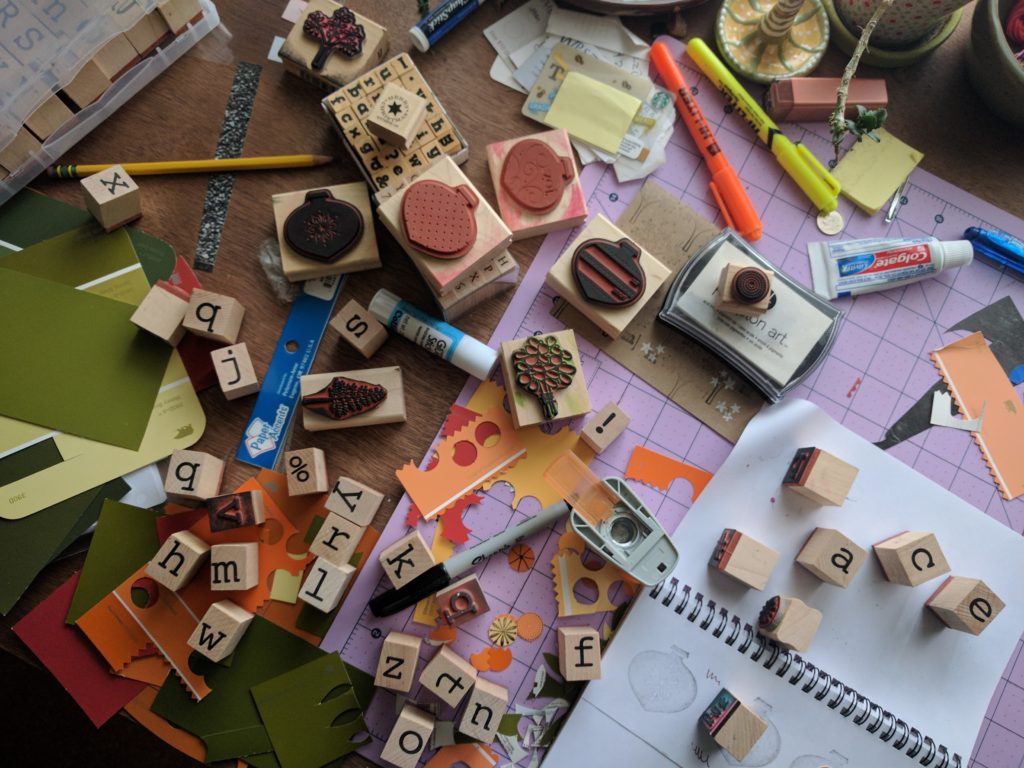 A Facebook friend I never really knew in high school posts his anguish one night over the death of a childhood friend, a musician who was once almost famous. Something about his words reflects like a mirror, and I write back. Later, he thanks me, and I respond that I know something of grief. Don’t all of us, once we reach a certain age? Doesn’t the exchange of words about that make us real friends? 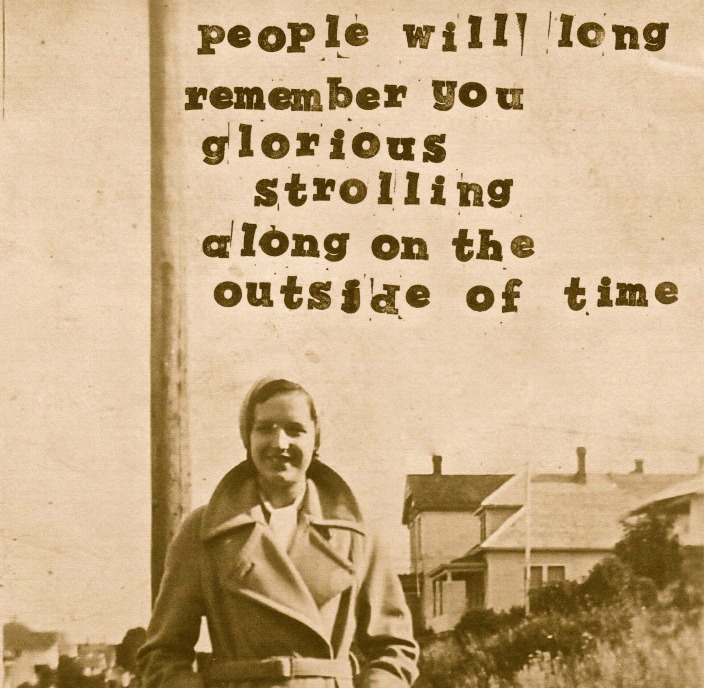 When my son is leaving for Marine boot camp, I tell him that I will be cleaning up his room. “Just don’t make it, like, a sewing room or something,” he says. “You’re not gonna do that, are you?”

What I say is, “I already have a room for sewing.”

When I am done, the room is both his and not-his. I open the door every few days, wishing and not-wishing that I will see a tangle of blankets on the bed, dirty clothes on the floor, an empty chip bag on the nightstand. I don’t know why I keep opening it, but I do. Every time, it’s so damn clean. And empty.

It will never be my sewing room. I hope he knows that. 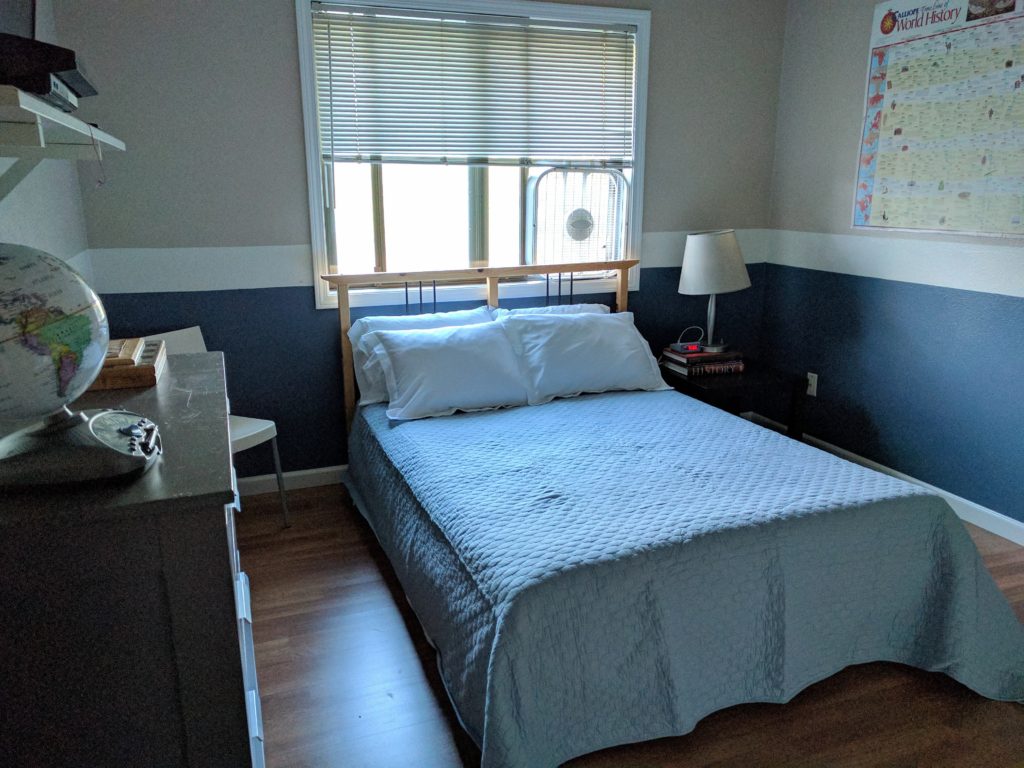 A friend I first met in a poetry workshop 32 years ago tells me to write whatever I want. He tells me not to worry about genre, or form, or making meaning for anyone else. He tells me to write–or not write–for myself, that it is time for me to do that now. He tells me it is OK if I’d rather grow flowers or make food than write. He tells me I don’t need to serve the world with my words. I don’t need to serve the world with anything. I have served enough, he says. His wife died last year. I worry about his heart, which is failing. Who will tell me these things if he’s not here to say them? 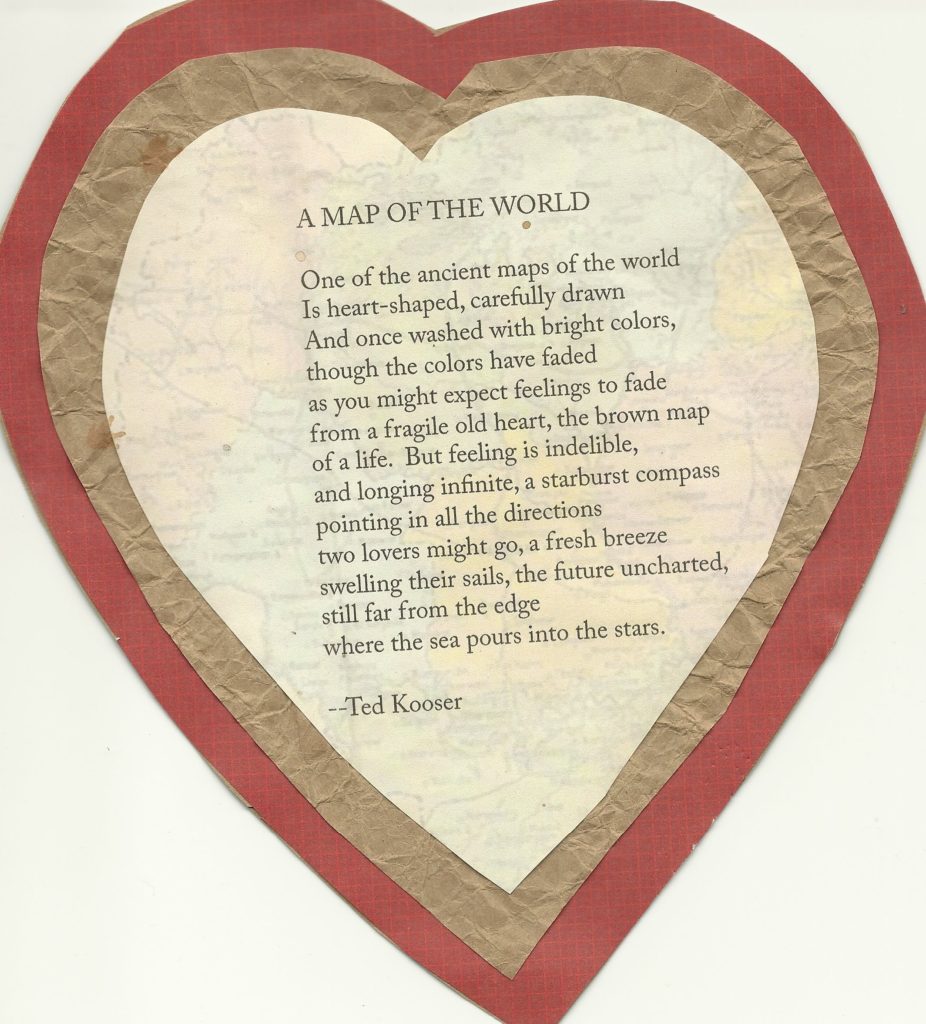 I go to lunch with my grandmother, my uncle, my parents, my brother. I look around the table, wondering when everyone got so old. I feel the engine of us shifting into a lower gear. I miss my grandma. I miss summertime lunches in her backyard, tuna salad on her homemade bread, iced tea in a sweating glass, bees buzzing among her flowers. I hate this Applebee’s, with its TV playing silently on the far wall, its too-big plates of pasta with gelatinous sauce, its air-conditioning that leaves all of us cold on a warm day. 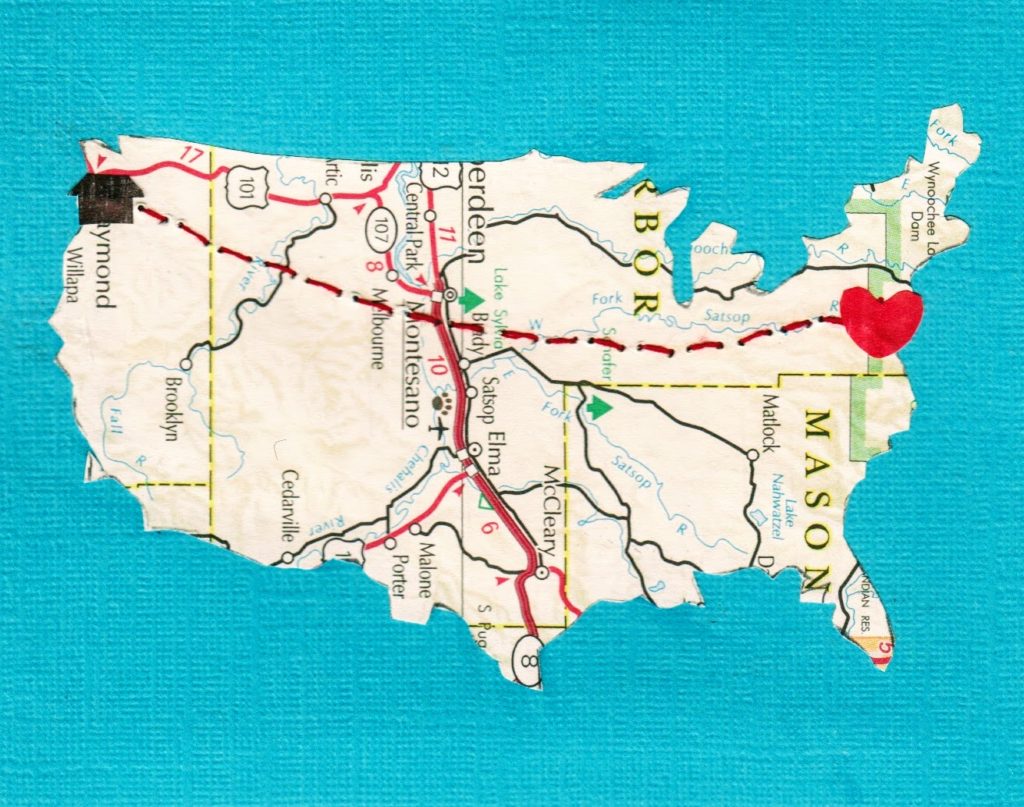 On Saturday, a different writer friend posts on Facebook about how she misses writing. She says she is going to start telling stories again. On Sunday morning I am here, after making my weekly card, gathering the first of these words without worrying about genre or form or serving anyone else, in the former bedroom of the child who doesn’t live here any more. (I am tired of stumbling over what to call this room. What will it mean if I give it another name? Which stage of grief would that act represent–denial or acceptance?) 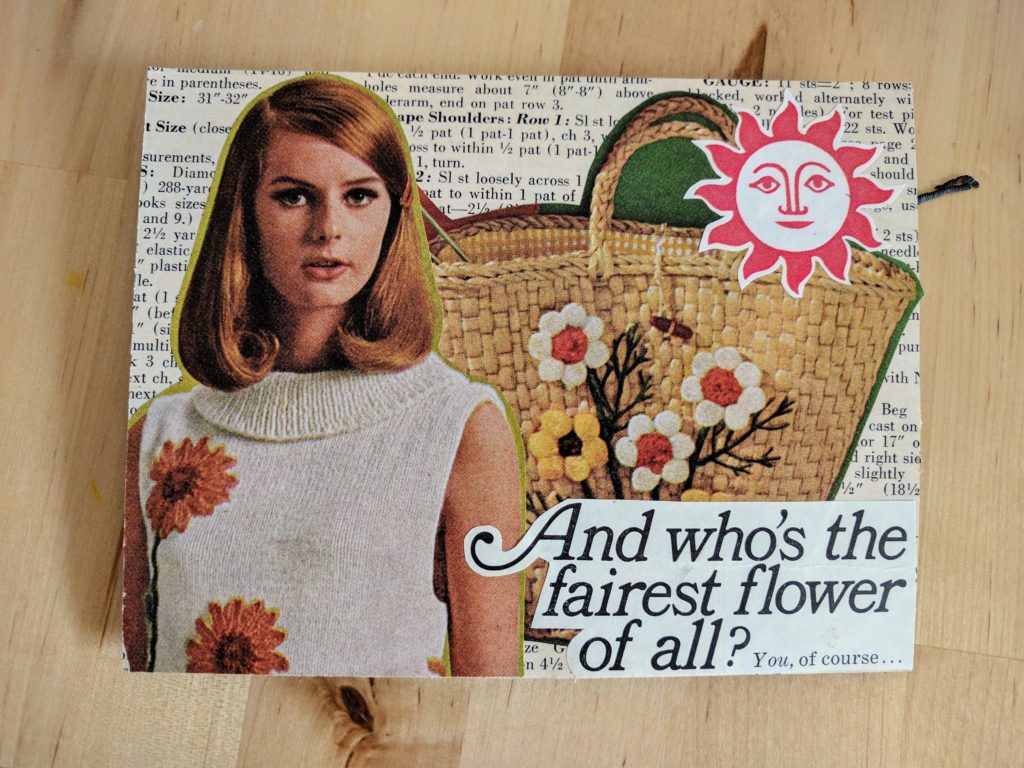 The world as we know it is ending, you know. No one’s going to save it. But here’s the thing: The world as we know it is always ending. Ira Glass tells us, “You’ve just gotta fight your way through,” and he’s right, but for the wrong reasons. Being creative is not about persevering to make things of good taste or to achieve ambitions. It’s about staying in the gorgeous struggle–and living to tell. 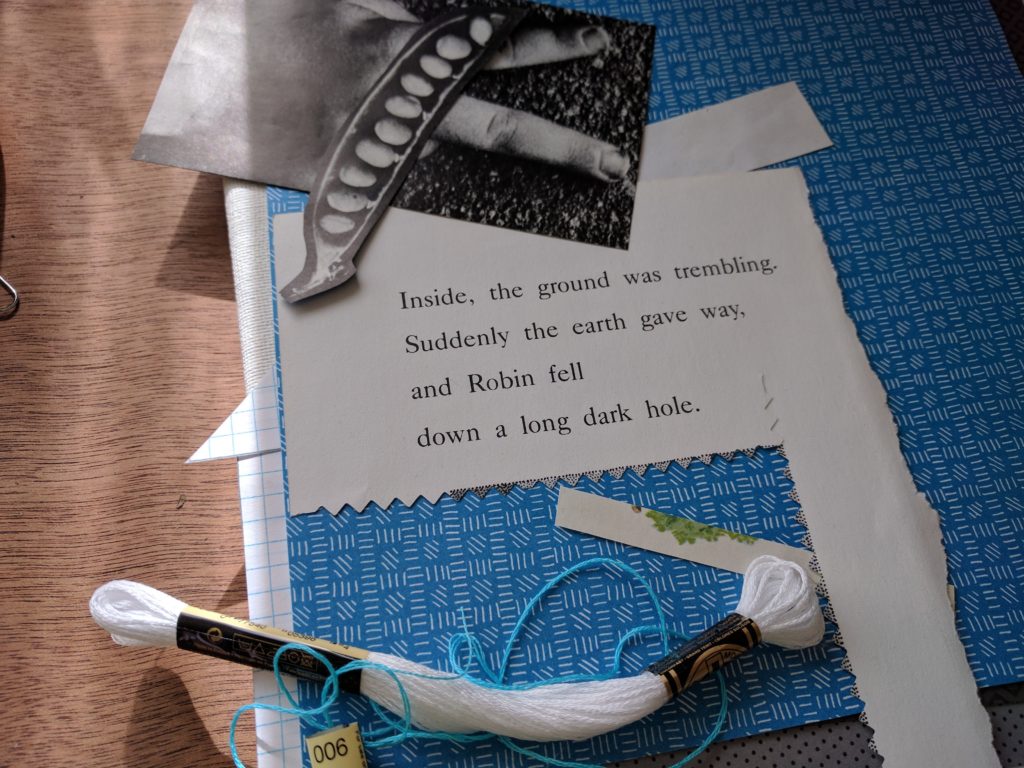