It’s Halloween this weekend, which means that’s it’s almost too late to be thinking about handmade Christmas gifts. 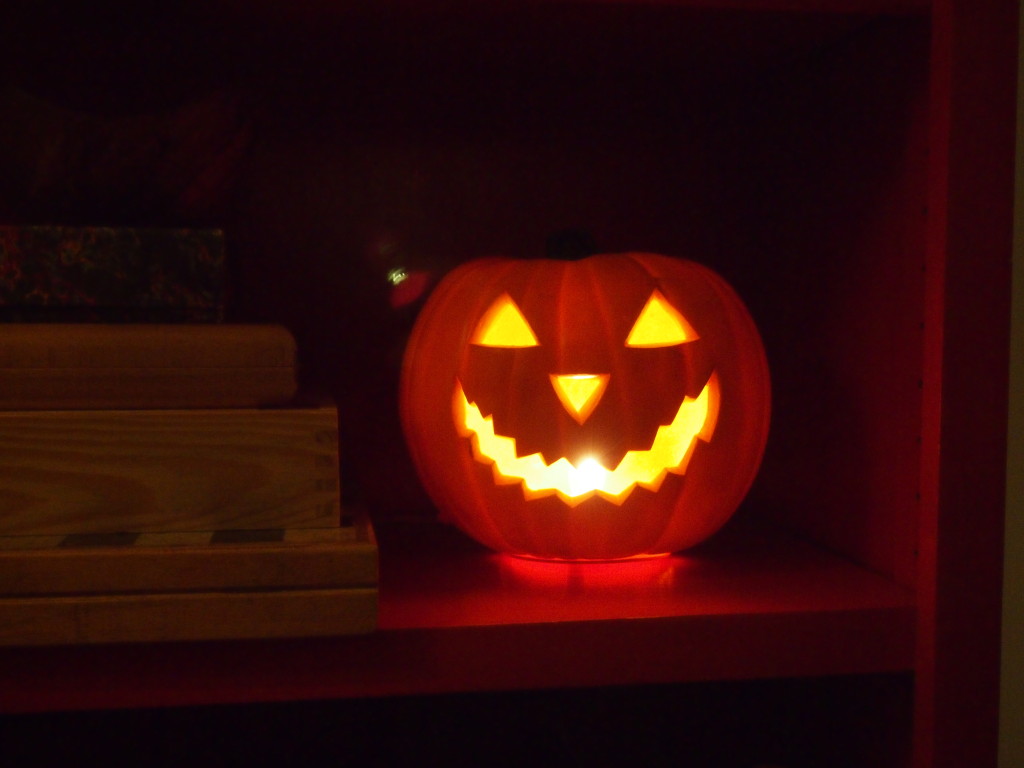 If you read regularly, you know that things have been rocky for us lately. I haven’t been able to do much of anything creative. But I want to, and I’ve been collecting inspiration.

It started with this: 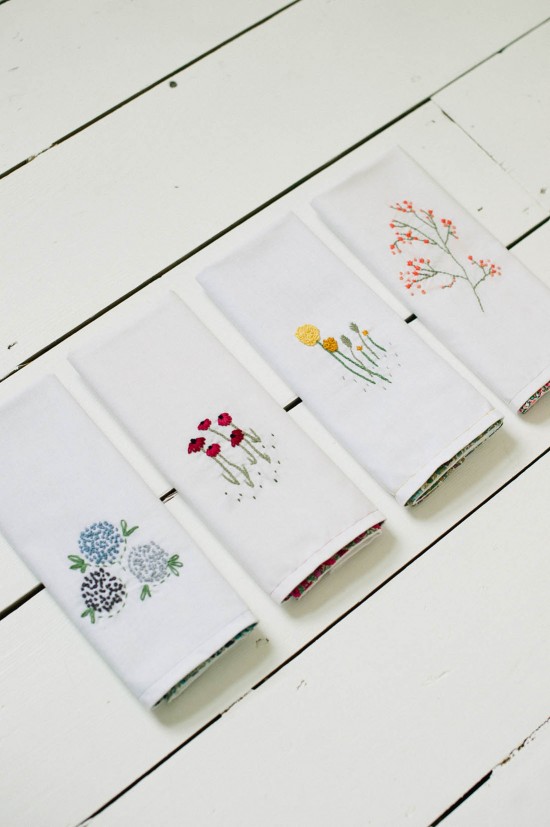 Image via Apartment Apothecary. Click on it to see a nice tutorial.

She has this set of china:

When I was younger, I thought it was so boring. Now, I think it is classic and beautiful–and would look lovely with embroidered napkins.

She also has painted wine glasses similar to these, which she often uses with the china: 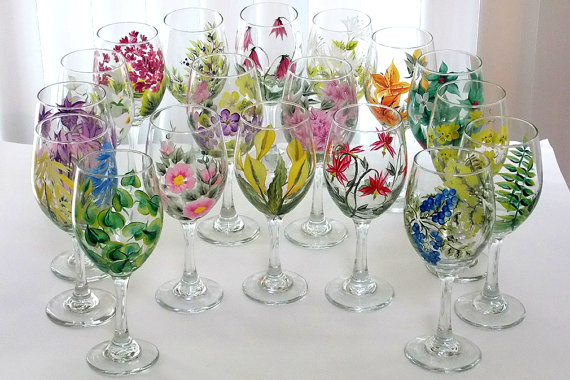 I haven’t done much embroidery since I was a  teenager, back when embroidery kits were a thing that crafty people did. 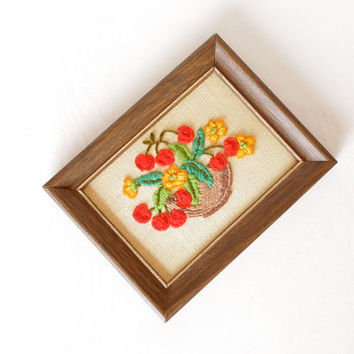 I did a little bit back in February, when I was working on the Valentine card that never got finished, and I think I’d like to dive further into this particular realm again. 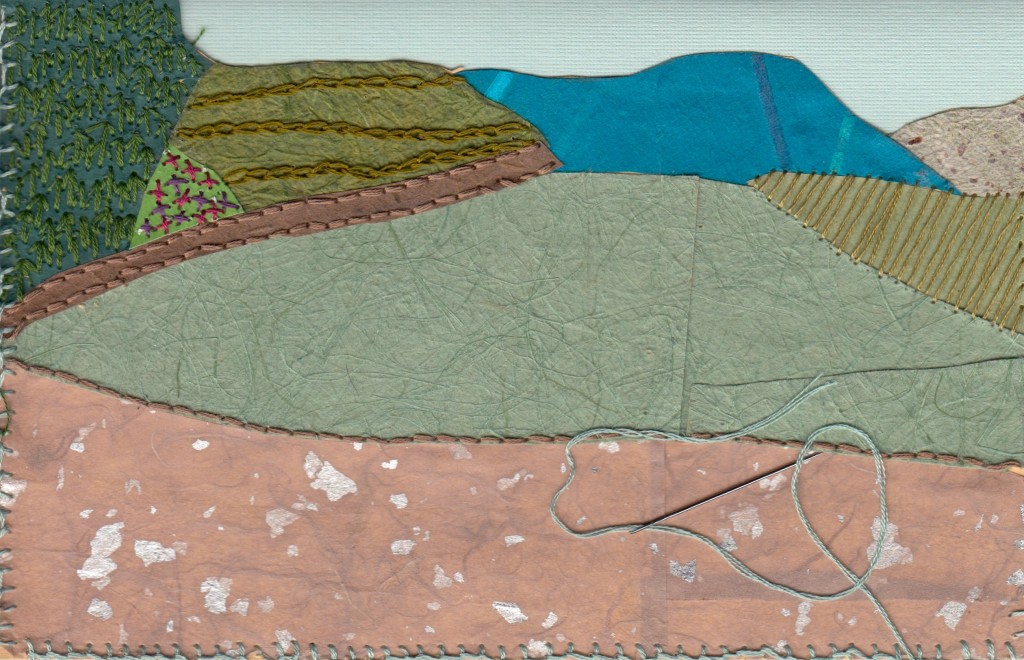 I haven’t gotten as far as really doing anything yet, but I have collected some inspiration:

I like the simple lines and old-fashioned sweetness of the flowers on these tea towels from Etsy shop PrettyPMamaB: 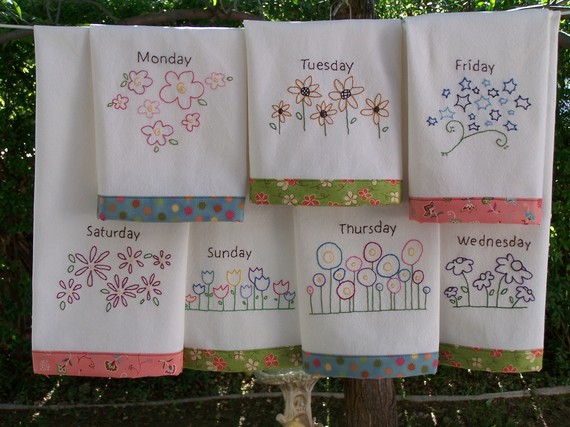 If I decide to go with this sort of look, I might create my own designs using something from vintage patterns such as these: 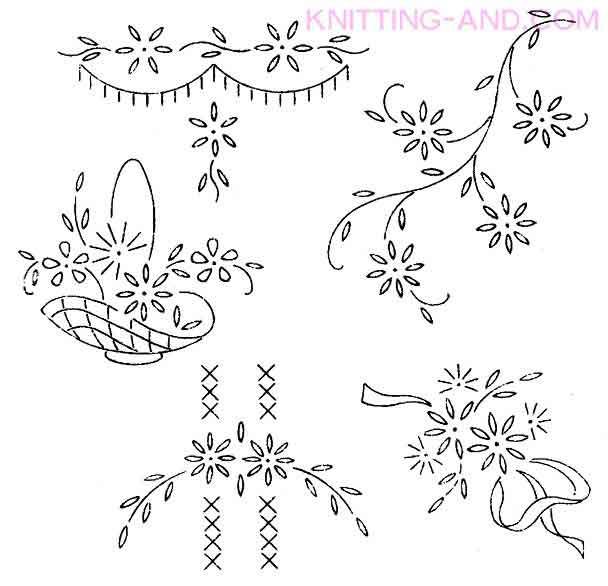 I’m also liking these images for a more modern take on florals with simple lines: 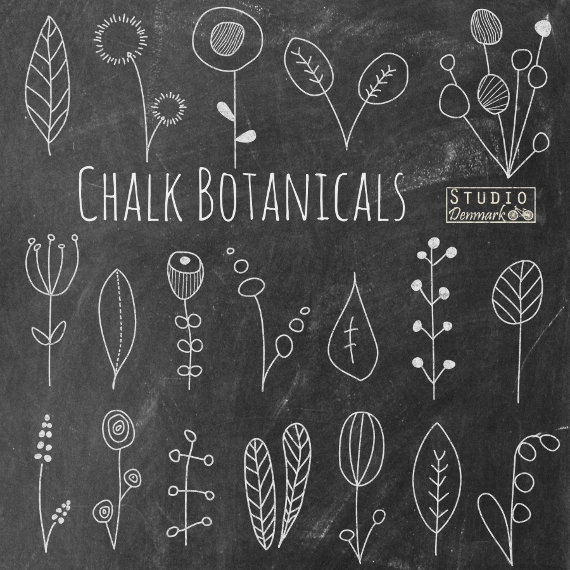 I could go in another direction and do something more modern/graphic. I like how this design grows out of the corner, which might be really cool on a napkin: 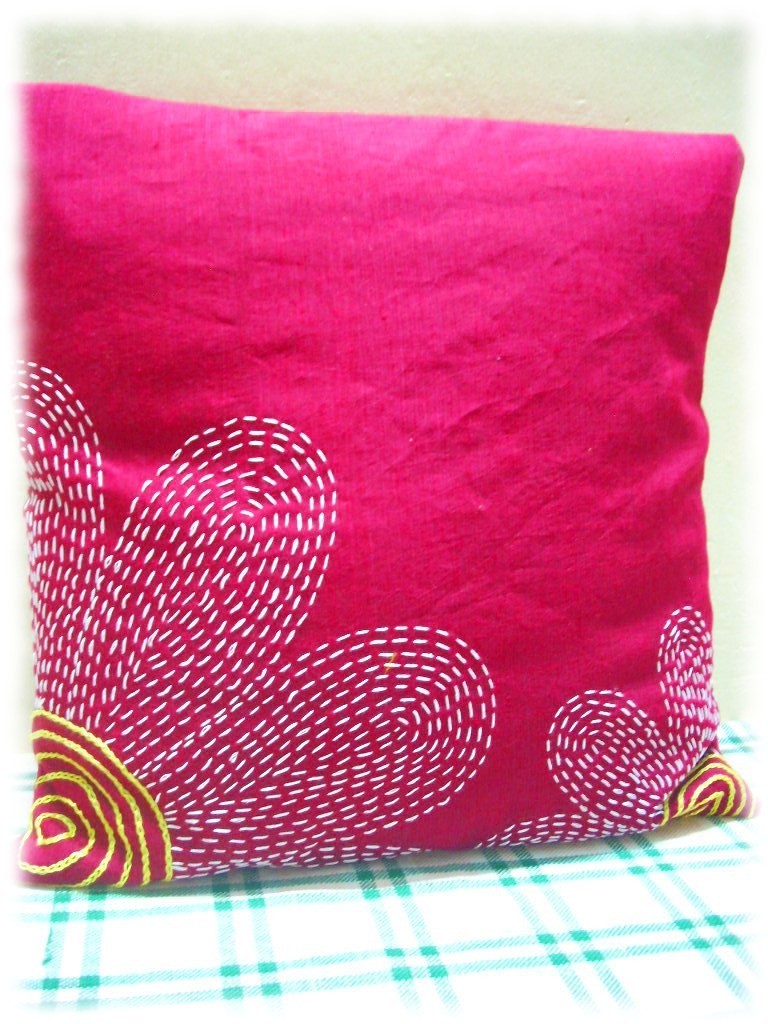 If I’m going to go more bold/modern/graphic, I’ve also got these for inspiration/creative-pump priming: 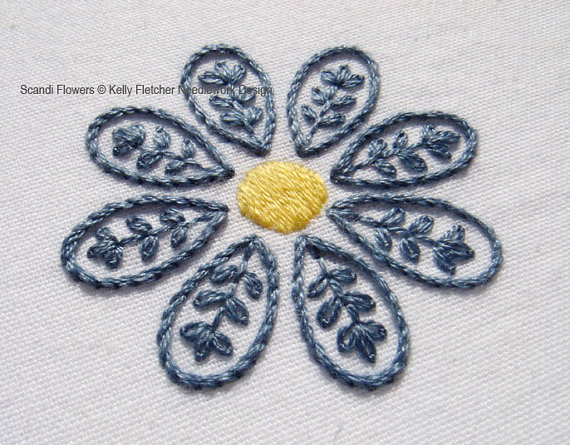 Image via The Createry 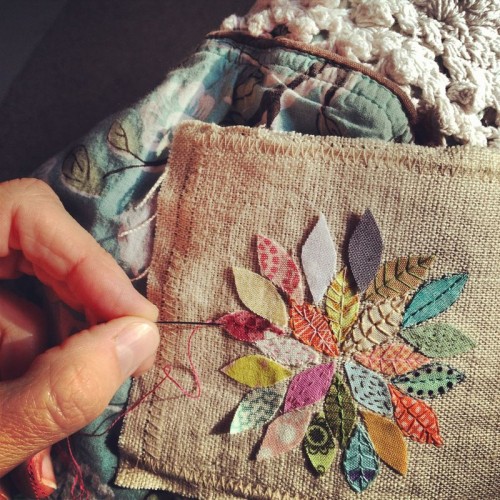 Image via The Fabric Shopper

I’m not really sure which way I want to go with this. My mom tends to like florals that are sweet and old-fashioned. (My taste runs more to modern/graphic.) Something like this might appeal to her taste and mine; I like the juxtaposition of the traditional flowers on a patterned fabric, rather than a solid: 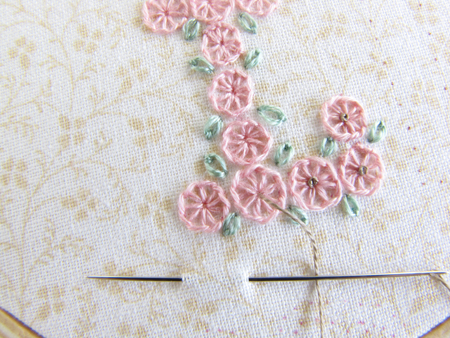 Image via Pretty by Hand

Some projects I do when in this kind of creative space don’t go any further than a Pinterest board. I think that’s OK; feasting on others’ work always feeds something in our own creative beast, so I never consider the browsing/pinning to be wasted time. But this one I’ve actually pulled the trigger on. I bought a tablecloth today (although it could be returned if I decide to bail), and I went to the fabric store to see what I could see. 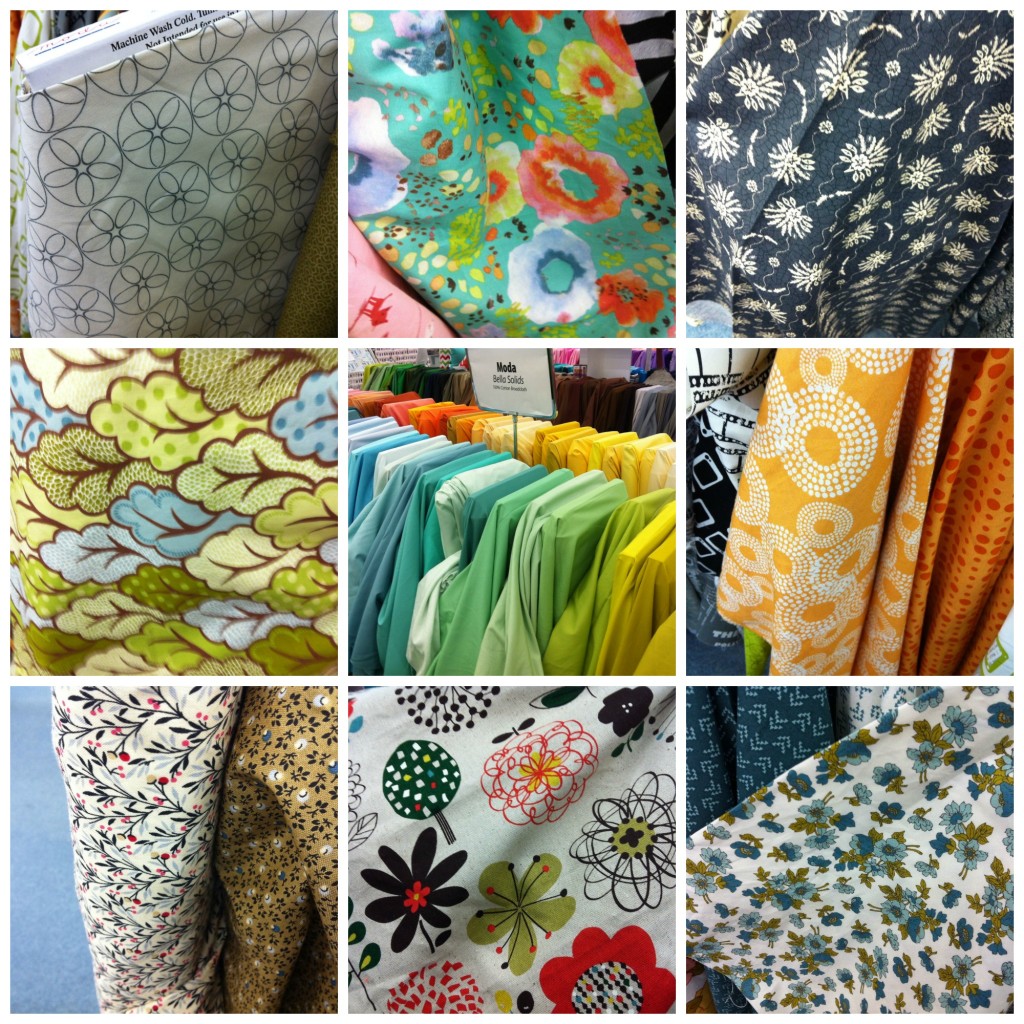 Clearly, I saw a lot and emerged with no coherent vision for this project. That’s OK, too. I’ve found I need to have a scouting trip, where I just look a lot and snap photos with my phone. The first visit is always overwhelming, but I let what I see stew around a bit and soon a direction emerges.

I hope to get back there this weekend, but it is Halloween and who knows how it will go. Luckily, there’s nearly two months until the gift needs to be given, so I think I’ll be good.

In the meantime, going to sign off with a throwback picture that always makes me smile. I loved these years with these two: 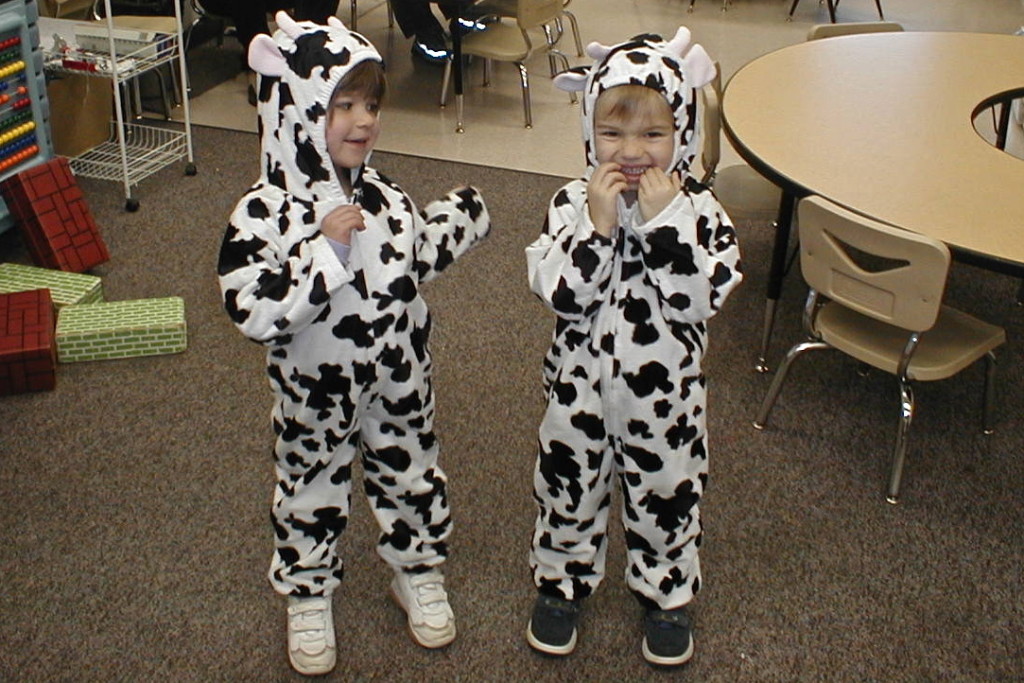 They were not the creative costume years. 🙂 Those came later…