I see so many cool things in the course of my days–potential projects are everywhere! Most come into my viewfinder and pass right out, but some I feel compelled to capture with my phone’s camera, always sure that I will make something just like that cool something I’m seeing.

Guess how many of these dream projects I’ve actually tackled?

Actually, it’s kind of hard to say. It depends on how you define “tackled.” To make me feel like there might be some purpose in all these near-hits that are pretty-much misses (so far), I thought I’d like to put them in one place here and share them with you. Maybe they’ll inspire you to make some great something? And then I can feel better about it the next time I take a picture “for later.” 🙂 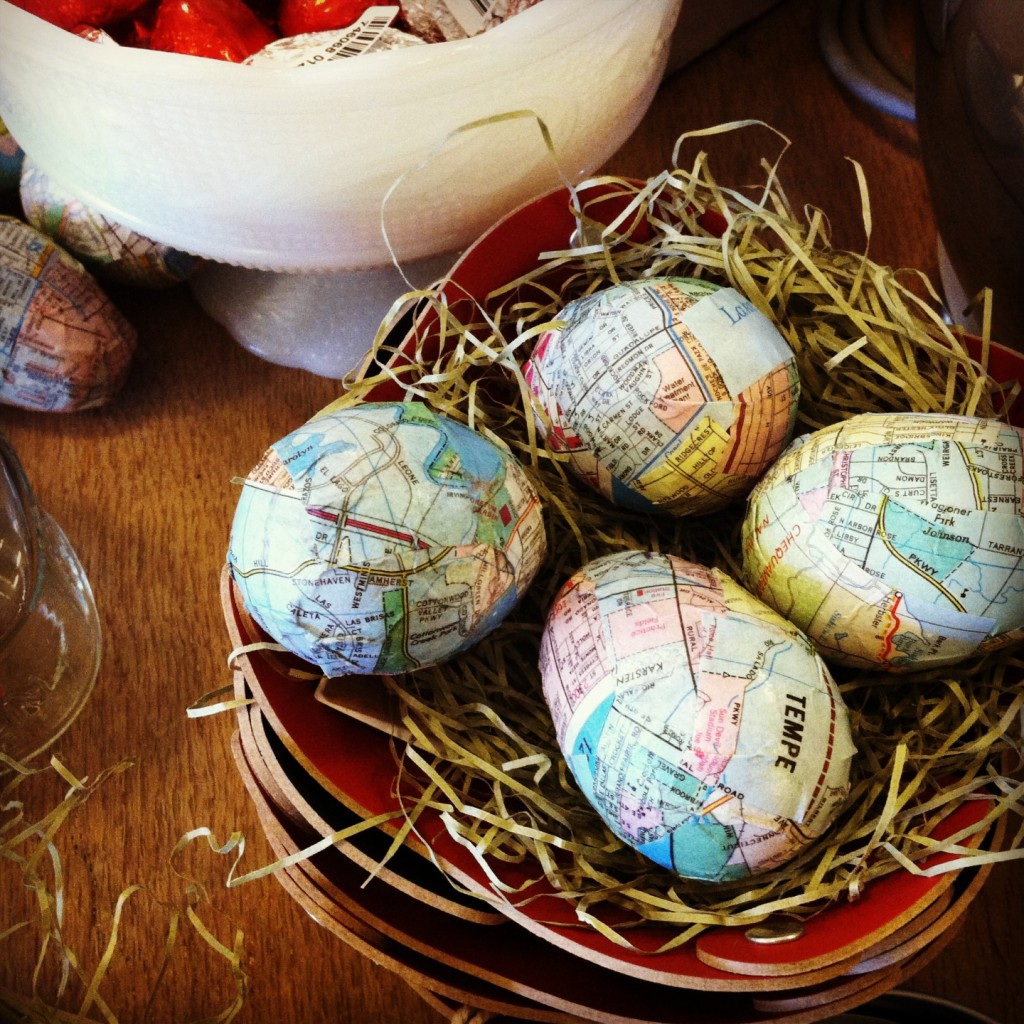 Aren’t these super-cute/cool looking? I’ve never come close to making anything like these. I’ve gotten stumped on what to use for eggs. I know I could blow out the insides of some raw eggs and then mod podge some kind of ephemera to them, but blowing out the inside of eggs would likely make me dizzy. Or get a migraine. And I hardly decorate for Easter, and don’t really like the idea of decorating for holidays or seasons…Still, I really like these. Maybe next spring… 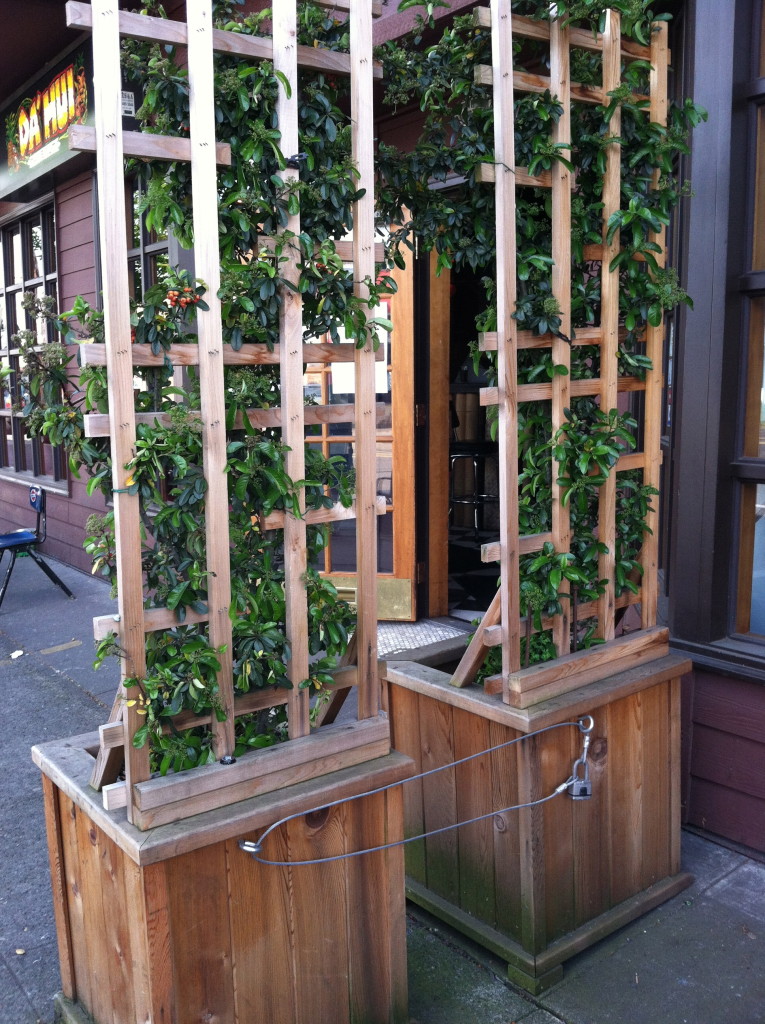 This one we actually kinda did. Sorta. We wanted to build a screen to hide our garbage cans, and we wanted the screen to contain plants. We found these outside a restaurant somewhere, and I thought they were pretty ingenious. Our version was pretty similar. I’m going to call this one an inspiration-turned-action victory!

Except, sadly, that screen is no more. It got pulverized in a bad windstorm last winter. How quickly one can fall from the thrill of victory to the agony of defeat!

OK, so I was never gonna make a garden for fairies. But something about this was just so stinkin’ cute. And it’s made in an old chair, which I have a well-documented soft spot for.

Because I went cold turkey on chairs that need rehab, I don’t have any likely candidates for this project. But I have jumped on the succulent bandwagon and have several in our house. Nothing as twee as the little vignette above, though.

Um, yeah:  This was taken at Chipotle. I no longer remember why I thought we needed pegboard with giant holes or where I thought we’d put it or how I thought we’d make it, but I do remember thinking this looked cool. Still do. Never going to to this, however (all those pesky why/where/how questions I can’t answer). 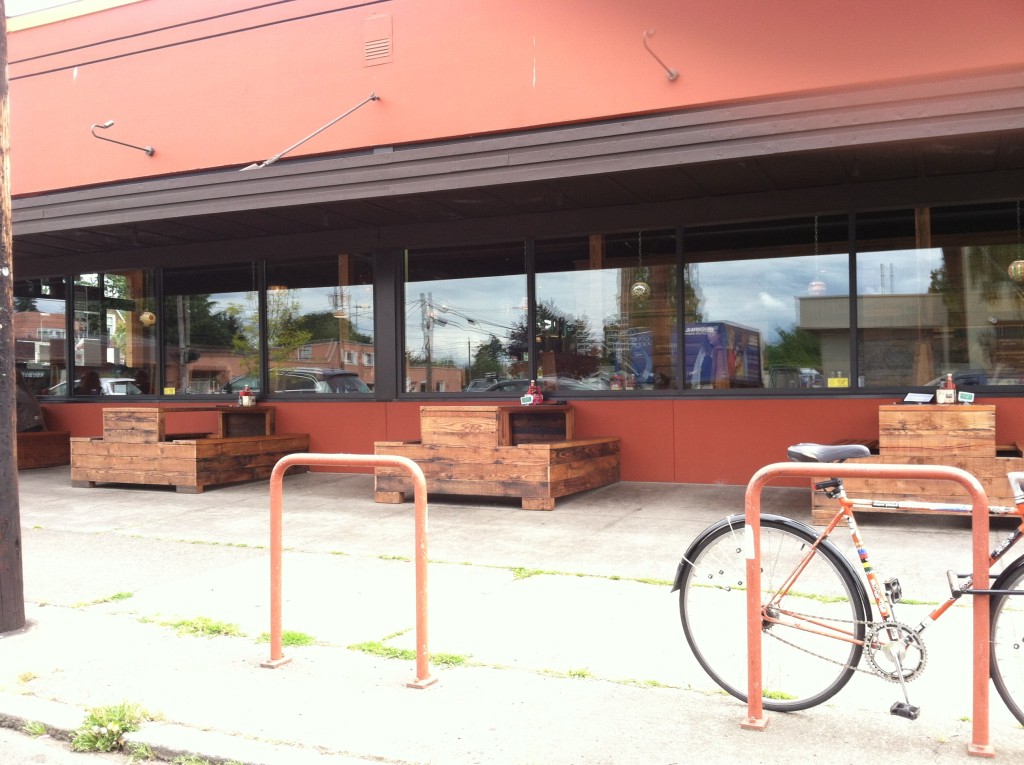 I’m not really sure why I thought these tables were something snap-worthy. What they look like to me now is expensive. Maybe it was that they looked easy to build? We still don’t have a well-functioning picnic table, but we talk about building one every once in a while. 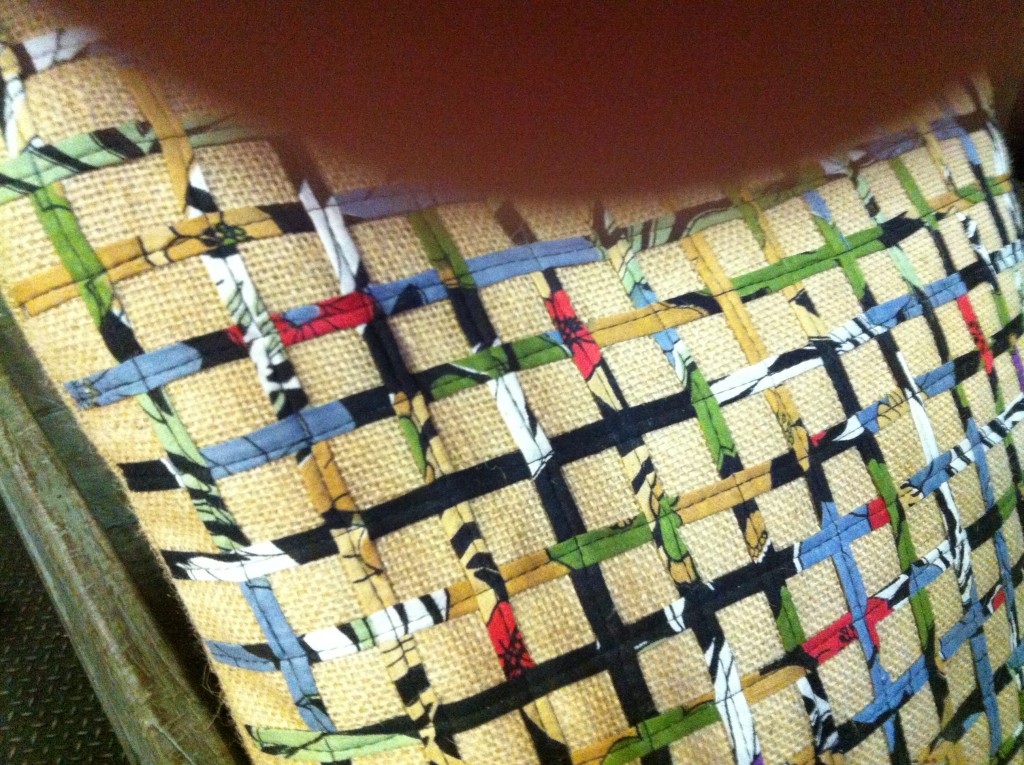 Gotta like the finger in this one! There was something about this pillow I thought was way-groovy. Still do, and this is one project I actually started. Got stymied by the very thin strips of fabric. Several burned fingers (from the iron) later, I abandoned it. Should have known fingers would be my downfall with this venture.

We did some renovation work on our bedroom this summer, and I tried to convince Cane that this could make a super-cool headboard. He didn’t share my vision. 🙂 But there’s something about this super-sized embroidery that’s really appealing to me. Makes me want to embroider something with big, chunky fibers of some sort. It could happen. 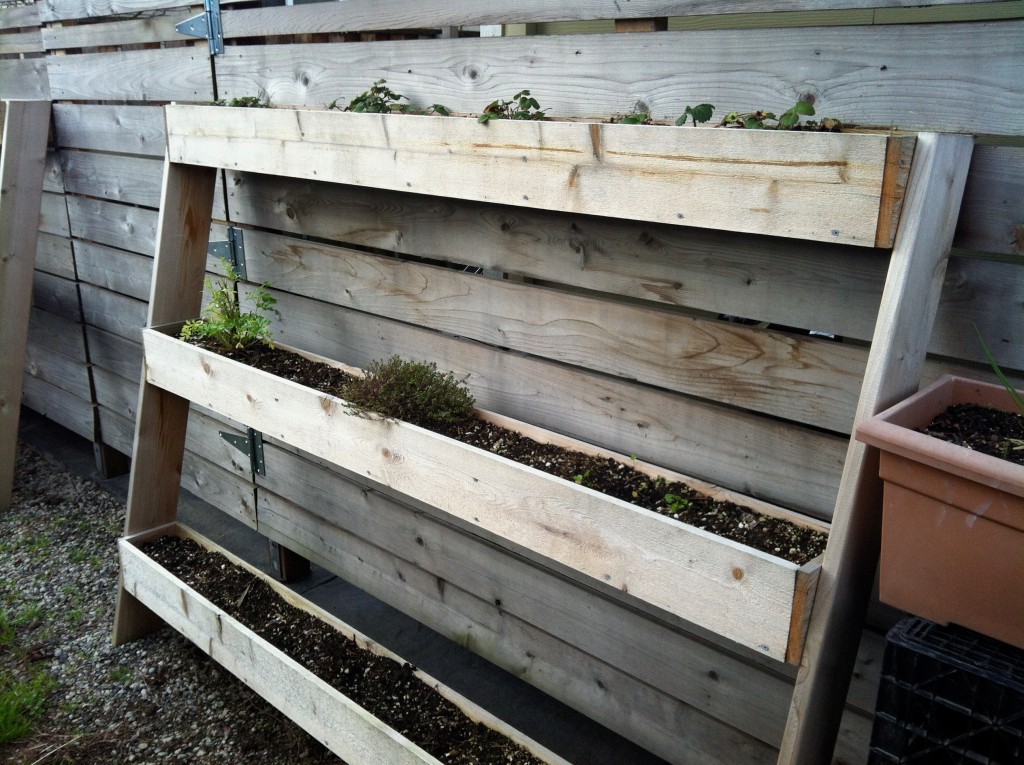 I liked this take on a vertical planter–maybe because it doesn’t have to be attached to the side of the house. Something about this design appealed to me. I can’t really remember what it was now, but I still like the planter all the same! 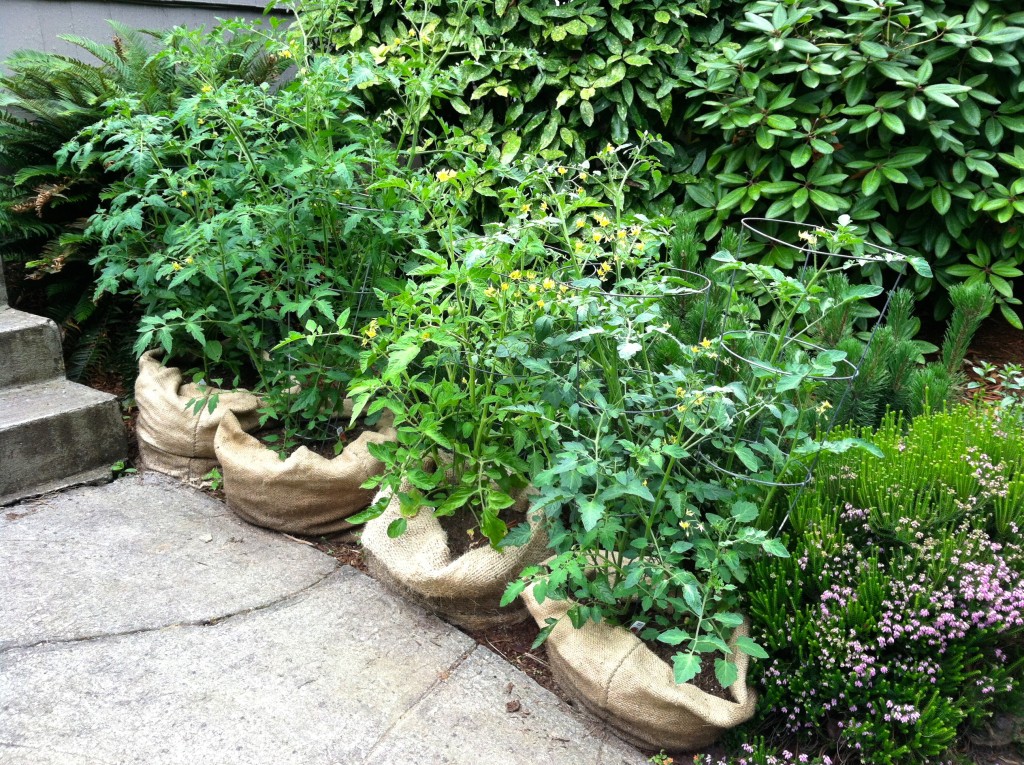 Speaking of planters…I just thought these were clever. Burlap is so inexpensive, and making these would be a lot easier than building a box. For me, at least. But this is another one on the list of projects not done. 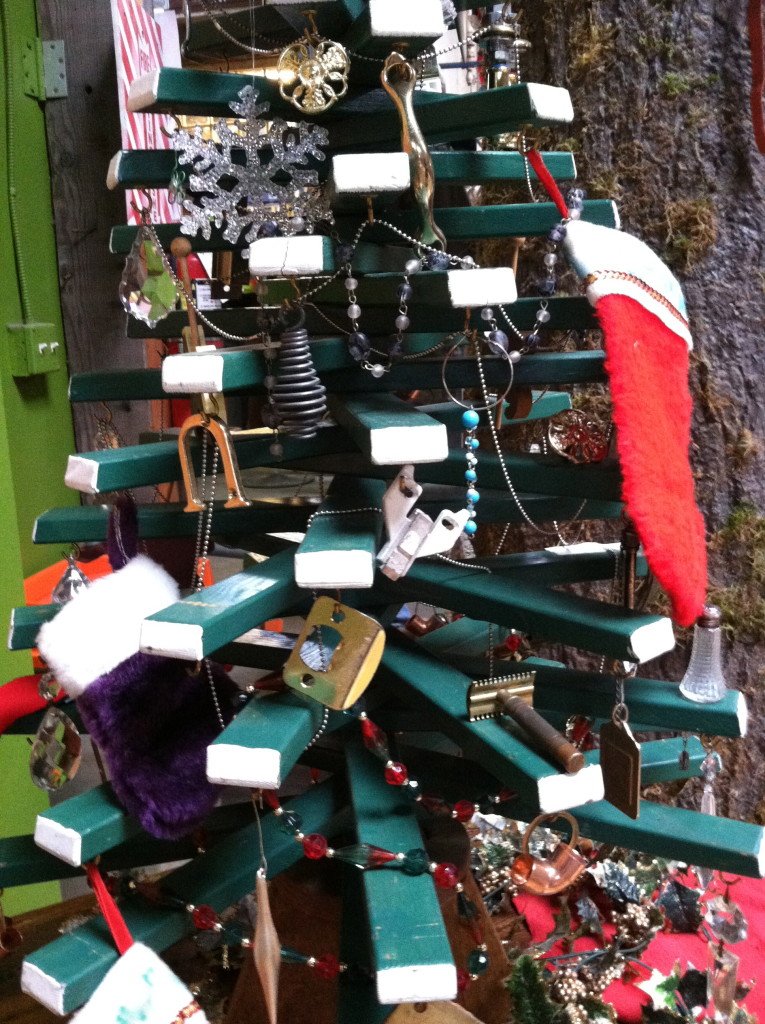 “Just think! We’d never have to wrestle a real tree into the house again! No more needles to sweep and vacuum! And it’s recycling instead of killing a tree! It’s UP-cycling, actually. With house parts. And we’re all about houses and re-use and all that junk!”

This right here captures everything about why we are generally a good team. 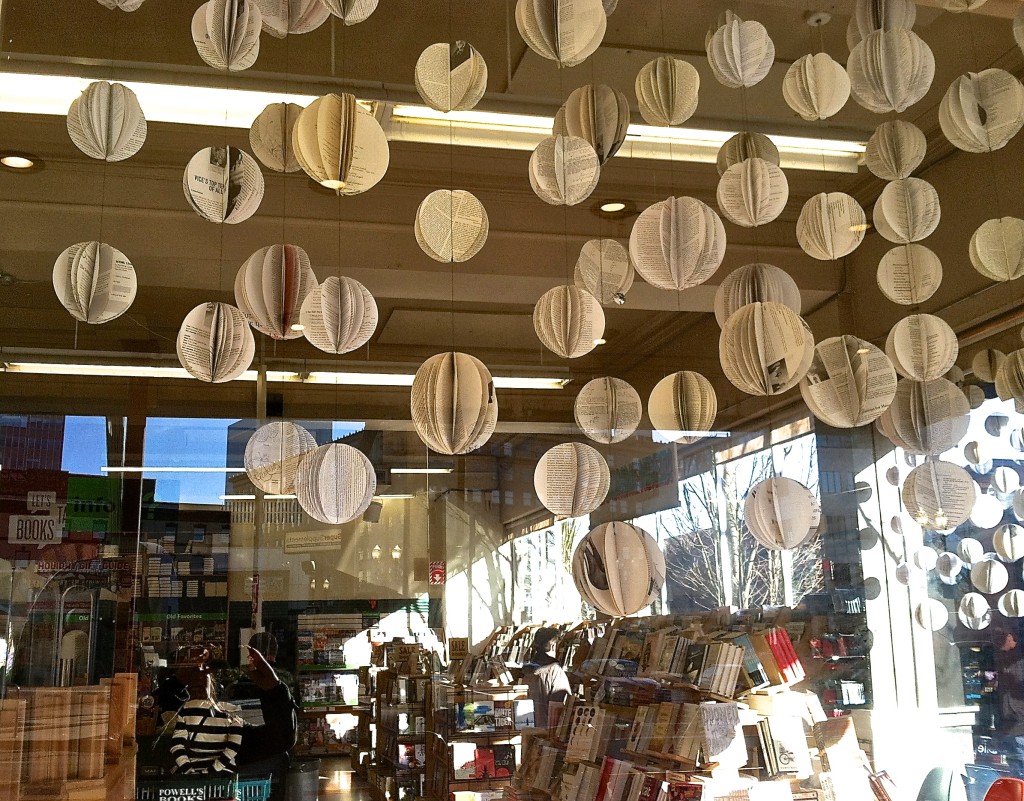 I am not a big holiday decorator. (I’ll spare you all the reasons why.) But I have loved and longed for these ever since I first saw them 3 or 4 years ago at Powell’s bookstore, where they are hung for the holidays. Thanks to a bountiful source of discarded book pages, I have the paper. Last year I even went so far as to research how to sew a thick stack of paper, and I bought a special needle for my sewing machine. I also bought a cool gizmo to cut the paper into circles. Still haven’t made them. Maybe this will be the year…and I’ll make the mappy eggs right after I make these.

Am I the only one who sees inspiration everywhere? You want to tackle any of the projects I’m not going to get to? (So many projects, so little time…) If you do, I would love to see your results. 🙂

27 thoughts on “Everywhere you look”