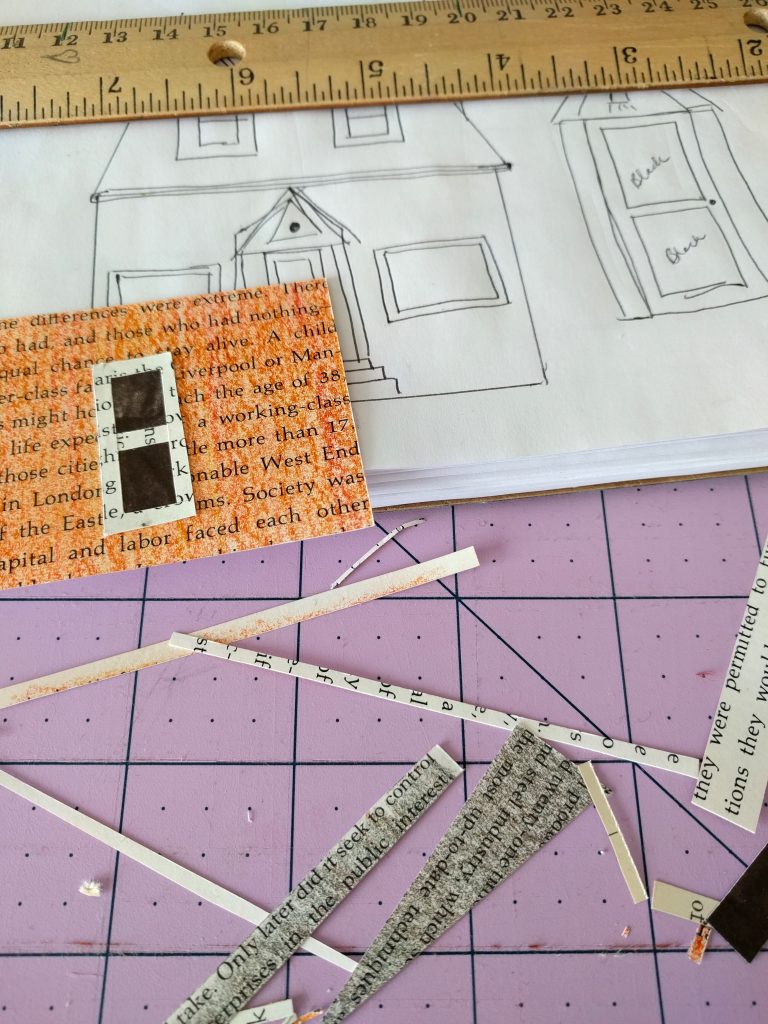 A few posts back, Marion pointed me to the work of Amanda White, who makes wonderful collages of writers’ houses. (You can see some nice, large versions at Brown Paper Bag.) 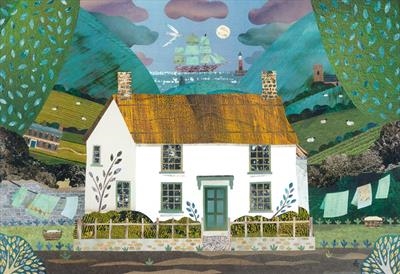 I love the way creative communities work. If Marion hadn’t done that, I might never have gone down the road I have with that initial impulse I had to make something about houses. I love White’s work so much. (Collages, houses, writers? All in one? Yes, please.) It sent me on a Google search for collage houses, and oh, the things I found! (Rather than linking to them all here, I’ll just send you to the Pinterest board I created to store them in.)

Once I discovered these, I lost interest in the  map houses I was working on (which is part of the reason I just finished that project, even though I thought it was crappy). I wanted to create houses with more detail.

A bit about process

The first thing I did was head out with my phone to take pictures of houses I like: 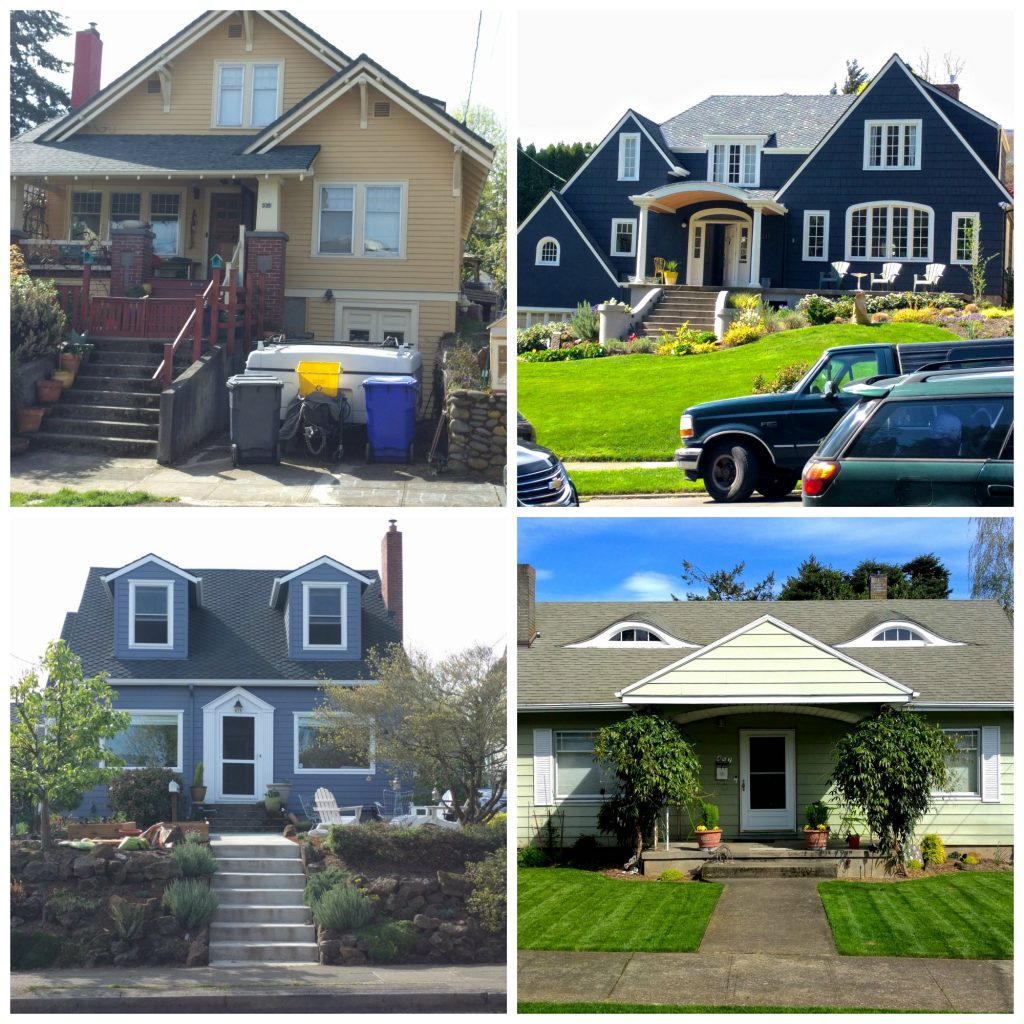 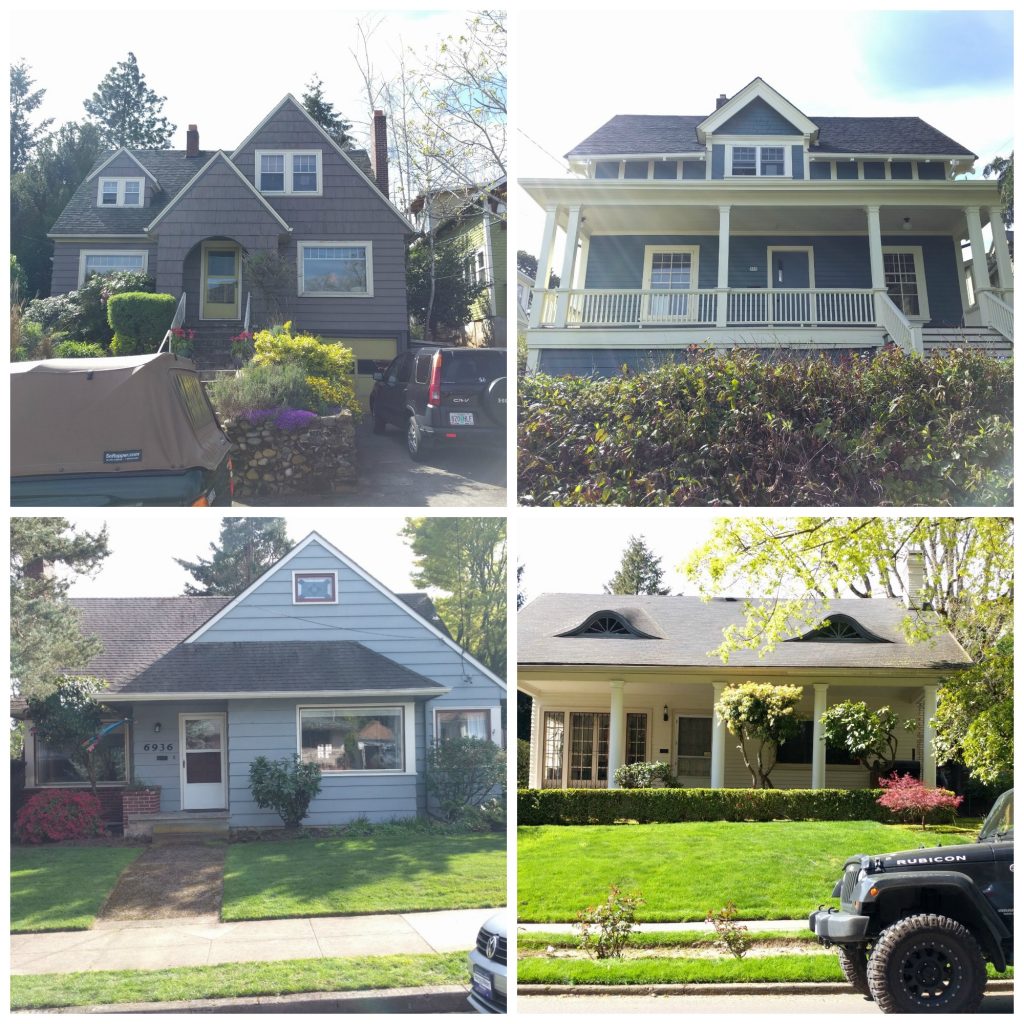 I was looking for houses that reminded me of my grandmothers’ houses, and I was looking for houses that I thought I might be able to re-create. (As  you can see, I didn’t focus on taking great photos. I really just wanted to snap as many as I could as quickly as I could. After making one house, I now know that I need to take the shot as level and straight-on as I can. Maybe later I’ll want to try making houses from different angles/perspectives, but not yet.)

The next thing I did was attempt to sketch some of the houses, because I knew I’d  have to draw the parts on the paper I would use to make the collage. I remembered my lessons from Ed Emberley, and I focused on breaking each house down into its shapes. When I do this, drawing isn’t quite so daunting. 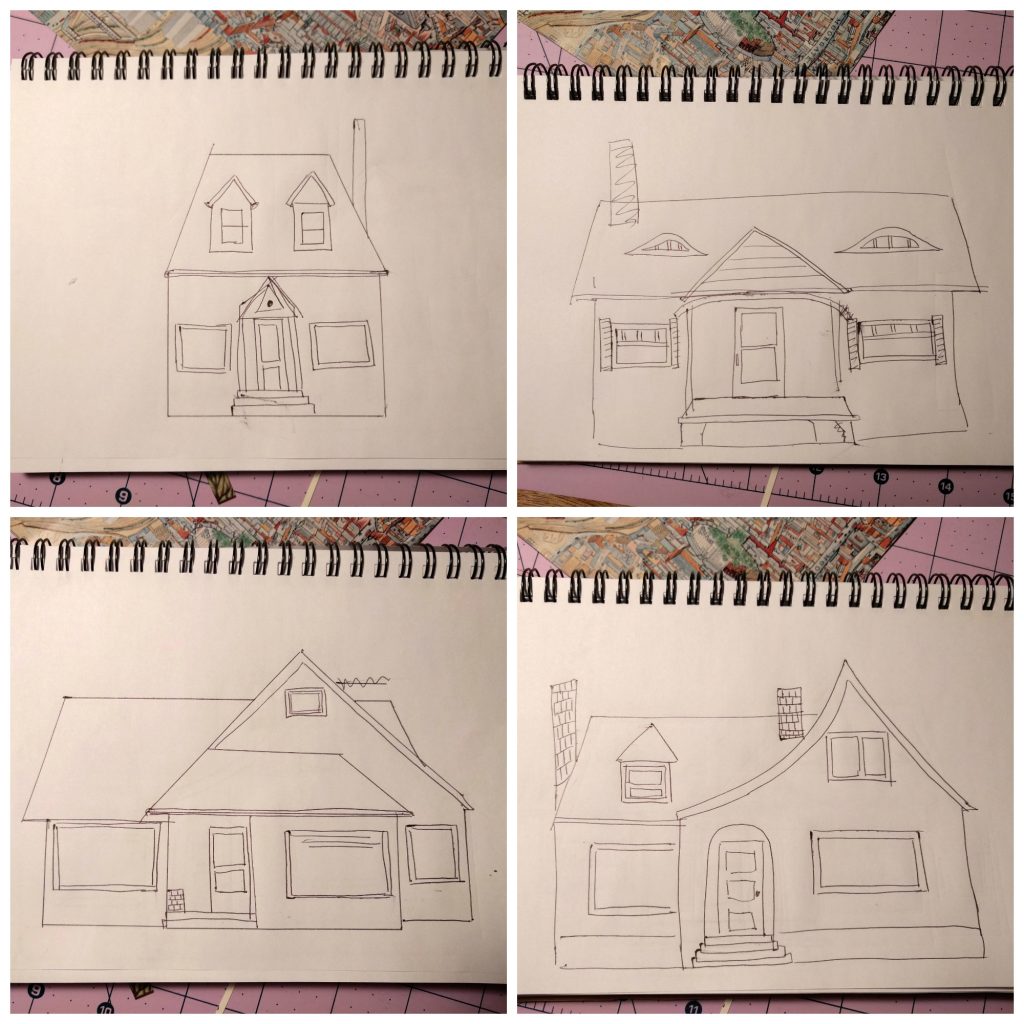 Nonetheless, I’m thinking about trying to find a drawing class to take this summer.

I started with the simplest house I could find, and as I started to figure some things out, I moved on to more complex ones. I found it was really helpful to have the photos to help me. I would measure the dimensions of the shape in the photo, and I used that to get scale correct(ish).

Then it was on to making a house. Again, I chose the simplest one to start with (top left in the photo collage above, which is from the house in the bottom left of the first house images photo collage).

For materials, I decided to use paper from old books I have. I thought about not coloring them in any way and trying to use varying fonts and type sizes to create color and texture, but I decided I’m not that good yet. I used watercolor pencils instead. I cut out blocks of text, and then used layers of pencil color that I rubbed together with my fingers. 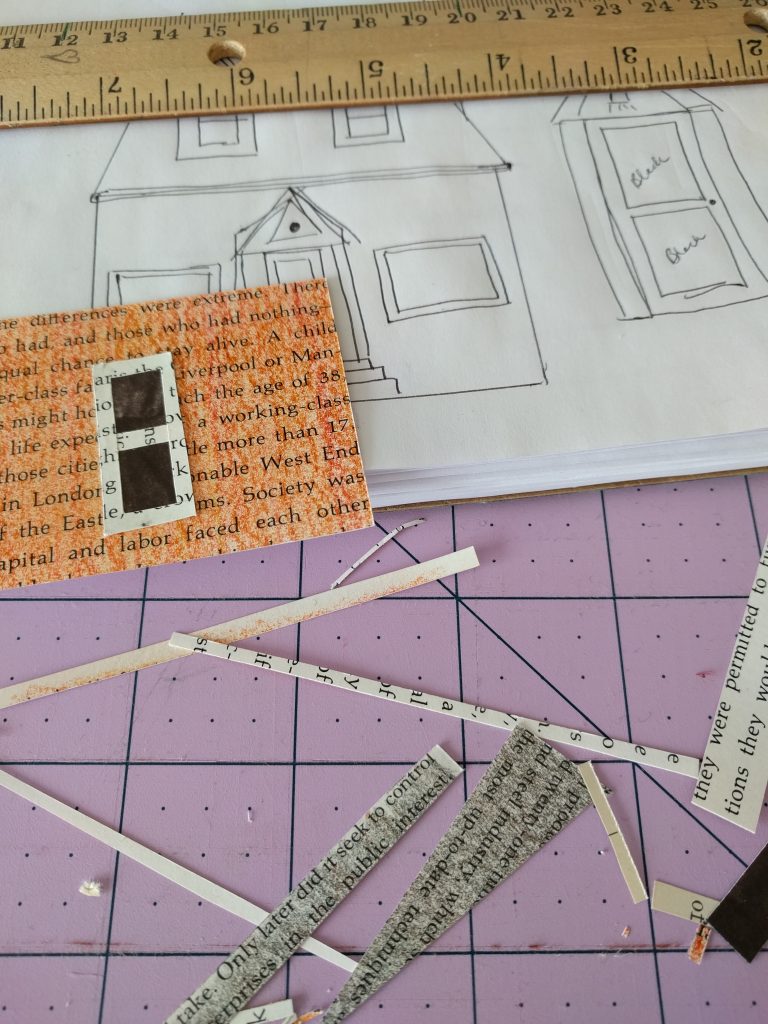 When I went looking for text to use, I found I didn’t want to use just any old random text. I have two books for cutting with information about the industrial revolution and the horrible living conditions that most working-class people lived in during that time. That seemed like fitting text (more on that later), so that’s what I used. 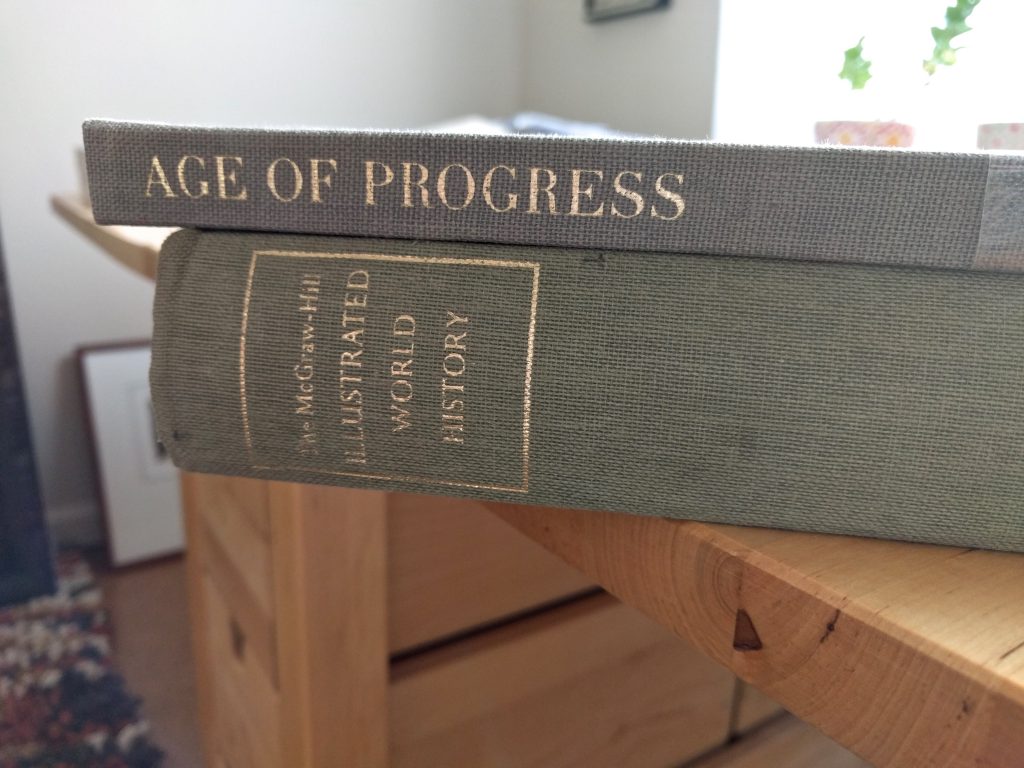 Then it was a matter of cutting out my pieces and gluing them together.

I say that like it was a simple undertaking, but in truth it was hard and very slow-going. I learned that I have to build the houses in component parts (doors, windows, etc.). I’m careful about when I glue something down–because if I mess up and have to discard something, it might mean discarding several components if they are already glued together. (Ask me how I learned that!) 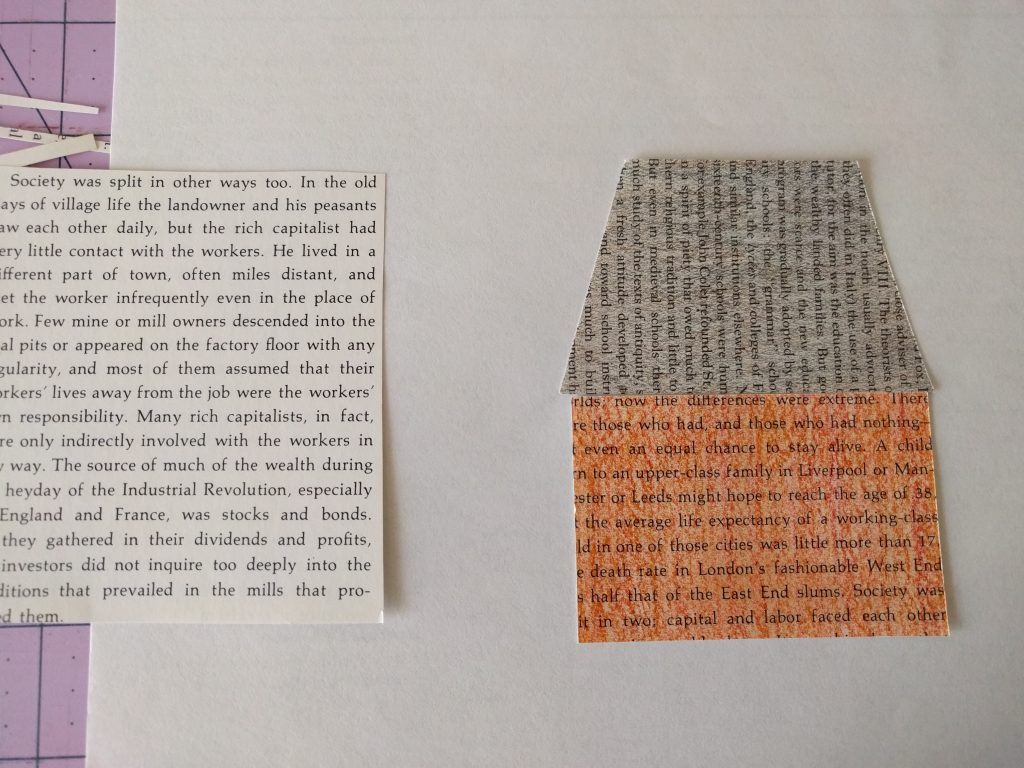 This was not the only roof I made.

I can’t believe it took me two weeks to make this simple house, but it did. The chimney alone probably took an hour. 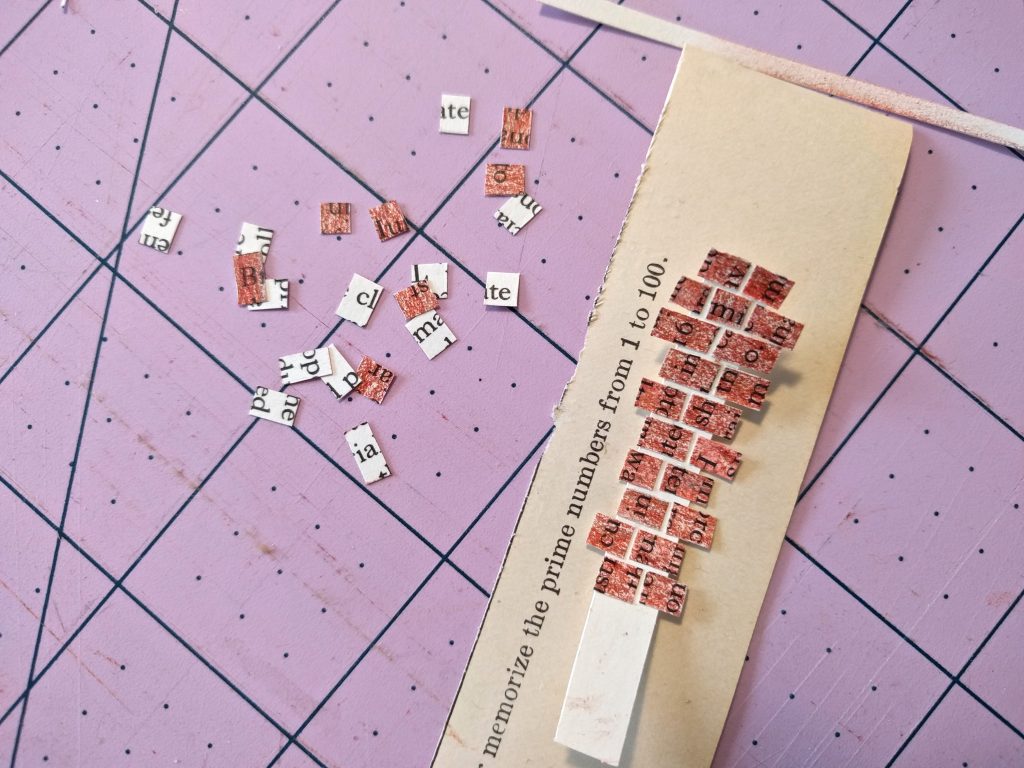 So many teeny-tiny bricks…

I will be combining this house with some words and with some other elements, but this is what I have for now: 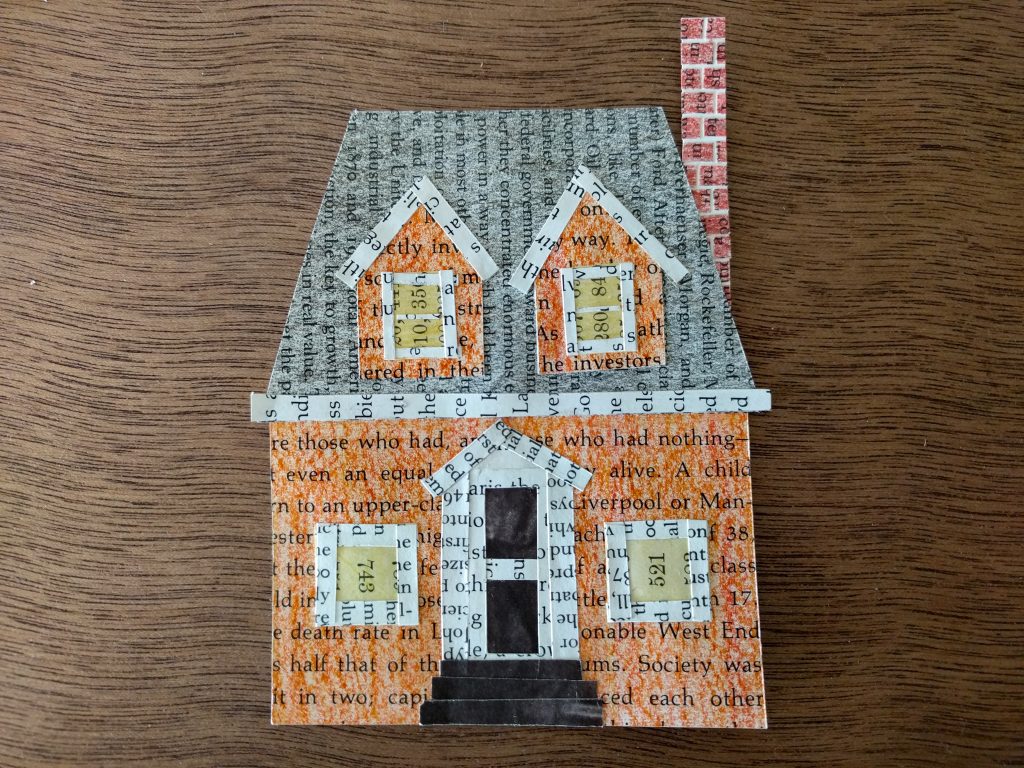 It’s not perfect, but I’m much happier with this than I was with my first draft houses. And I can’t wait to start house 3.0. 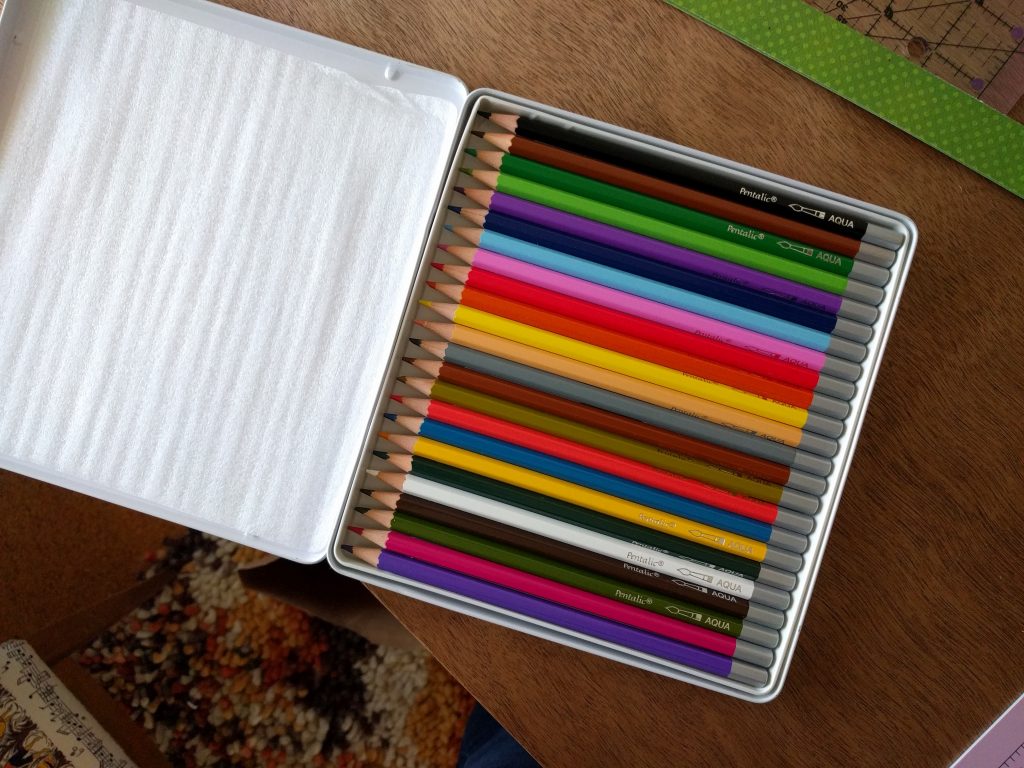 Doesn’t a new set of pencils make you feel like you could create amazing things?