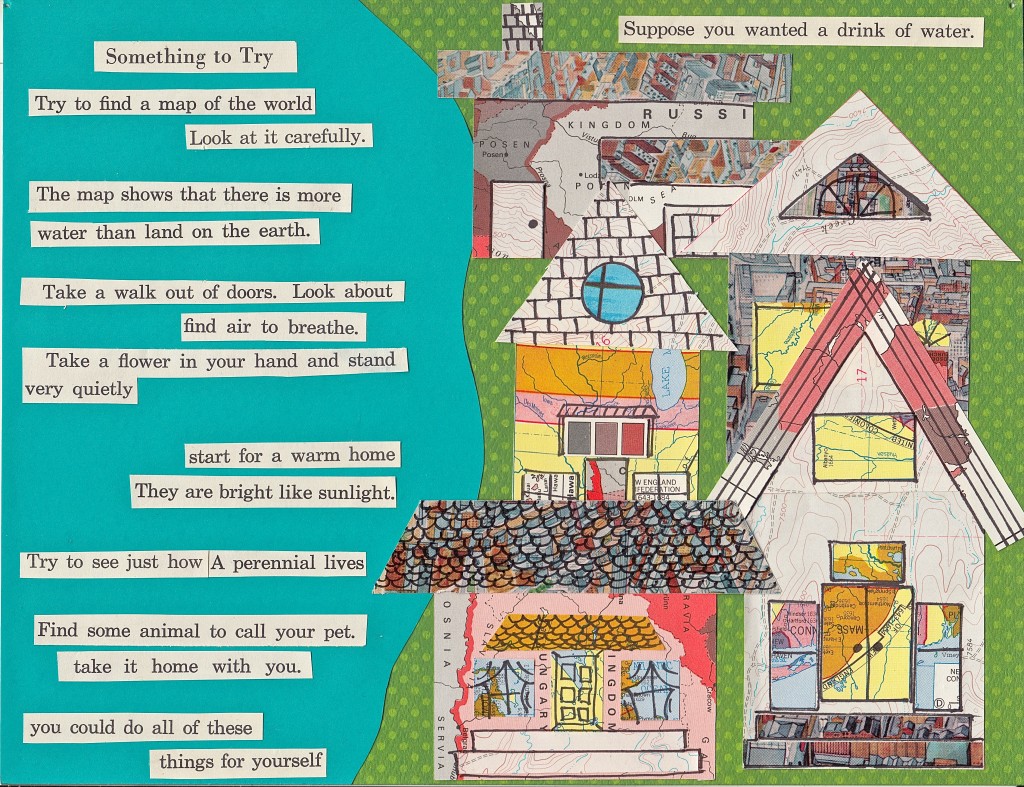 So that is my collage poem/art about home.

Don’t spend any time trying to figure out something nice you can say about it in the comments. I know it’s not good. It is not at all what I could see in my head as I was making it. And that’s OK. I’m even going to call it more than OK.

Somewhere around the time I laid down some crappy-ass Sharpie on the houses, I knew it wasn’t going to be what I hoped. I thought about chucking all the houses and starting over, but one thing that came to mind was Anne Lamott’s famous words about shitty first drafts.

I was feeling fairly paralyzed until I started thinking of this collage as a first draft. I mean, I really wanted my whole houses from maps and collage poem about houses thingy to work out differently. When I realized it was going to be crap, I contemplated starting over with it. But then I started remembering Ira Glass’s words about being a beginner. I’ve referenced them before, but today I’m going to put (some of) them right in front of you:

But your taste, the thing that got you into the game, is still killer. And your taste is good enough that you can tell that what you’re making is kind of a disappointment to you. A lot of people never get past that phase. They quit.

Everybody I know who does interesting, creative work they went through years where they had really good taste and they could tell that what they were making wasn’t as good as they wanted it to be. They knew it fell short. Everybody goes through that.

And if you are just starting out or if you are still in this phase, you gotta know its normal and the most important thing you can do is do a lot of work. Do a huge volume of work. Put yourself on a deadline so that every week or every month you know you’re going to finish one story. It is only by going through a volume of work that you’re going to catch up and close that gap. And the work you’re making will be as good as your ambitions.

(One of many sources for this here.)

Let’s look at it again. Like all first drafts, there are some glints of promise. Some sparkles of potential. But, let’s not deny how it is also, right now, pretty damn shitty:

I look at this, and I know Glass’s words are true, and sometimes this truth is disheartening.

When I was parenting younger children, I just didn’t have enough time to do a huge volume of creative work. (And that’s a truth, too, despite all the creative gurus out there who tell you that if you want it bad enough, you’ll make the time. Don’t believe me? Read Kelly Diels’s piece on time confetti, and then let’s talk.) Although my kids are less time-intensive than they once were and are preparing to leave my nest, I still have heavy time commitments to others.

But here are some other true words, too, that my friend Alexandra shared on Facebook over the weekend:

“When people start stopping, that’s when they start getting old.”

And who never quits.

That’d be the shit.

17 thoughts on “The good kind of shitty”

Leave a Reply to May Cancel reply