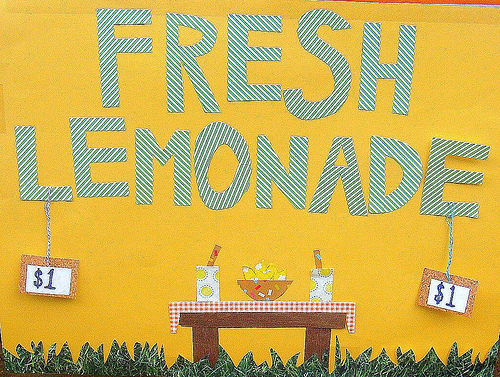 Last fall, a bedroom opened up in our house. This was not a happy event. In fact, it was a heartbreaking one, and as I’ve mentioned previously it means that Cane is now living elsewhere 50% of the time.

Because we are still trying to define and understand and figure out how to respond to what is happening, a reality that seems in constant flux, we don’t know when or how Cane’s daughter will live here again. Because my twins are graduating from high school this spring, things are up in the air with them, too. We really don’t know right now where any of the three will be living come September. There are all kinds of endings/beginnings and upheaval and loss and possibility and dread and anticipation swirling around us. 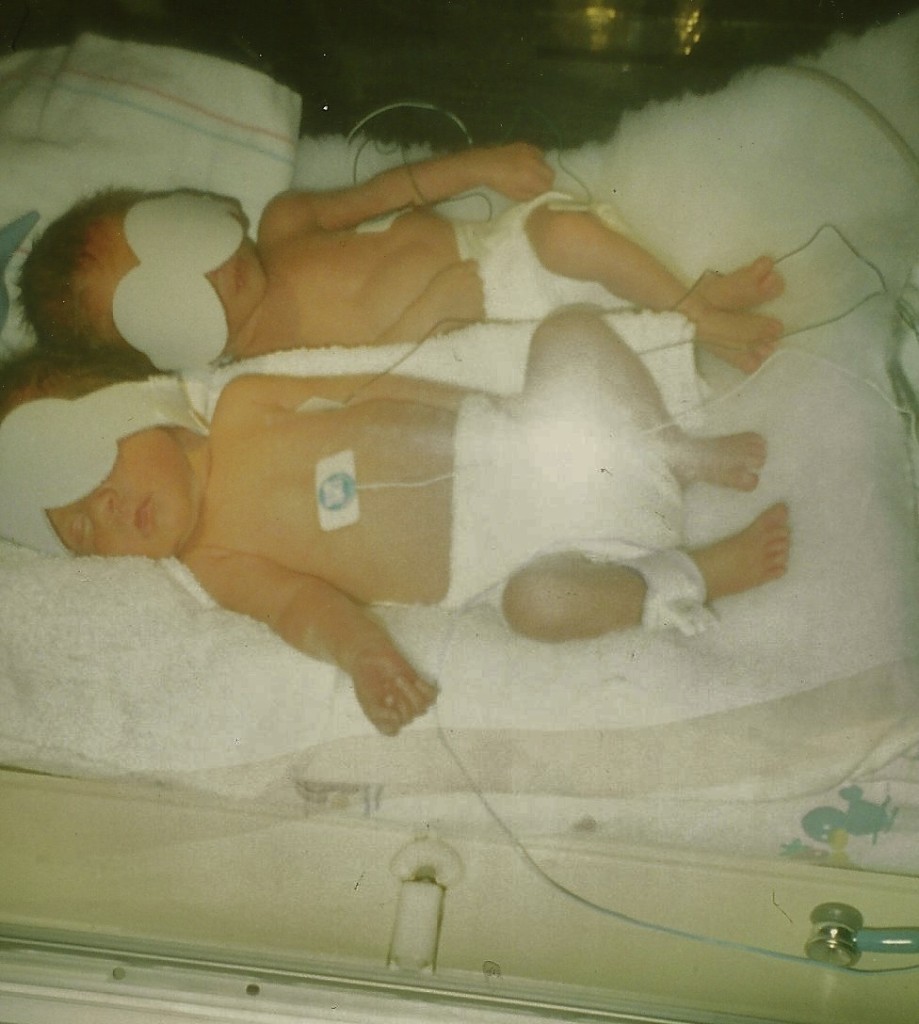 In some ways, things are not unlike this time, when much felt unsure and unknown.

For a short time the unoccupied room remained as it had been, a chaotic mess, a concrete representation of so much gone wrong. I could feel the weight of it every time I passed its door. When it became clear that the room would not be occupied for some time, I decided to clean it out rather than let it remain a shrine to our collective pain. I boxed up belongings and swept the floor and opened the windows to let in fresh air. There was little solace in it, but it felt right.

Except, the room itself still felt all kinds of wrong. When we first moved here, it belonged to my daughter, who painted it a fairly awful shade of brown. (We didn’t say that when she painted it, other than to each other. I think it’s safe to say it out loud now.) Cane’s daughter didn’t want us to paint it when she took over the space, so the color remained. After clearing the room of its belongings, despite all my cleaning, it was still a sad, depressing, dank, poopy-brown cave.

So, over winter break, Cane and I painted the room. 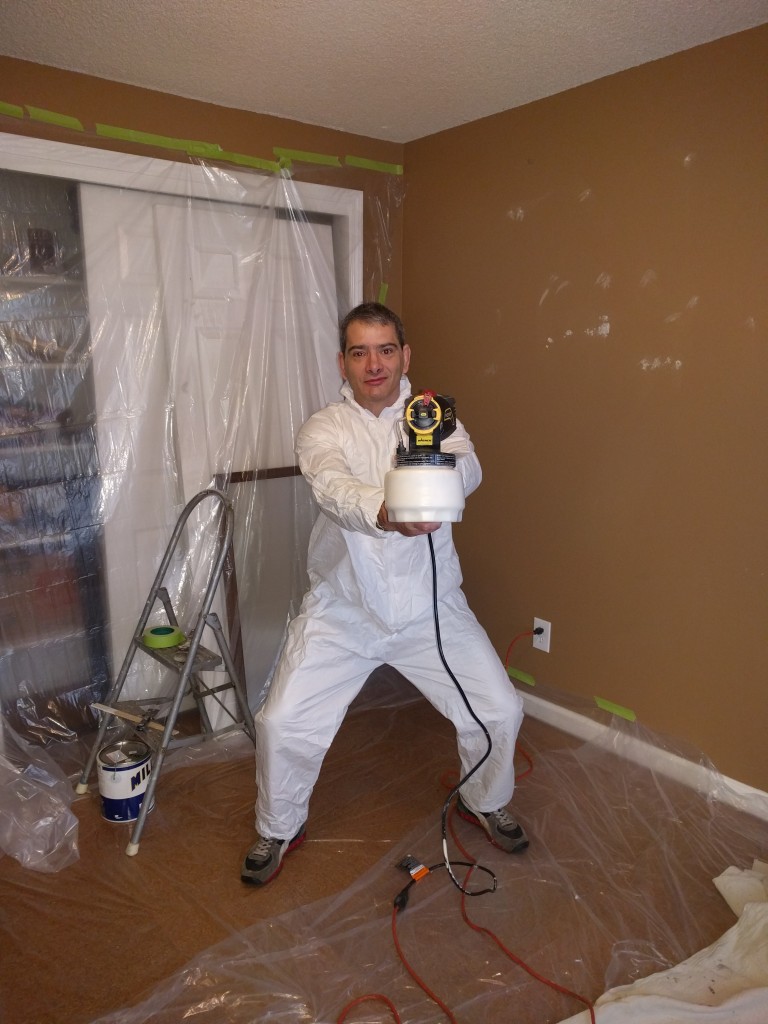 Donning the full-body suit to paint the popcorn ceiling with a sprayer.

The transformation felt miraculous. It changed almost instantly from a dark hole to a clean, clear canvas. 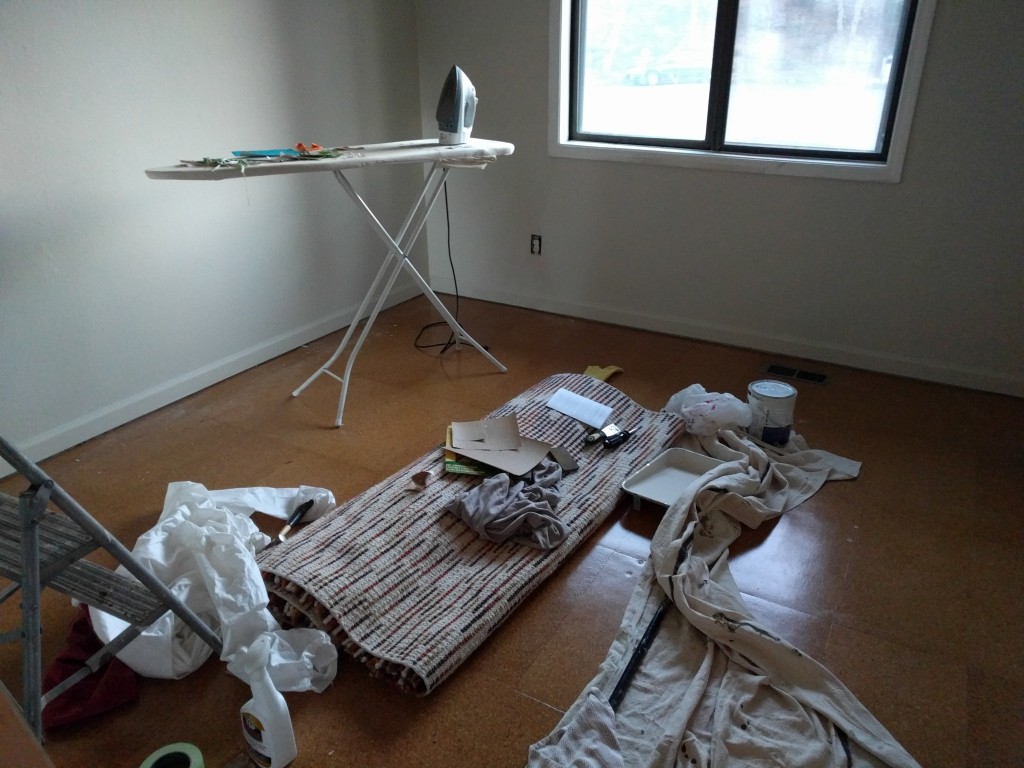 Not that I captured any good photos of it…

What to make of it? Maybe a sewing room? A guest room? Somehow a combination of both? Something, I thought, that can easily be dismantled when we need it to be a bedroom again.

On craigslist I found an Ikea table just like one we’d once owned with large sides that can fold down. I thought I could use it as a sewing/crafting table that would tuck up nicely when guests were staying in the room (and that could easily be stored until another room might open up to become a sewing/guest room). When I put the table right in front of the window, though, with its wings spread wide, I soon realized I wouldn’t want to take it down or move it to a side wall, where it would need to be if we were to put a bed in this space. 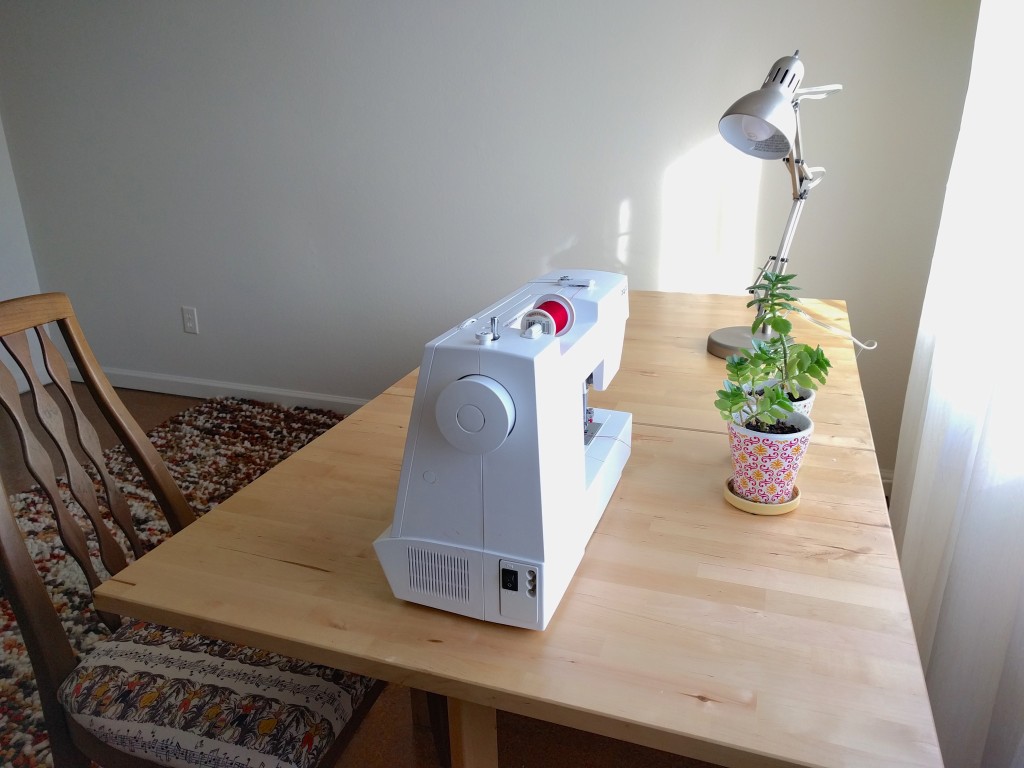 The reality of our new normal was sinking in about the time I put the table there, and it felt terrible. The empty spaces in my days filled up with hard truths that left me sad and angry and lonely. One of them is that the room isn’t going to be needed as a bedroom for a long time and that we have no clear pathway back to living together.  Another is that we rarely have guests, and that’s not just because we didn’t have a guest room. I admitted to myself that the existence of one wasn’t likely to change that, any more than keeping it an empty bedroom would heal Cane’s daughter or us. I felt I needed to ground myself in what I know to be real, and I didn’t want our home to feed any fantasies about our life together.

So, I let go of the bedroom and the guest room and embraced the creative studio. The idea that if we couldn’t have the family life we’d  hoped and worked for, at least I might have a comfortable, light-filled work space brought some small comfort. With the room cleared of everything but the sewing table, I decided it would be nice to also have a large work surface at standing height. (After making a standing desk at work this fall, I am now a big fan of standing desks.)

At Ikea with a friend, I found some trestle table legs that allow for adjustable height.

Those, I thought, could be used in any number of ways in the future. So, it would be OK to buy them. The Ikea table tops were a bit spendy, though. One of those seemed like too much of an investment for a table I might need to take down in a few months. I thought about a sheet of plywood, and then Cane had the idea of using a hollow-core door for the table top. It’s perfect. Large and light-weight and inexpensive. 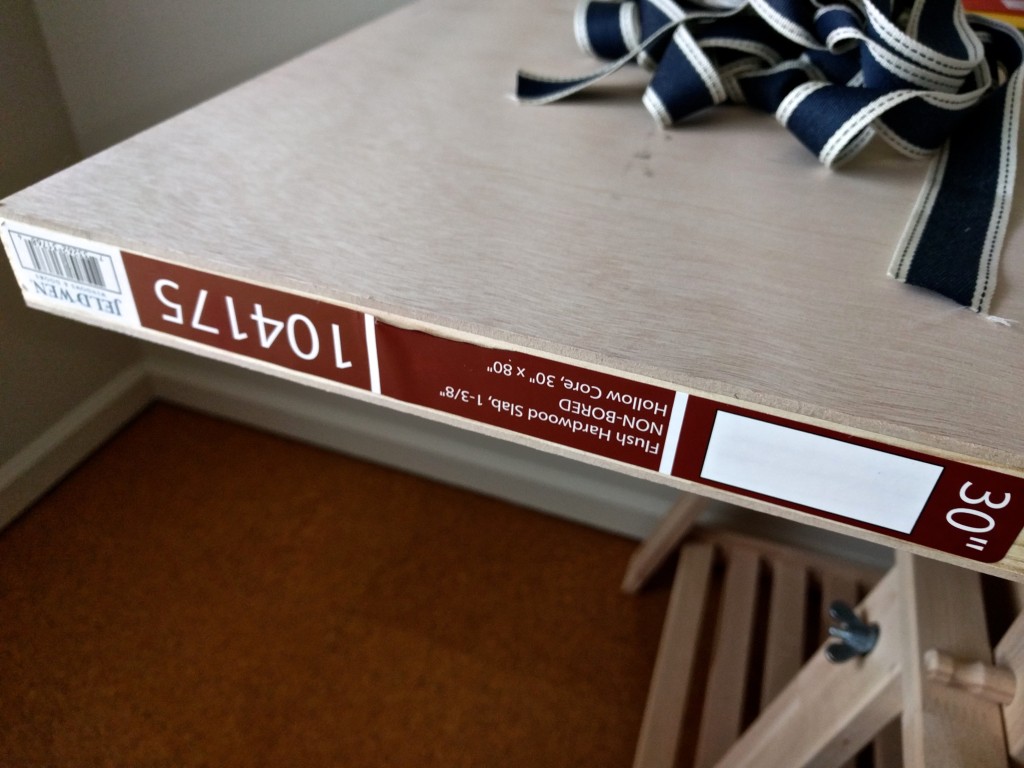 It will be much easier to cut out fabric on this table. In addition to storing my cutting mat, it’s also holding my scanner and a paper cutter and some other doo-dads. 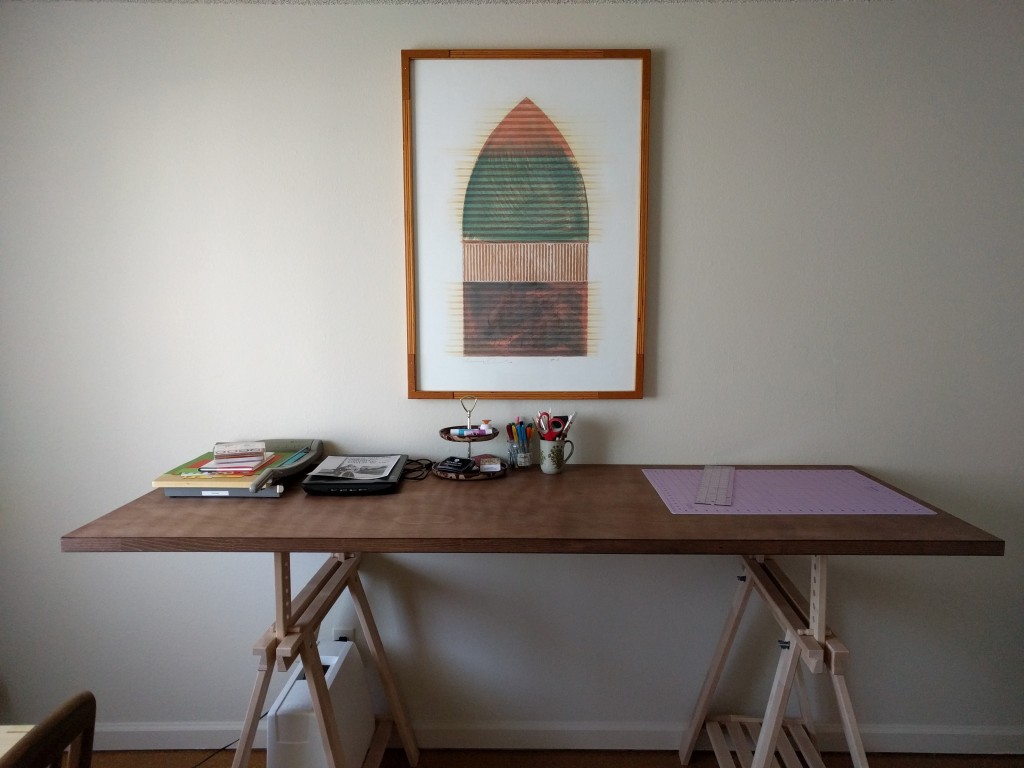 Stained the door, but left the legs just as they are.

For the first time in my life, I have a “room of one’s own” just for creative work. 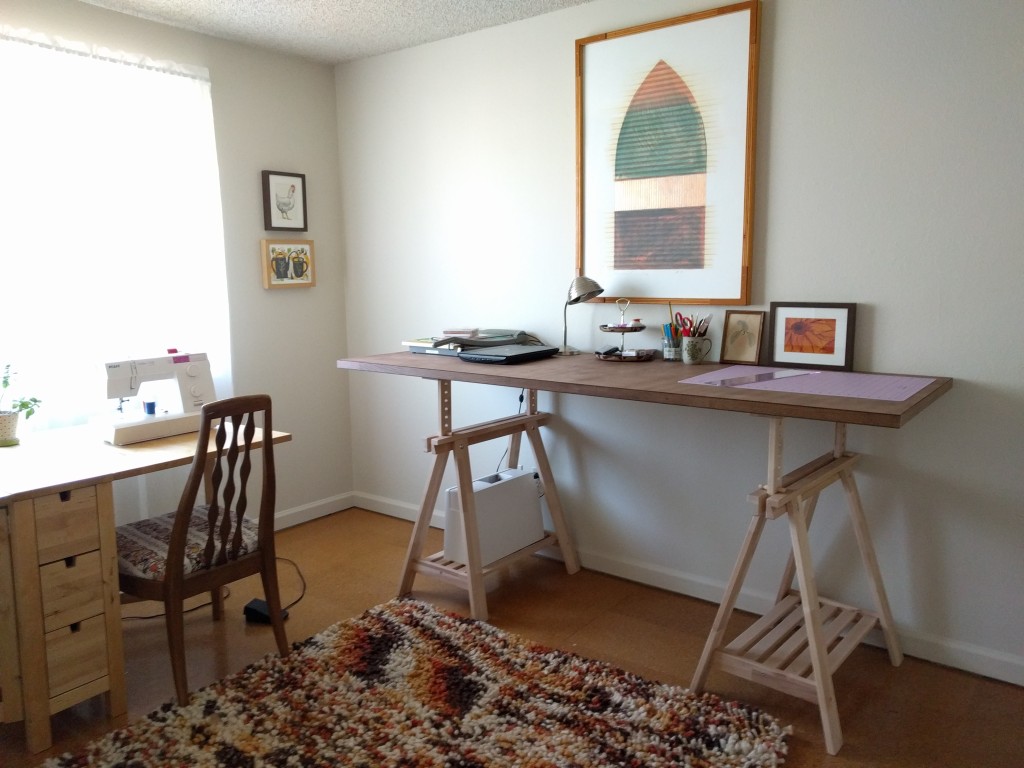 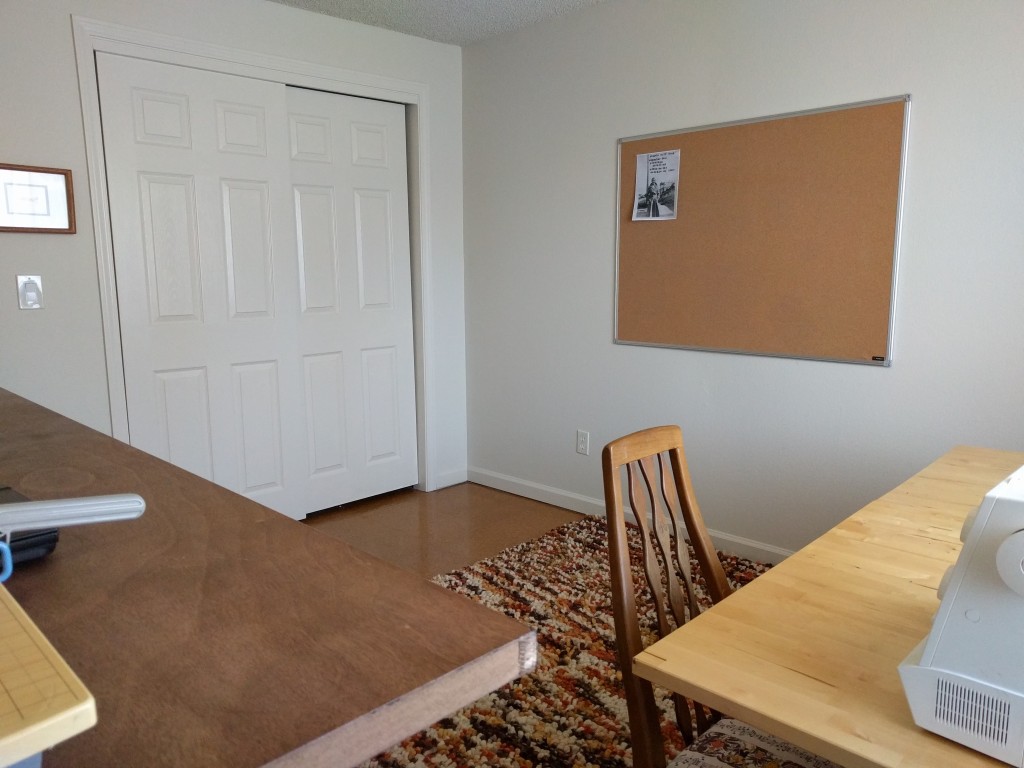 As you can see, it is rather spare. It is still a concrete representation of how things are.  Despite my efforts to create a space easily dismantled, it feels wrong, somehow, to create it at all, to invest anything in it, to do more to make it mine. It feels disloyal, or cruel, or as if I’m giving up on or turning away from a young person who needs support, the child of the person I love. I’ve wondered if I am. I’ve worried, working on this post,  that my intentions will be misinterpreted, that others might think my actions say that I don’t want her back in my home or that I’m glad she’s gone. 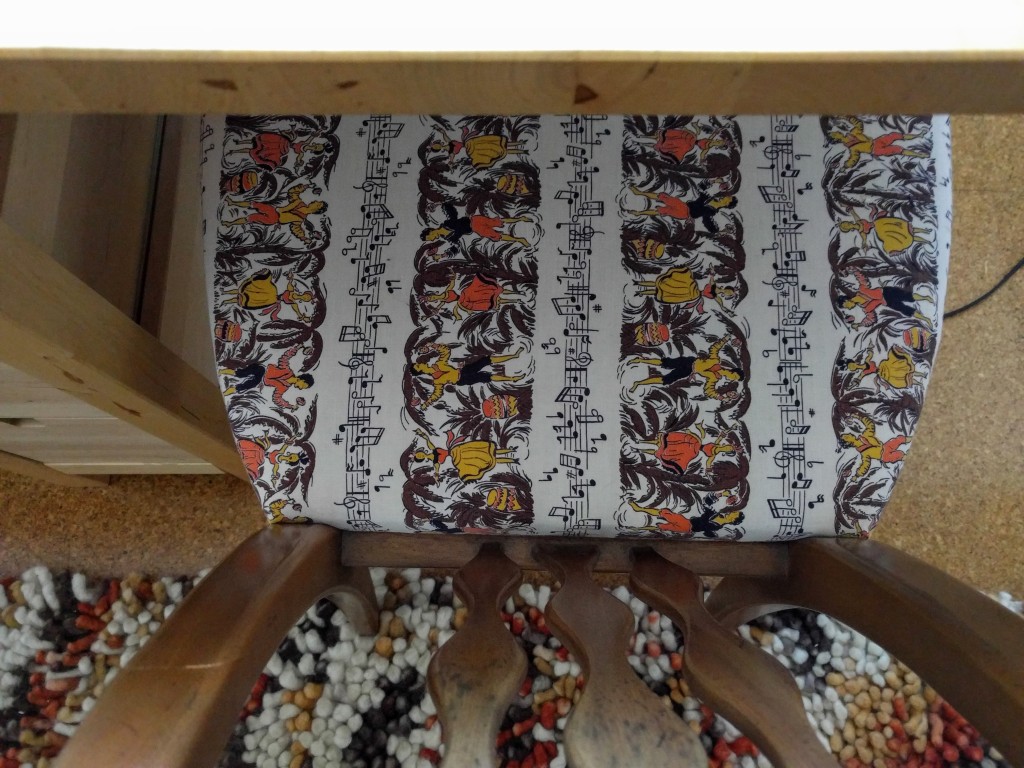 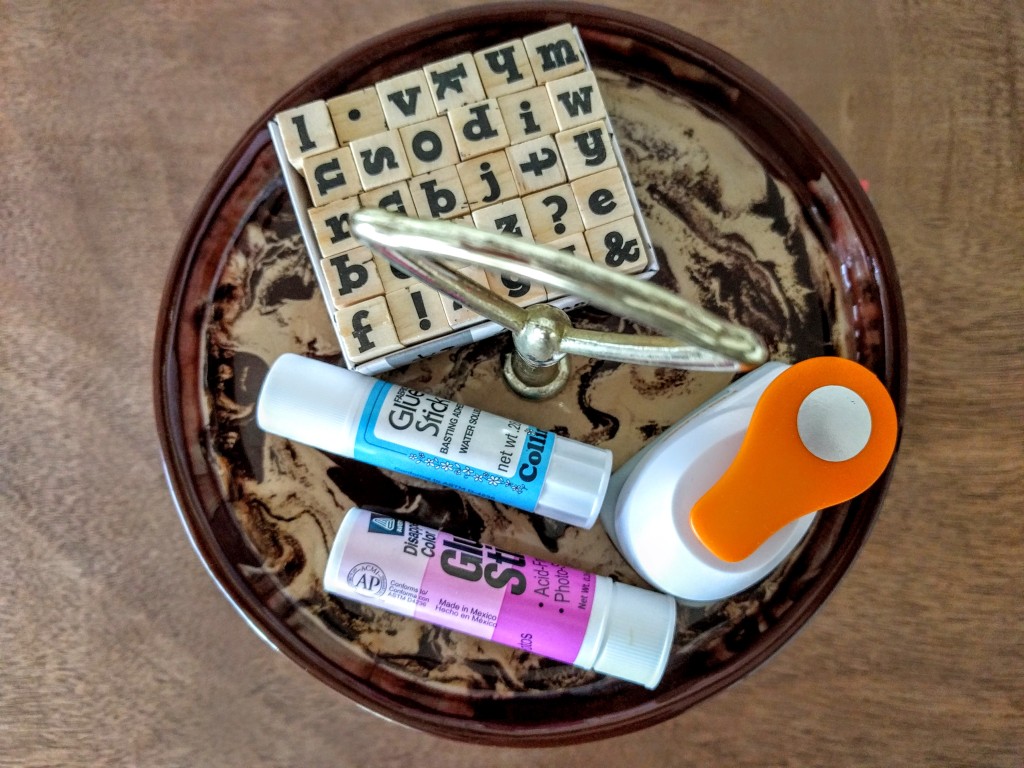 What does it mean if I make this space pleasing or celebrate it in any way?

However, I don’t want to pretend that I haven’t found pleasure in this space. I’m discovering how nice it is to be able to leave a project out half-finished and to be able to return to it without having to haul everything out and re-find my place in it. I’m discovering that having a dedicated room to create and work in is affecting my process and what I’m able to do. Those things feel good, and they help me tolerate all the things that don’t. As I putter with paper and thread and photos, I feel myself healing from a variety of wounds. I am not glad the room became empty, but I am glad to feel my strength returning. I know I need that in order to work toward being able to live again with Cane’s daughter, to create a new home in which all of us can feel safe and be healthy.

I’ve always hated the “when life gives you lemons, make lemonade” thing. Looking for the silver lining in any dark cloud is a good thing, sure, but I’ve always taken this aphorism to mean that we can turn whatever it is that’s bad into something all good. I thought it said we can (and, it goes without saying, should) just repurpose the sour fruit life’s given us into a treat devoid of any burden or disappointment–and that’s always seemed like a nice but false idea to me. 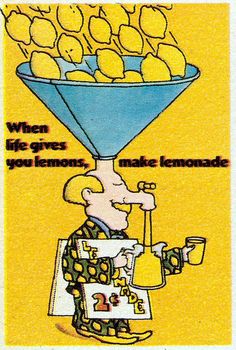 It’s just not this simple.

This room, though, is helping me see that it’s possible to take a more nuanced view. Lemonade, no matter how sweet, always has a little bite to it, doesn’t it? With a lot of work, we can reduce the lemon to its juices and temper its tartness with sugar, but we can never entirely remove its tongue-puckering qualities. So it is with this room.

Getting use from the room feels better than letting it sit empty. Being real about where we are and accepting what is feels better than living in denial or suspension, putting our lives on hold while we wait for things to get better or struggle (futilely) to make them something they can’t (right now) be. We’ve been holding our breath like that for nearly two years, and I need to exhale. Yes, I have found pleasure and joy and healing while working here, which is certainly sweet, but the tang of our losses keep those refreshments from ever sliding easily down my throat. 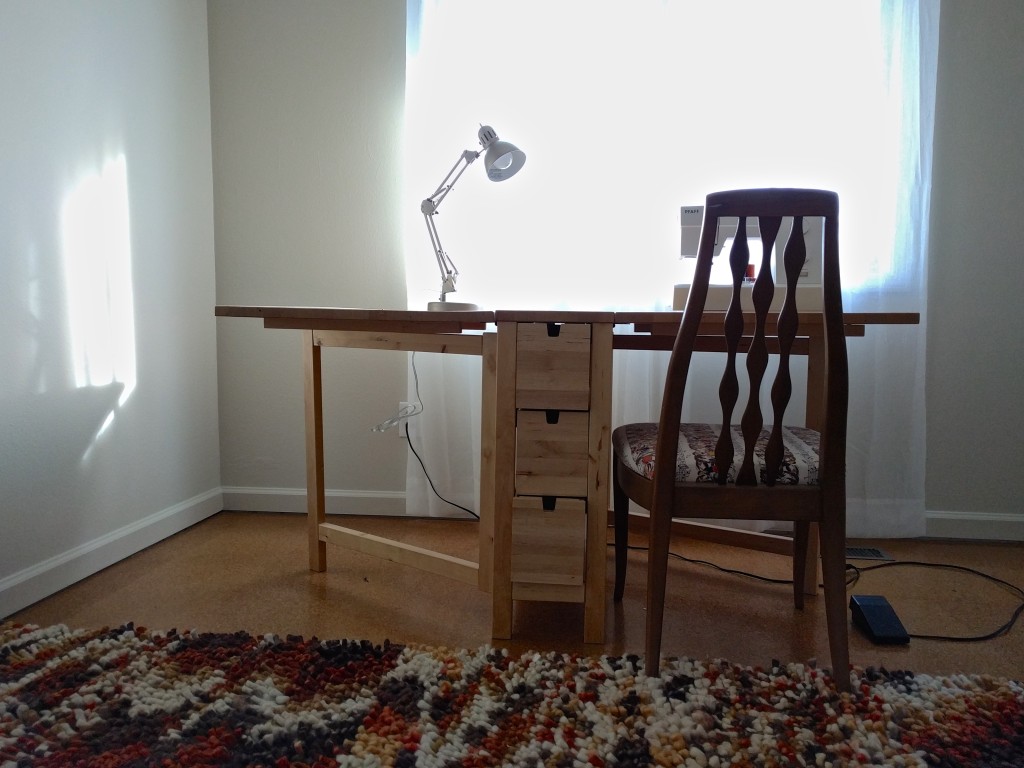 31 thoughts on “When life gives you lemons…”