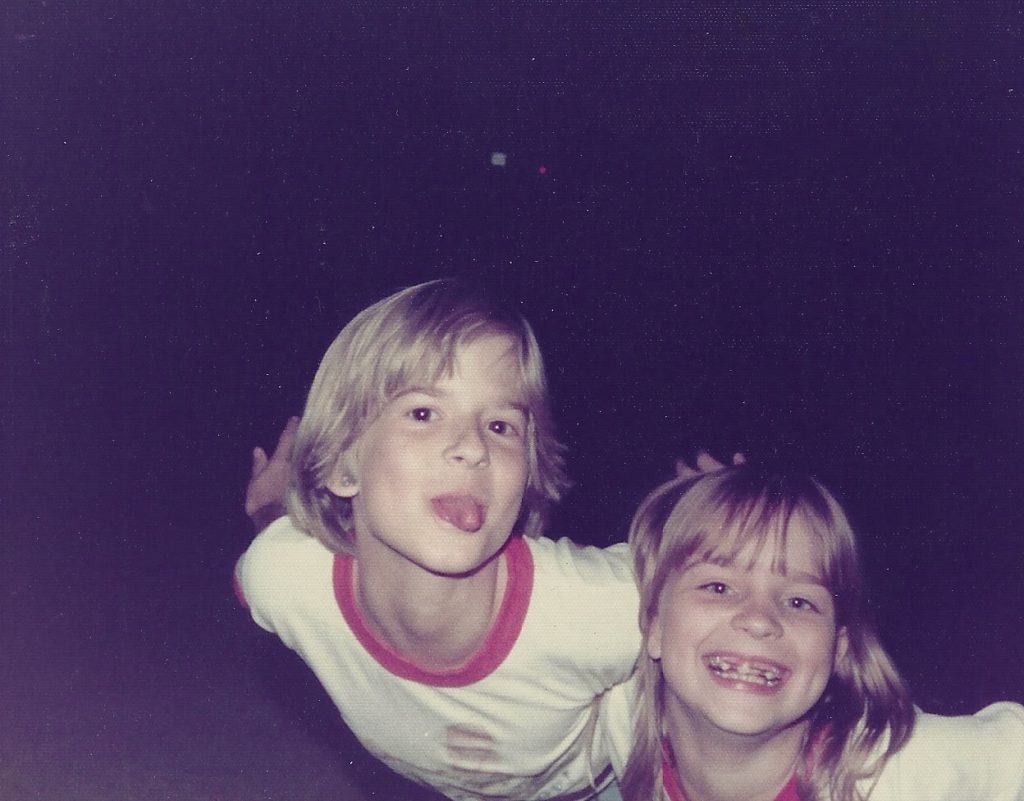 “I was going to learn how to have fun, dammit…. I … was going to become someone who not only could LOL, but would LOL. Because I was going to lighten the fuck up and find inner peace…”
–From the About page of this blog

I come from a family of women who laugh.

Ours was riddled with abuse, addiction, and abandonment, but I didn’t understand that when I was a girl. What I remember most was the adults around me laughing, over everything and nothing. I knew, in a vague, abstract way, that some hard things were happening, but none of it seemed as if it could be all that bad because no matter what was going on in other places, when we were together everyone was laughing.

It wasn’t until my grandfather died suddenly of a heart attack, when I was just 16, that anything about this struck me as wrong. His death came weeks after that of a great-uncle, leaving both my grandmother and her sister mid-life widows, and instead of that of my bedridden great-grandmother, who told the grieving daughters caring for her that God should have taken her instead. As they gathered in the kitchen to make meals and plan another funeral, they did cry, a little, but still they laughed.

“How can they sit around laughing?” I demanded of my father, furious–with fate, with God, with my laughing family.

“It’s how they cope,” he said. “If they weren’t laughing, they’d all be falling apart.” I didn’t understand. I was falling apart, and I knew laughter wasn’t going to hold me together.

As I grew older, I came to think of us as a family of women. There were a few boys–in fact, I arrived at the tail-end of a cluster of them:  my brother Joe, my cousins Michael and Tom, and I were all born within the span of a year. But these were my mother’s people, and the women were the ones who remained constant. Many of my cousins had fathers and step-fathers who just weren’t there. When I was young, I didn’t know where they’d gone. I thought that when people divorced, the dads just left, permanently. It wasn’t odd or bad to me; that’s just how it was.

That many of us had been born to hurriedly-wed teen-age mothers was also just a part of the family landscape. It wasn’t anything talked about, usually, but it also wasn’t something hidden. That, too, was just how it was. One night, after Tom’s  wedding, we all ended up at a bar where the band played “Why Must I Be a Teenager in Love?” and  “I Could Have Danced All Night,” which were met with peals of snort-laughter as the women of my family named each of those who should have danced all night when they were teenagers in love.

As I got older, I came to believe my difference had something to do with fathers and delaying childbirth and staying married. My mother’s father, my grandmother’s second husband, was one of the few who didn’t leave. So was my own. My mother was a teen when she married, but she’d graduated from high school, lived on her own for a bit, and wasn’t pregnant when she walked down the aisle of her church on the arm of her father, who handed her to mine. I believed that difference had given me a leg up in life, and wanting to give that to my children kept me in a damaging marriage far longer than I should have stayed.

My cousin Shannon, sister of Michael and the next-born after me, was the daughter of one of the hurriedly-wed mothers who later divorced. When we were kids, Shannon was bubbly and funny and cute and fun–the opposite of me in almost every way–but my natural ally against the boys. She balanced the gender equation of those of us relegated to the kids’ table by our common birth year, for which I was always grateful. She died recently, just a few months shy of her 50th birthday.

I wish I could tell you that her death was due to an accident or a random illness, but it was neither of those things. I wish I could tell you that after we both became adults we remained close, but that’s not what happened, either. The last time I saw her, I hadn’t seen her for years, and her appearance shocked me. She was only in her late 30s or early 40s, but she looked years older. I could see the features of the pretty girl in her lined face, and she still laughed easily, but I could also see on her body the years of pain she carried within it. I felt shy with her, wanting two contradictory things simultaneously:  To both hold her close and to hold her at arms’ length–not just because I no longer knew her and she felt foreign, but also because I wanted her to be foreign. I wanted her to be not-me. I wanted to believe that my life contained nothing of whatever had done what it had to her.

I don’t know the particulars of much of her story, but as I worked to absorb the news of her death amid a cacophony of stories about predatory men, it seemed to me that one of the most salient facts of her life might have been that she was born into a marriage that began when her mother was a young teen and her father–a violent, abusive alcoholic–was an adult. Sure, he was young and (I’m guessing) immature and not all that many years older than the girl who would become his wife, but he was old enough to be a soldier on liberty. She wasn’t old enough to drive.

As I worked to absorb the news of Shannon’s death, listening to the torrent of words coming from all the people explaining and excusing and castigating and talktalktalktalking  about the Harvey Weinsteins and Bill Clintons and Roy Moores of this world, sneaker waves of grief and rage rose within me, waves of feeling that were painful in large part because having them felt like some kind of weakness or ingratitude or claiming of that which isn’t really mine to own.

I mean, wasn’t I the lucky one? My father didn’t leave and my parents weren’t mentally ill and I didn’t live in poverty and no one beat my mother in front of me or fucked me when I was still a child–all experiences in the histories of others in my family.

Still, as I worked to absorb the news of Shannon’s death, I struggled through nights of insomnia and days of migraine (those twin companions more constant than any man I’ve known) while my brain hamster-wheeled with questions about whether or not my third marriage (which isn’t even really a marriage) is going to survive or whether it should and why I cannot seem to build a life that can sustain any kind of lasting physical and mental health and if I could keep it together until my next therapy appointment and why, whywhywhyfuckingwhy is it that, when I seem to have more than so many other people in the world, this life so often feels unbearably bleak?

Here is the thing I’ve come to realize in the wake of my cousin’s death and the torrent of stories about men who prey upon girls and women–the thing I didn’t understand when I felt the instinct to keep Shannon at a distance and through all the years I worked so hard to escape the kinds of fates I saw all around me (but in important ways didn’t):  Their acts are choking vines that grow and grip and curl around all the branches of a family tree, blocking sunlight, stealing nutrients, stunting growth, causing harm to the entire organism. When I look at those of us descended from my grandmother and her sister, every one of us in my generation has lived a life marked by broken relationships, broken health, or broken children. Often, all three.

There is not one thing funny about any of this, but I can see now that the laughter I grew up with didn’t stem from obliviousness to suffering or denial of it, but was instead a means of surviving it. Laughter was the way the women in my family turned their faces toward whatever light they could find shining through dense canopies of pain; it’s the way they pushed their children toward that light and pruned back the tendrils reaching for us. It’s what kept them from drowning our roots in tears.

I come from a family of women who laugh, women who did everything they could to nurture the tender twig of a girl that was me, a girl who mugged for the camera with her cousin in their matching t-shirts, both of them all full of bravado and sass and joy, two points of light in a field of darkness who knew–at least in that moment–that they were safe and loved.

18 thoughts on “There but for the grace of”