Christmas 2009, Cane and I didn’t have much money, so we agreed to make gifts for each other.

Because one our favorite things to do was cook a good meal at home, I decided to sew him an apron. I hadn’t sewn much since my early 20s, and I struggled more than a bit with the project. I’d chosen a lightweight denim for the apron (so it would be appropriately manly), and it took forever to turn the straps’ long tubes of thickish fabric right-side out. The night before the present needed to be done, I realized I needed a D-ring to join the neck straps, something I didn’t have because I didn’t carefully read the list of materials/directions until then.

So there I was, surrounded by fabric snakes and worn out from pulling together my second Christmas as a single mom with two 10-year-olds and limited money, time, and energy. When I realized that even if I stayed up very late to finish sewing/turning the last strap the apron still wouldn’t be finished because of the dang D-ring, I gave up. I wrapped up what I had along with a note promising to finish the apron as soon as possible. 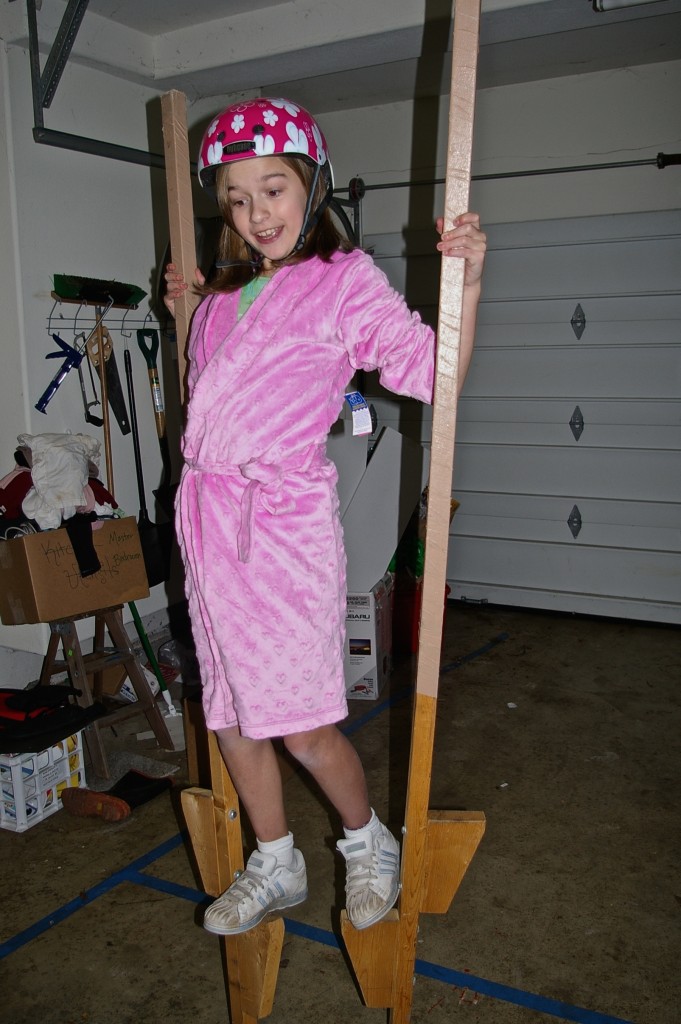 Struck out on the apron, but I scored major Mom-points by finding stilts that year.

Fast-forward to the summer of 2011:  As Cane and I packed up our belongings to move into a home together with our children, I found the still-unfinished apron project. When I showed it to Cane, he just laughed. Several times in the years since then I’ve rediscovered it while cleaning/organizing my fabric stash. Each time I felt badly about it but never kept it out to finish it. Later, I thought. When I have more time. Once, in the midst of a purge-all-the-things mood, I almost got rid of it. But I couldn’t bring myself to put it in the discard pile. A few years ago I admitted defeat by buying Cane a nice apron for his birthday, and we all laughed about the apron I never finished.

Here he is wearing the purchased apron just last week. Yes, those are wiener dogs all over it.

The holiday season this year was a trying time for us. Because of issues with Cane’s daughter, we spent the last part of Thanksgiving weekend setting up an apartment for Cane to live in during the times she is with him. Because she divides her time evenly between her parents, that means that Cane is now living elsewhere for half of our days.

Splitting up your household is hard at any time of the year, but it is especially hard during the holidays. December is also the month of my birthday, which brings with it all the kinds of thoughts/questions about life that one tends to have once one has passed the “fun” birthdays. Somewhere in the midst of that, I came across the unfinished apron again.

It punched me in the gut .

I remembered the early days of my relationship with Cane, how wildly hopeful and optimistic and in love we were, despite good evidence both of us had that such things were not enough to stave off heartache of all kinds. We were especially hopeful and optimistic about making a new family, together, with our children–a kind of family that neither of us had been able to create for them with our original partners.

Contemplating the apron parts I’d found buried in my fabric stash, I considered finally getting rid of them for good. Clearly, they were from a different time in our lives. Perhaps it was the kind of weight I should shed. Maybe holding on to them would be clinging to a part of our past I needed to release? Maybe finally discarding them would clear out psychic and emotional space that could be filled with new and better things?

I couldn’t do it, though. It felt like getting rid of the apron would be abandoning our hopes and dreams–that it would be abandoning those sweet, naive, tender-in-spite-of-experiences-that-should-have-hardened-us people we once were–and I couldn’t do it. I decided that, instead, it would be better to finally finish the apron and give it to Cane on Christmas morning, a symbol not of our failures but of our hope that things will eventually get better.

Because of our new living arrangements, I finally did have time on my hands to finish the apron. I underestimated, though, how much his absence would alter the fabric of our lives, and how that loss would leave me feeling so listless (when I wasn’t angry or sad) that I couldn’t settle down and focus on much of anything.

Come Christmas Eve, the apron was closer to being done but still not finished. I wrapped it up again with a D-ring this time and a note promising to finish it before the end of our winter break. My daughter groaned when he opened it, but Cane just laughed.

I told him I’d wanted to do something creative with the pocket, but wasn’t sure what he’d like. Together we came up with the idea of using pockets from a pair of Levi’s on the apron, and we had fun one afternoon choosing a pair at a thrift store. I got the side straps attached (although badly, as I’ve lost the pattern directions) and removed the Levi pockets from the jeans and was sure I’d finish before my new deadline. But then there was a blow-out at the end of break (a regular part of the cocktail that is blended family life with a twist of mental illness), and I didn’t finish the apron before our break ended. There was still no neck strap. 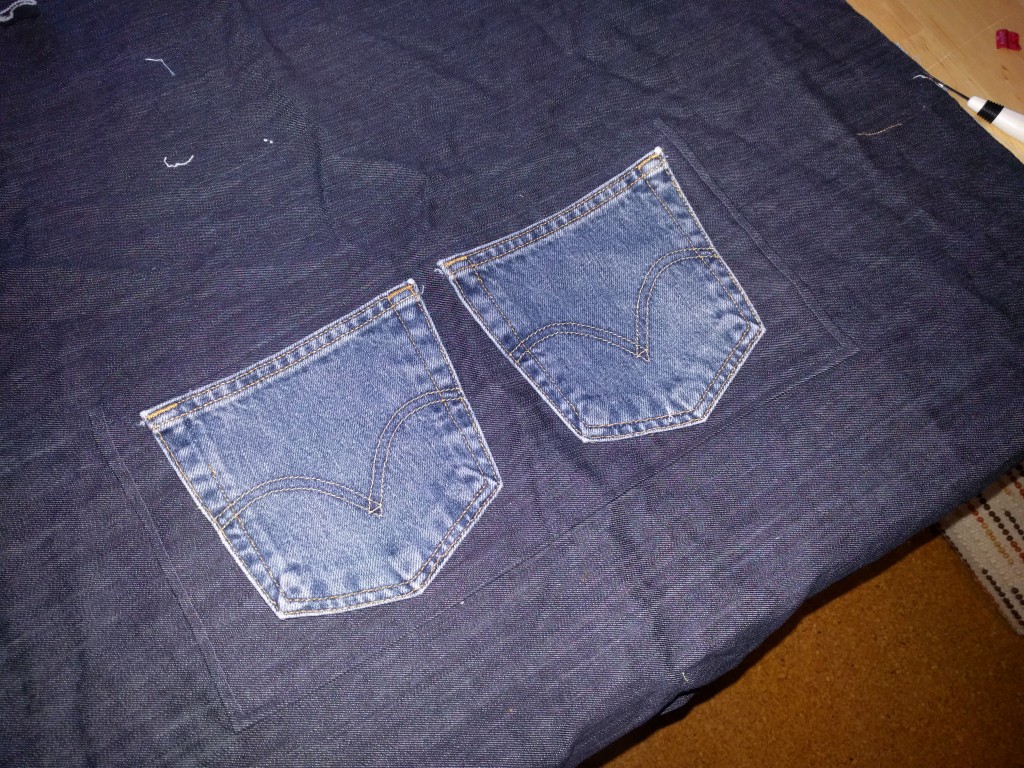 One design iteration we considered. Decided it just looked weird.

The idea of finally saying F&¢K it! to the whole thing–apron, home, life together–seemed like it might be a reasonable response. Maybe a healthy one. Maybe I just never had what it takes to pull any of this off, I thought. Maybe I should let go of the apron and all it represented. I set it aside and went back to school.

But then one of the nights Cane was gone, I started playing around with the pockets. I put one on the apron.

Another night, when he was home, I told him I’d given up on the neck strap with D-rings. Said the apron was his and I didn’t care about it fitting anyone else, so I didn’t need to make it adjustable. I measured the length of neck strap I needed for the apron to fit him, and I pinned it in place. No D-ring!

This past weekend, while he was away again, I removed the straps I’d sewn on badly over break. When I first realized I’d messed that up, I thought I’d just leave it. I thought it mattered more to just get the thing done than to have to tear it apart and re-attach them. Doing that meant ripping out the entire seam along each side of the apron. But I did it anyway and figured out my own way to attach the straps correctly.

When I had time to re-sew, I only had red thread at my disposal. I decided to go with it, and then I kinda liked it, so I made it look like I’d done it on purpose and sewed a second seam mostly for looks.

Then I decided that one jean pocket (which we’d finally decided upon) didn’t look quite right all by itself. I thought the apron needed more faded denim for visual balance. That meant more tearing to remove the original apron pocket I’d sewn on back in 2009, so I could replace it with one made from the thrift store jeans. I spent a good part of Friday night and much of Saturday morning finally finishing the apron. 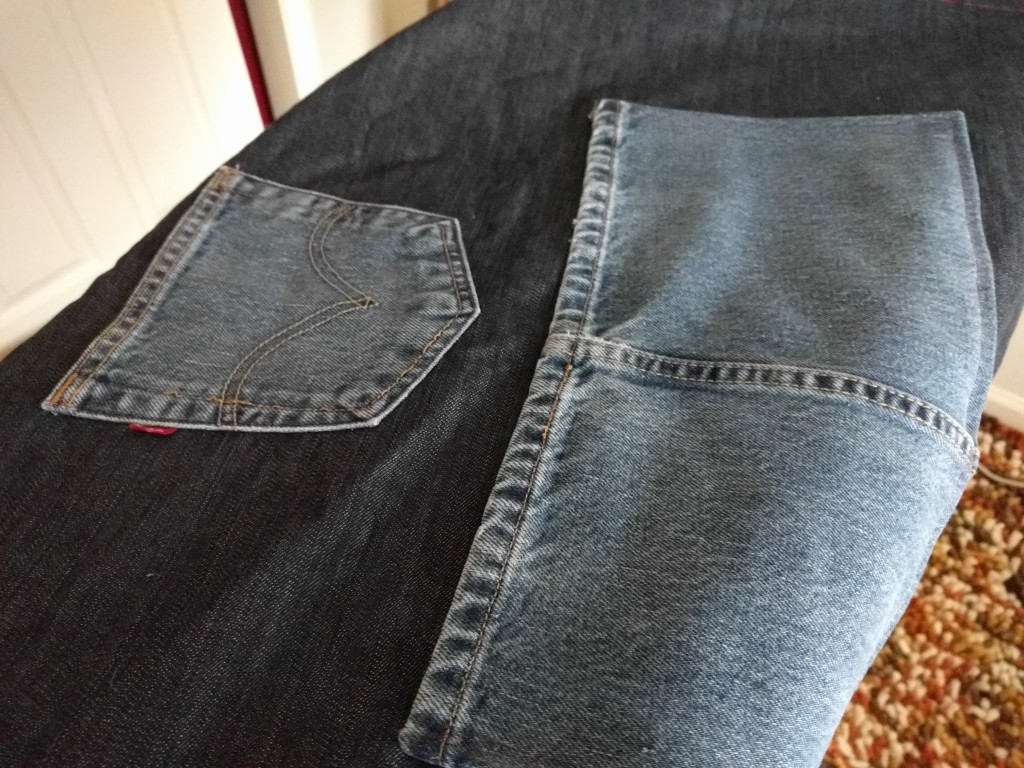 I’m not over the moon about this project’s design. To be honest, I think it’s kinda goofy-looking in a cheesy 70’s way. But we’re children of the 70s, so what-the-hay. On Sunday Cane came back home, and we did what we like to do best this time of year. We lit candles and turned on some music and cooked a nice meal together. Cane wore his finally-finished apron, and all felt right in our world. (Or at least, all felt OK enough to feel good.) 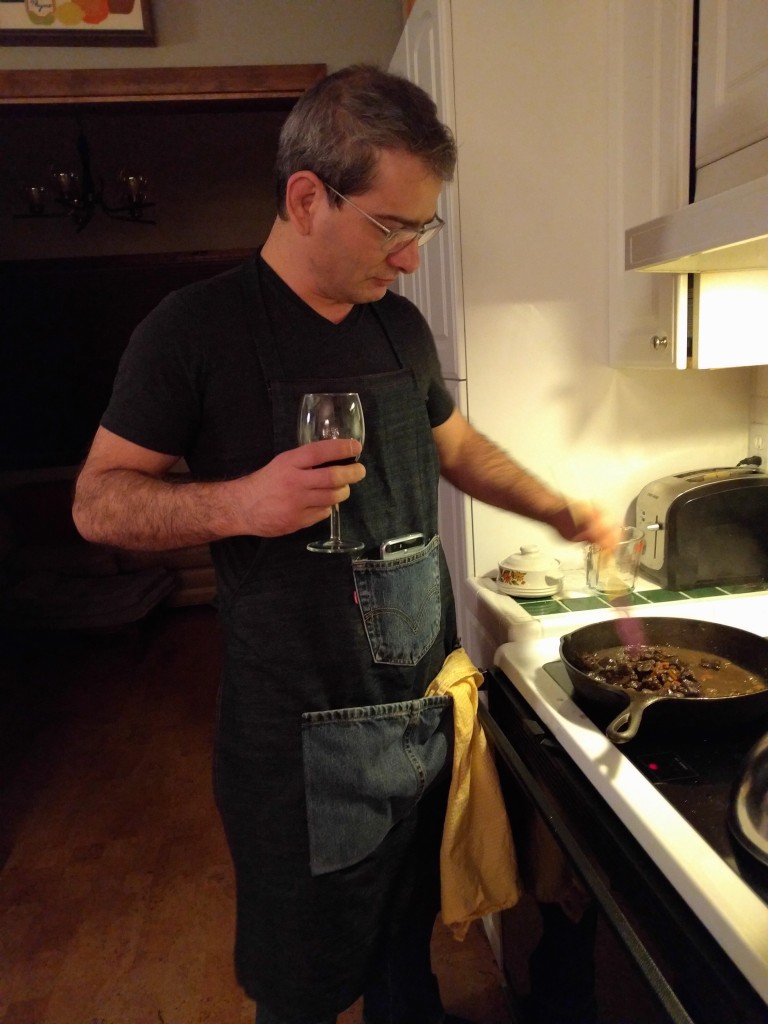 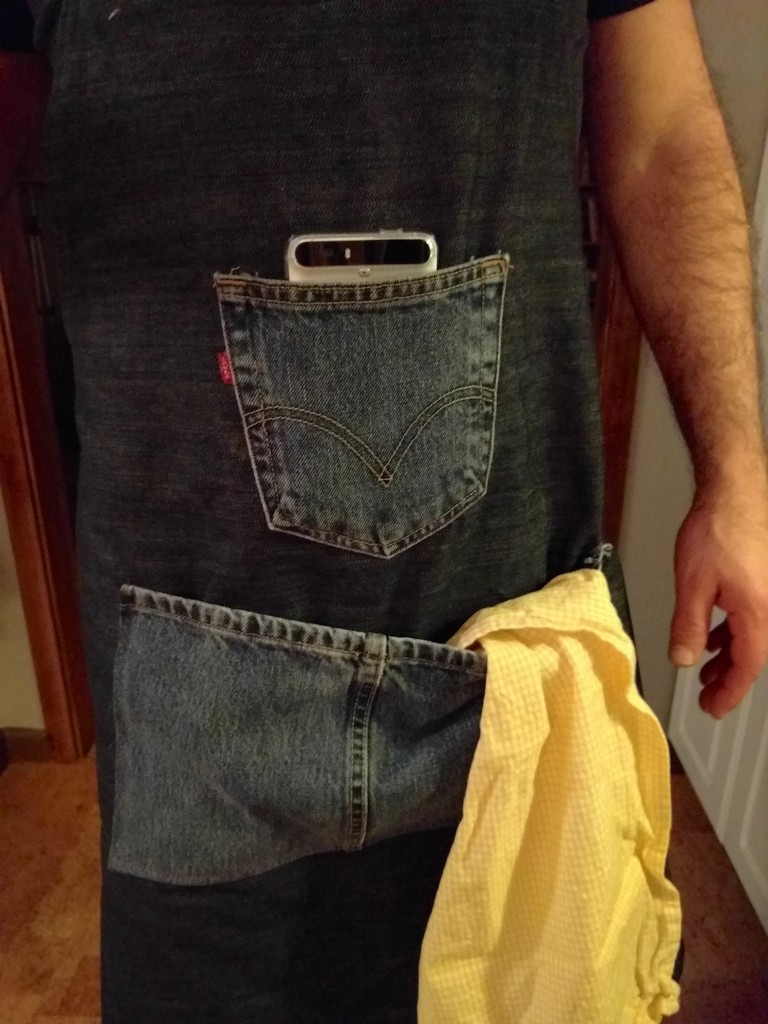 He wanted that top pocket just for his cell phone. He’s a modern old dude.

So often we invoke the words “better late than never” to mean that it’s better to get something late than not to get it at all. These days, I’m thinking about just the first two words:  better late.

If I’d finished that apron in the first days of 2010, as originally planned, it wouldn’t look the way it looks today. It would have looked nice in a pretty safe, plain way, but it wouldn’t have our personal style stamp on it. If I ‘d finished it in 2010, the apron would have a meaning, but not the one it has now. Watching Cane wear it while stirring pasta sauce and sipping a glass of wine, I hoped that this apron has become something that truly does embody our dreams and how we work toward realizing them. I hoped that years from now it will still be hanging on a hook in our home, something we’ll never be able to bear discarding, and that it might be the first of many other things in our life that will be better late, too. 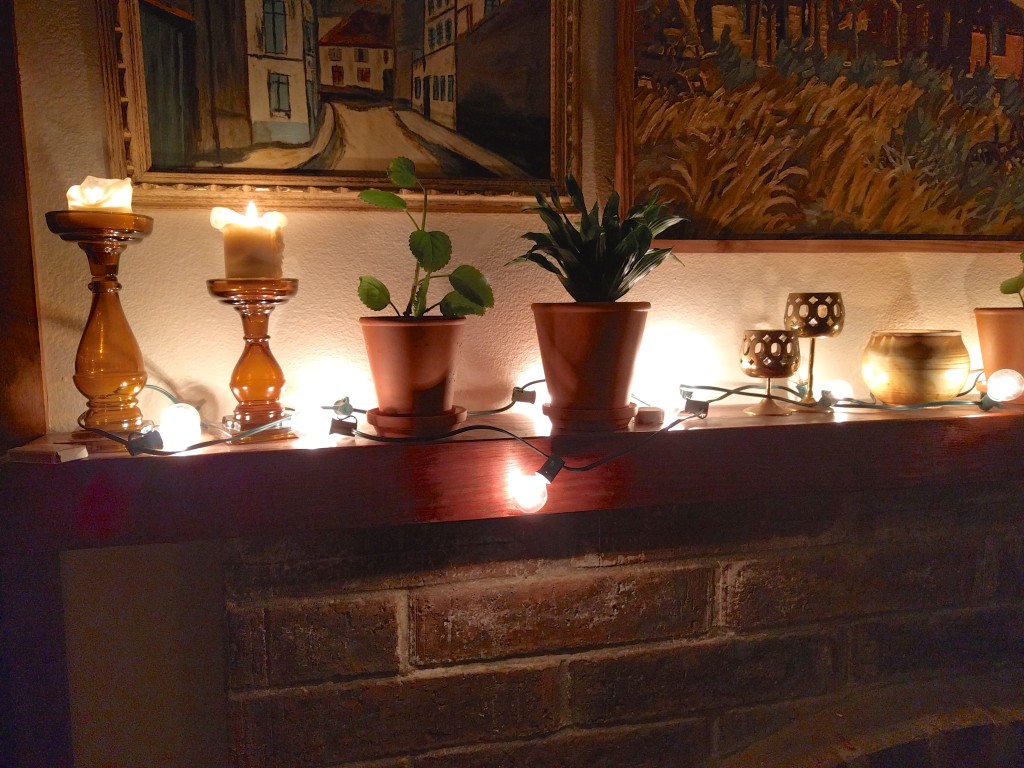