When I tell my therapist that I can’t talk about my daughter’s impending departure for college without crying, she says, “Of course. You’re grieving.”

“Grief” feels like too strong a word. I mean, c’mon. She’s not dying.

But last week, as the time left for her to live with us changed from the unit of month to week, I have found that I often can’t even think about it now without crying. Yesterday as we made breakfast, I had the thought that Cane should make his beignets, her favorite, before she goes, and I was so flooded with memories my body literally couldn’t contain them.

Time has taken on an almost tangible, viscous quality. I have no work-based entries to make into this creative notebook because, I am learning, creativity requires a kind of mental fluidity that’s beyond me right now. I feel suspended in some kind of thick, gelatinous reality that is not reality. Although time is moving, I am not, and it feels I won’t be able to until what’s going to come next is finally here.

It’s true:  No one’s dying. But something is–the life I’ve been living for more than 18 years. It might seem as if that statement’s not true; in that 18 years I’ve changed jobs and homes and life partners. Through all of that, though, my kids were the constant, the one thing I knew I’d never leave, the only thing I’ve ever remained wholly true to.

I don’t know how many times I’ve heard people say that when you have kids, your life stops being all about you. It becomes about them. You’re no longer the most important person in it.

It’s still all about you:  When you have kids, they have to go where you take them and do what you tell them to do.  They are woven into the fabric of your every day. They become your people, and you are theirs, and you are a family, a unit in the world.

Truth is, I didn’t feel my life really started until they came into it. Now, that life–with both of my children–that’s ending, and it’s happening less than a year after the end of the family life Cane and I tried to create.

So, yeah:  I guess I’m grieving. And it’s kicking the stuffing out of my creative productivity.

Back in the spring, I finally “finished” the house project I’d been documenting here: 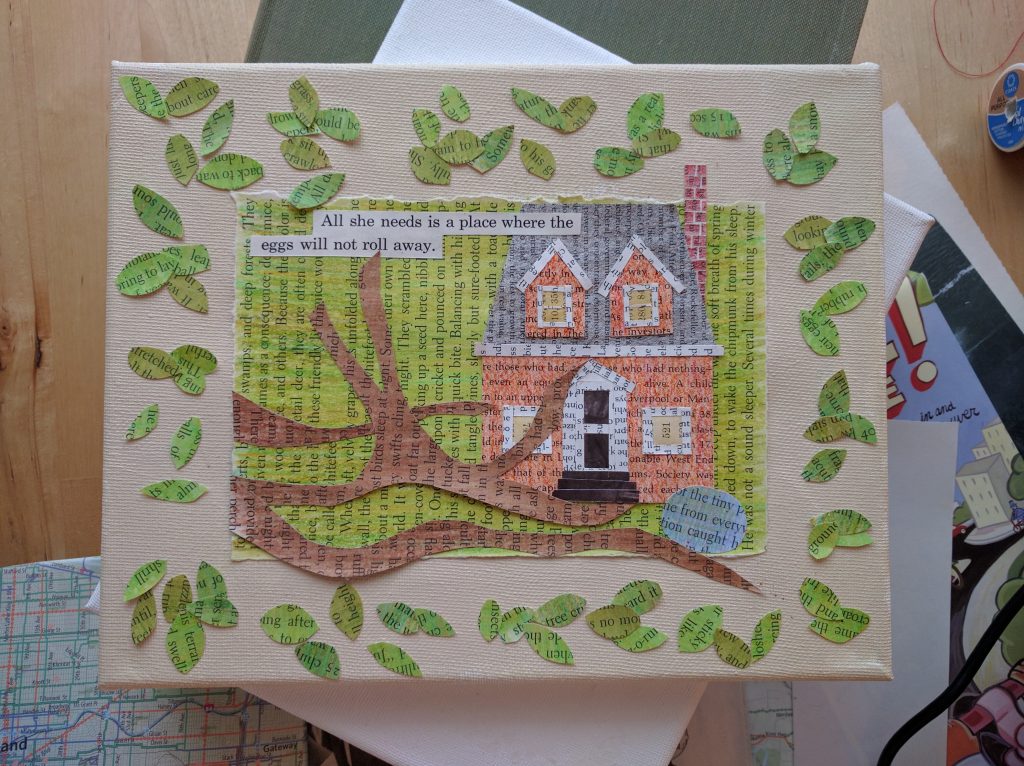 This isn’t the final product, but it’s close enough. I did finish it by covering it with a glaze.

I’m not pleased with the final result. It’s too cute; I was trying to express something more serious than this image conveys. The book pages I used to make the house came from a chapter of a history text on the Industrial Revolution. It talked about the terrible housing conditions for the working poor in many cities, and how difficult it was for mothers, especially, to care for their children. The text for the tree came from a children’s book about animal habitats. When I started it, I had recently read a YA novel, The Hired Girl, in which the protagonist runs away from her abusive father and works as a maid for a wealthy family in the city. I wanted to create a piece that would provoke thought about need vs. want, resources, social class, and how we nurture our young (and don’t). The leaves around the edge make this too cutesy/cheery, and I don’t like them.

There are also some issues with my (lack of) skill. Part of the reason it looks too cute is that I don’t have the skill to execute the vision I had in my head.

As a learning piece, though, it’s fine. I learned some things doing this one that will serve me in the next. I’m ready to let it go and move on. Working on this piece, while simultaneously thinking lots of personal thoughts about housing, home, resources, needs, and privilege, has me interested in small (not tiny) houses, particularly those in what were once working-class neighborhoods. Portland (OR) is in the midst of a housing crisis. A deep history of racist housing policies and current gentrification are driving many out of Portland. (If you’re interested, this article recently published in The Atlantic is an important read.)

Although I’ve tried a few times to go into my studio and begin some new work, I haven’t gotten anywhere in there. The most I’ve been able to do is go on walks and take some pictures.  I’m posting them here so I have easy access to them: 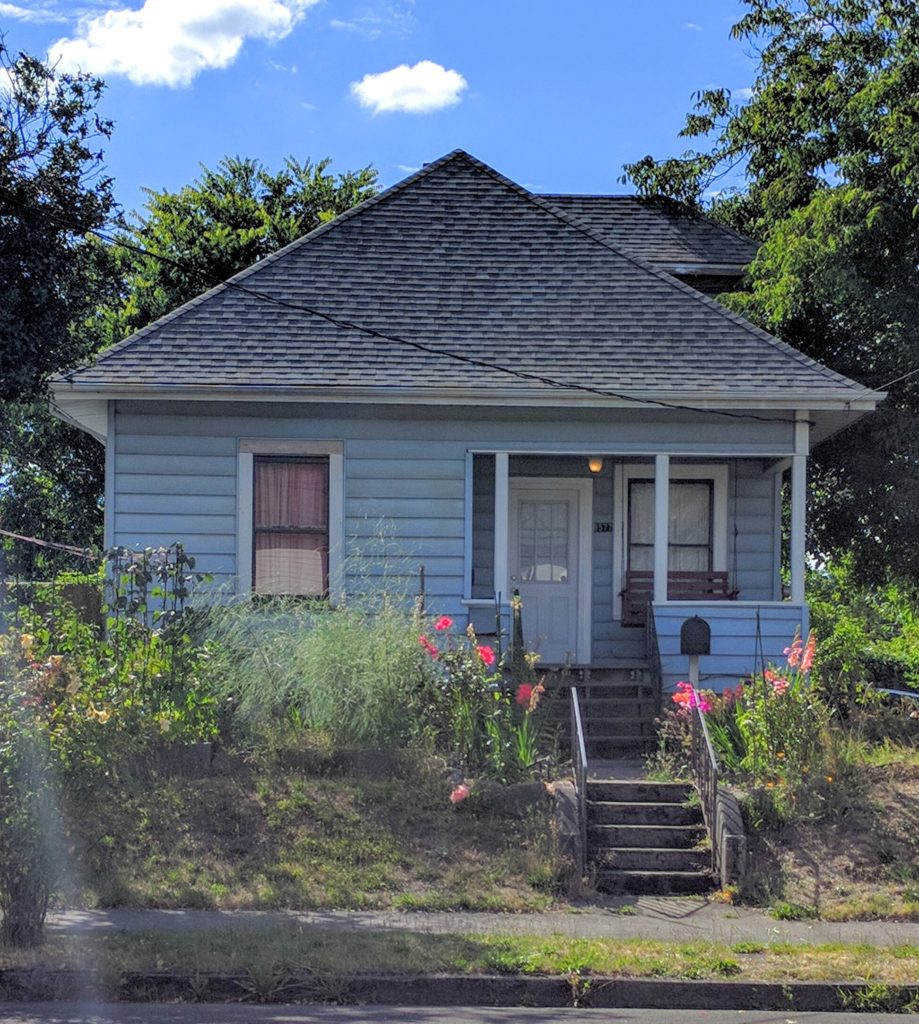 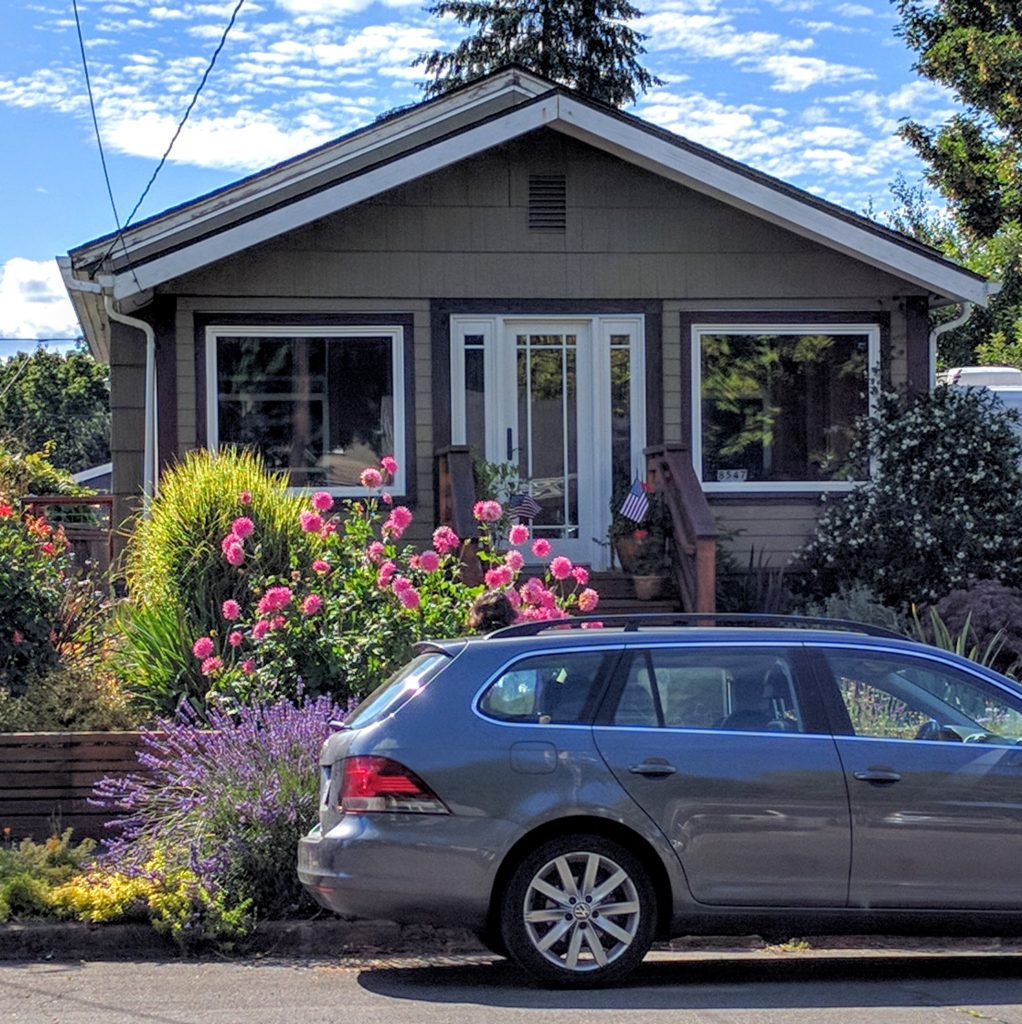 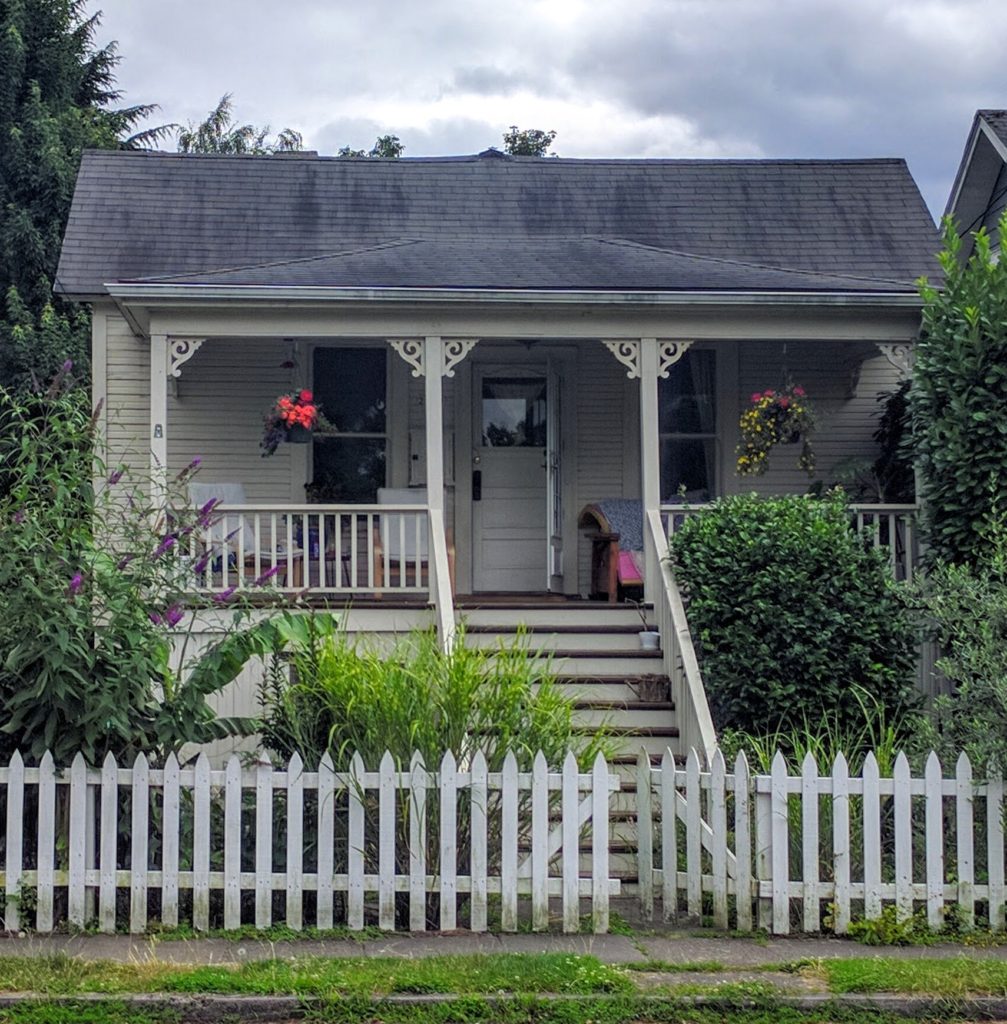 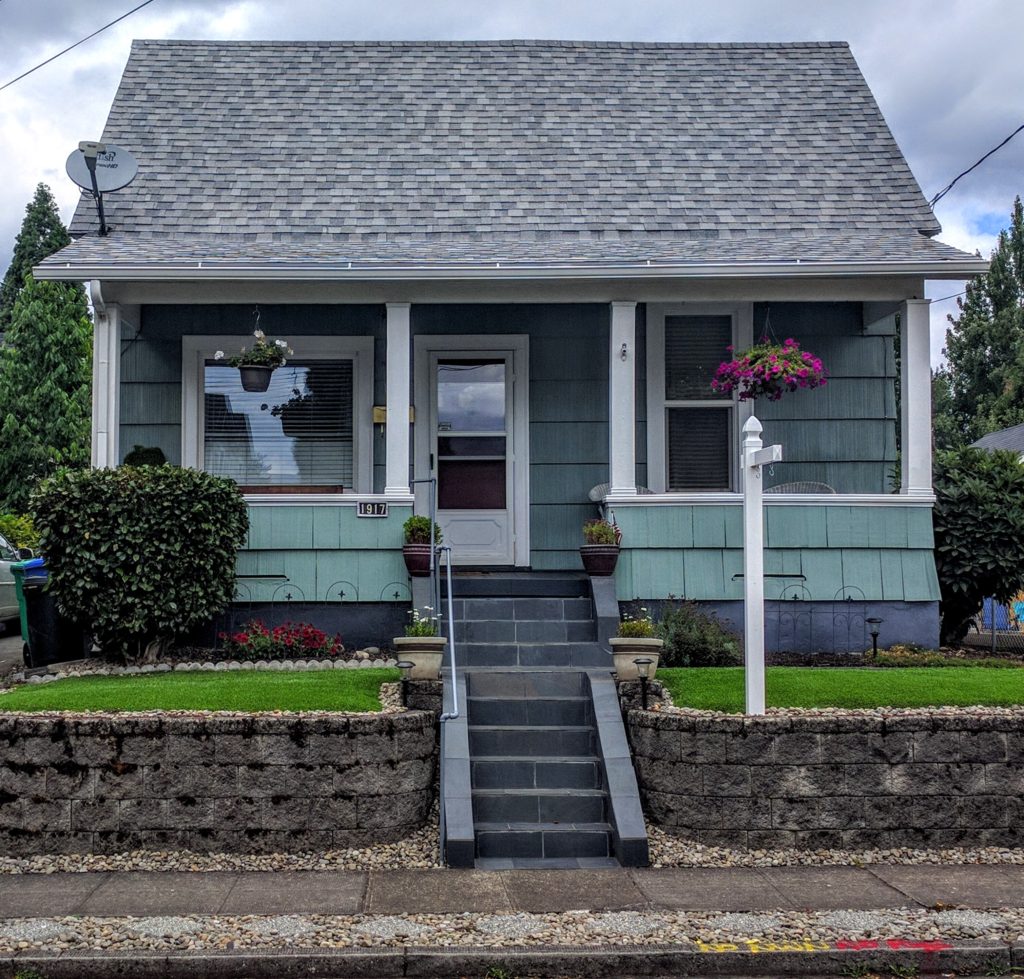 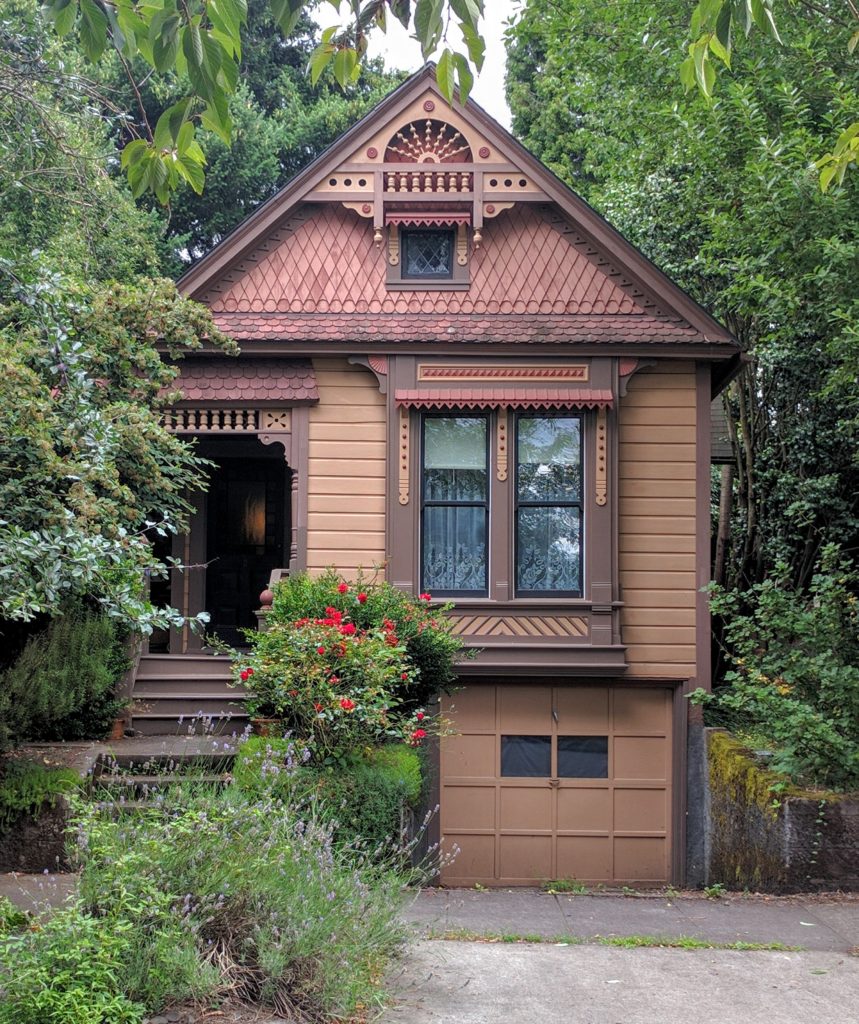 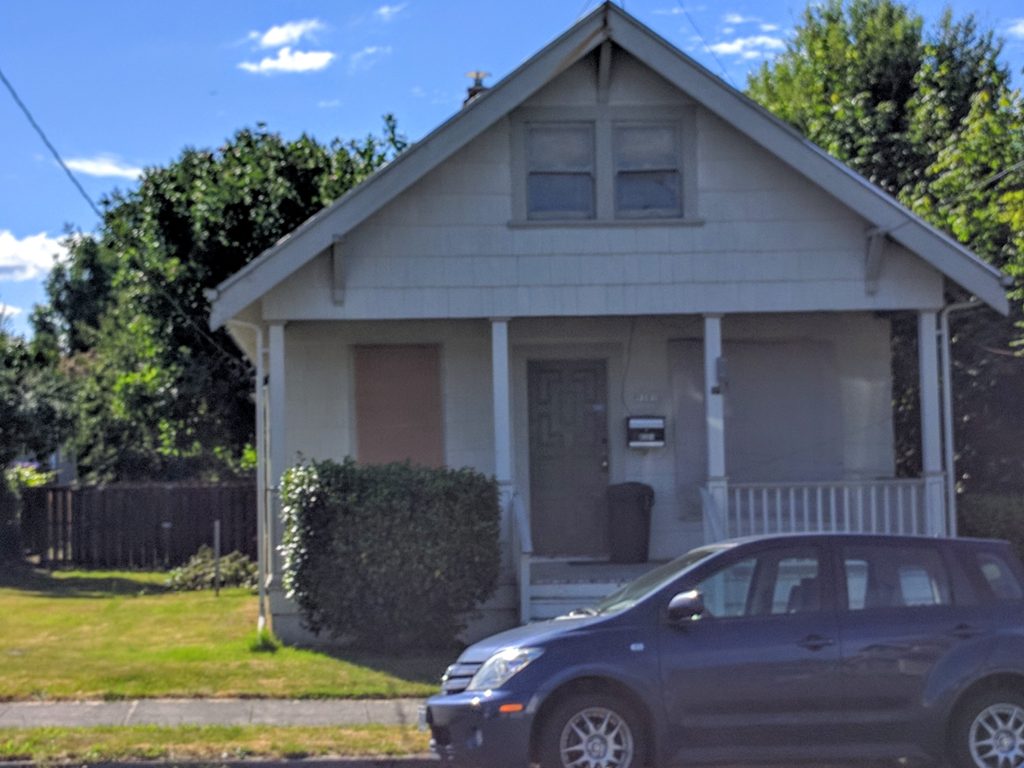 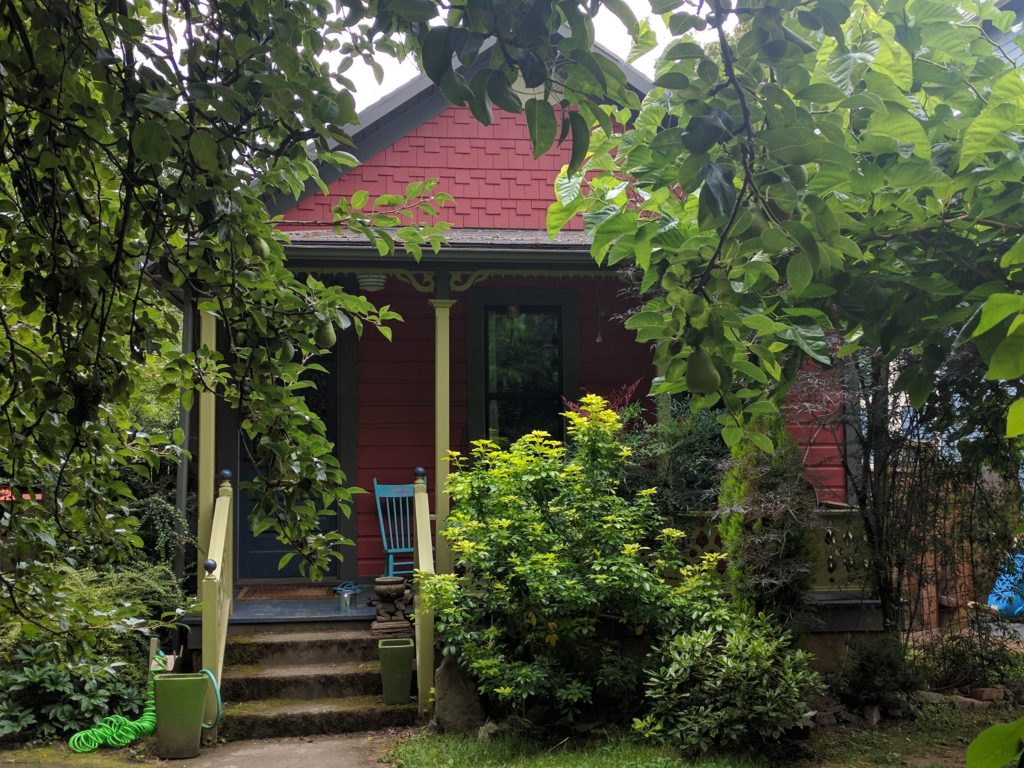 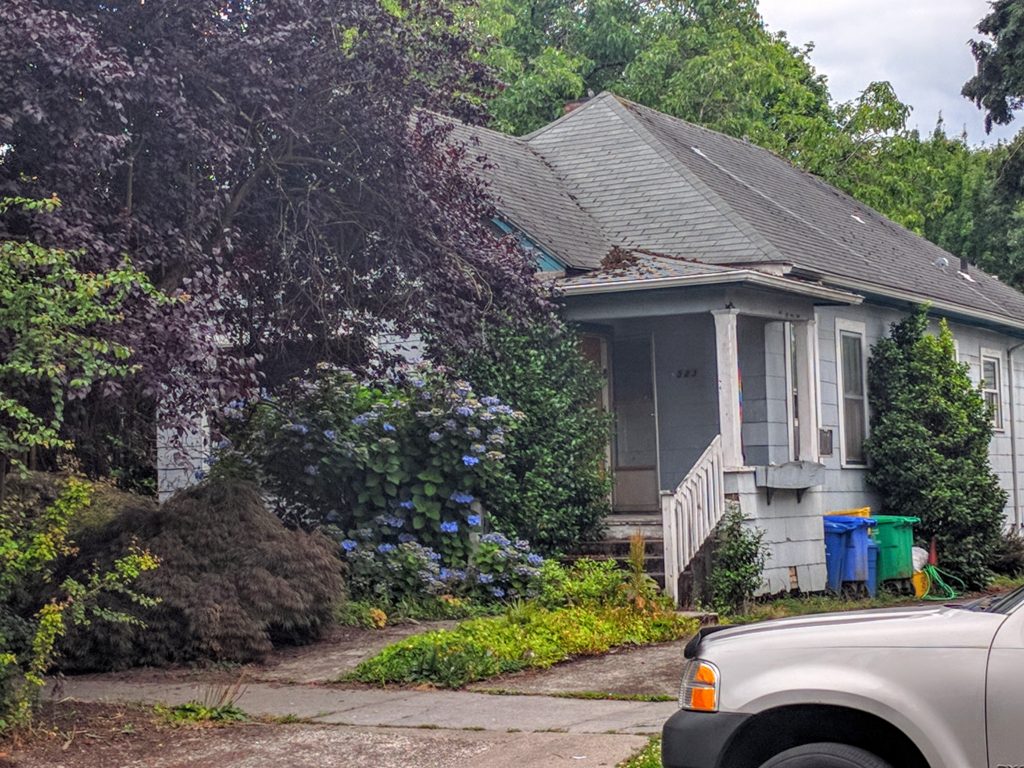 Great photography wasn’t my goal. I just snapped these with my phone. I’m not even sure where I’m going with this. These are just interesting to me, and even though I don’t seem to be in a place to do anything much with them right now, I know that will change.

I’ve been doing creative work long enough now to know this is just the way of it. Sometimes, other things in our life use up our creative energy. Sometimes, those very things are the source material for future work. This might seem like a disjointed post–about grief and kids leaving home and…working class houses and gentrification and displacement?–but I know it’s all connected. Just as I know there will be future work.

It always comes back. There are so few enduring constants in any life, but this is one of them in mine. 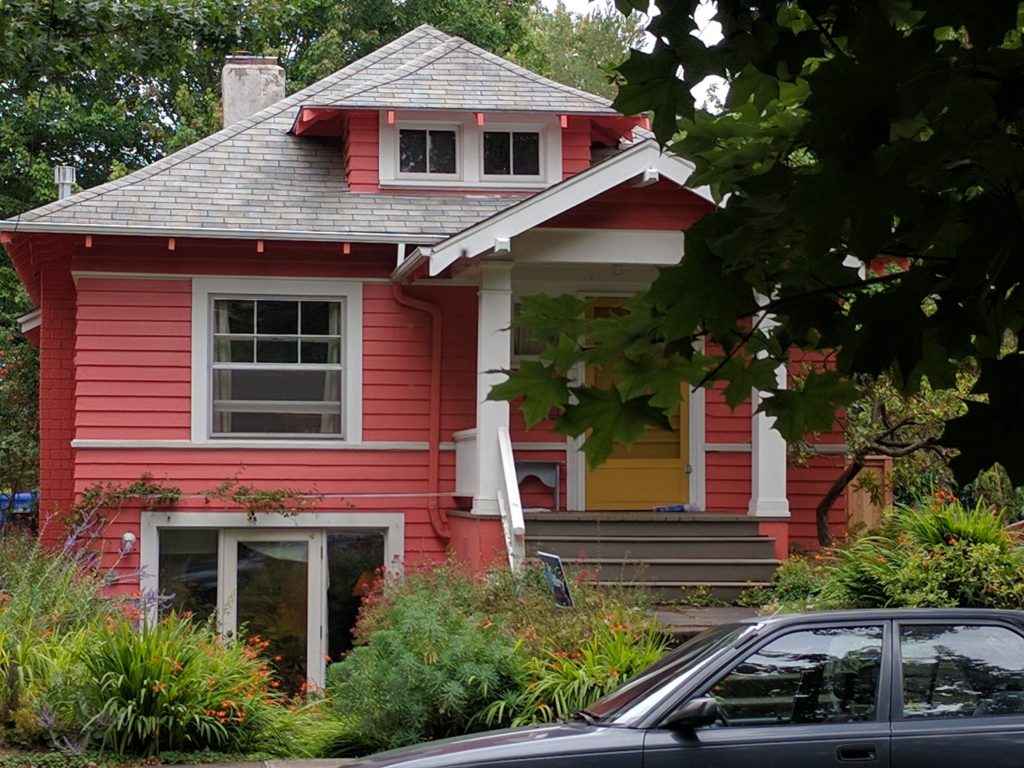 11 thoughts on “Grief and creativity”