In the opening pages of To Kill a Mockingbird (one of my favorite books), narrator Scout spends a few pages exploring the question of when her story truly starts, concluding that perhaps it goes all the way back to the arrival of her ancestors in Maycomb county. Consider this fair warning:  This post might be a little bit like the first few pages of that book (wandering and hard-to-follow and leaving you wondering what the point of all those words was).

It might seem as if the start of today’s story was a day this past spring when I was making dinner and heard a loud thunk from the room adjoining the kitchen and our two wiener dogs came barreling into the kitchen in a barking flurry, but I don’t think that’s the true start.

I think it really began in the first days we owned this home, when we removed baseboard trim in our dining area to install new cork floors, and we discovered this evidence of previous home “improvement.” 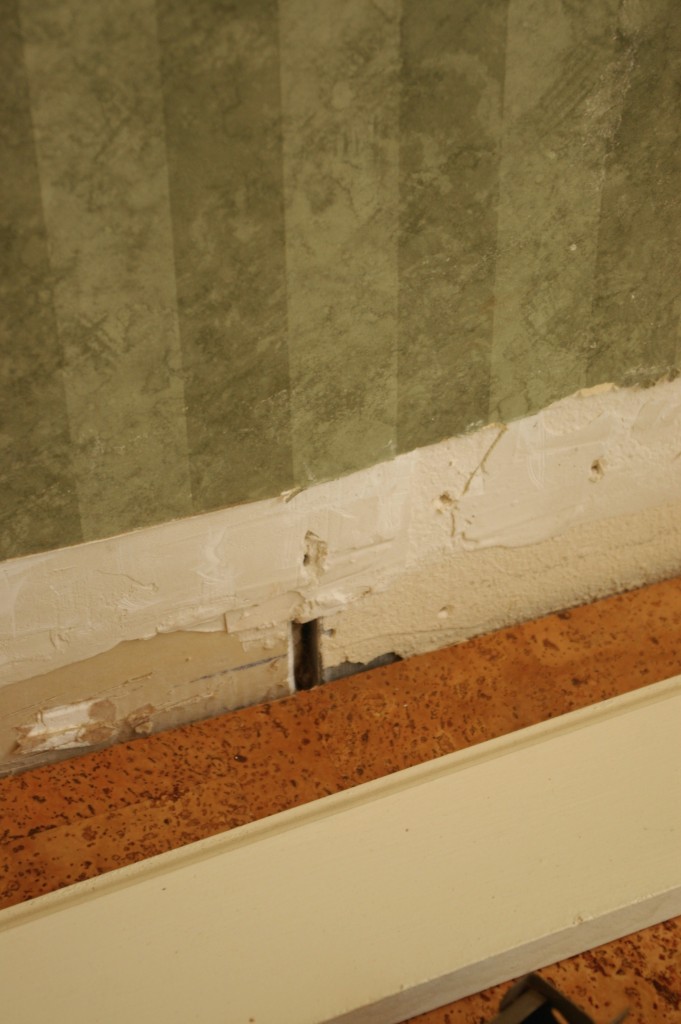 It was clear to us that the opening between our dining room and kitchen was once larger, and the wall to the left of this seam wasn’t original to the house.

Another thing not original to the house was every one of the six wallpapers we hated that came with it. I started to tear at the paper that first day, but Cane stopped me.

“Uh, this wall looks all kind of janky,” he said. “I don’t think we want to rip that paper off. It’s probably hiding a bad wall fix that we’ll need to really fix, which will be a big job. Best leave it alone.”

And so we ignored it, because there was all kinds of other janky going on in this house that was of higher priority. 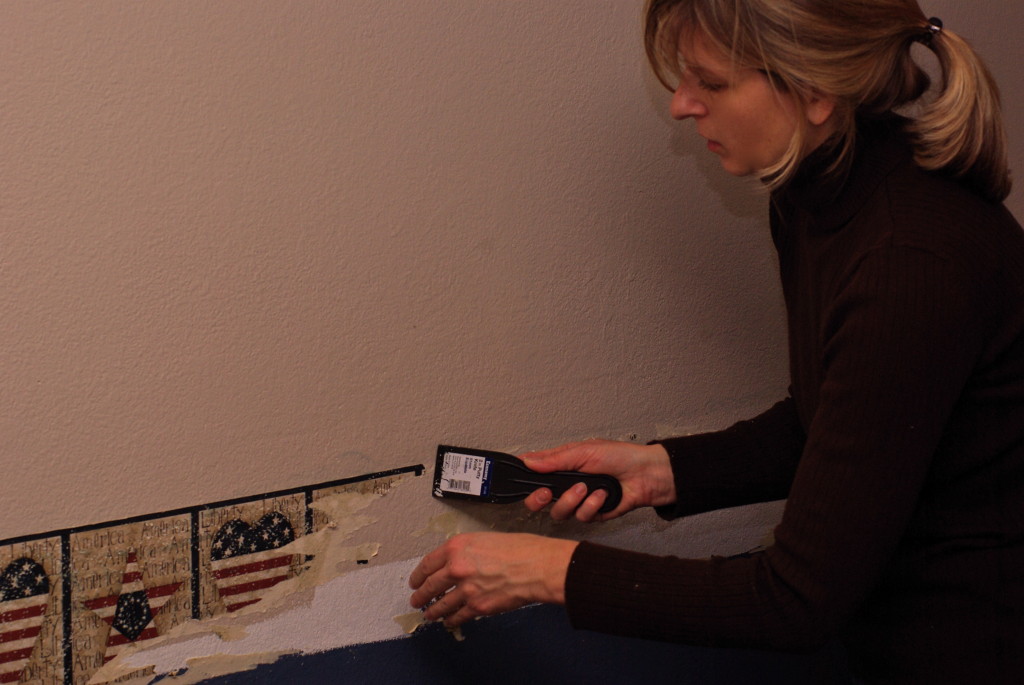 My son did not dig the hearts-and-stars border all around his bedroom wall.

Not too far into our first year of home ownership, we began repainting the walls in our living/dining room area. (We don’t actually use it as a dining room. We just have a really big L-shaped living room instead.) We decided to paint just one wall at a time, and after more than year we’d gotten to all of them except for the wall of green stripes, the janky wall.

“Why don’t we just paint over it?” Cane suggested.

Um, because that would make us the people the next owners of this house would curse and make fun of to their friends? Because I didn’t want to be that guy who takes shortcuts for an immediate, easy win that’s a big lose for someone down the road? Because everyone knows that removing wallpaper is a bad enough job, but removing wallpaper that’s been painted over is a task reserved for one of Dante’s circles in hell? (Or it should be.)

But I looked into it, and what I learned was that sometimes, even Bob Vila says it’s OK to paint over wallpaper.

He assured me we were sure, so I reluctantly undertook the project. I’ll skip all the details of the project (mostly because I don’t want to relive them), but it was a hard, messy job (oil-based primer, anyone?) that looked, well, kinda janky when it was all done.

We got the great idea to cover the seams with joint compound, which we sanded smooth before painting that oil-based primer. 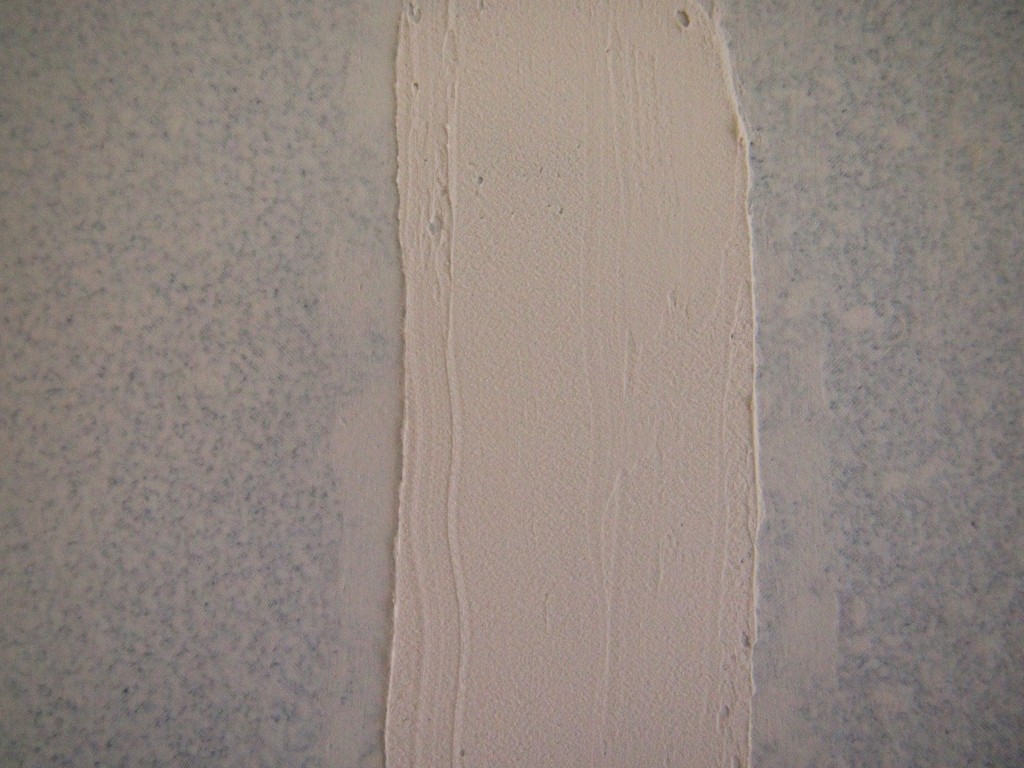 Despite the primer and the joint compound, the seams still showed through. So we just slapped another layer on. Janky is as janky does. We finally gave up and just painted it.

“Ah, put the furniture back and slap some art on the walls,” Cane said. “It’ll be fine.”

“I guess it’s still better than the green stripes,” I said.

The Cowboy covered a multitude of wall sins.

Life went on, and we moved on to bigger and better home improvements. 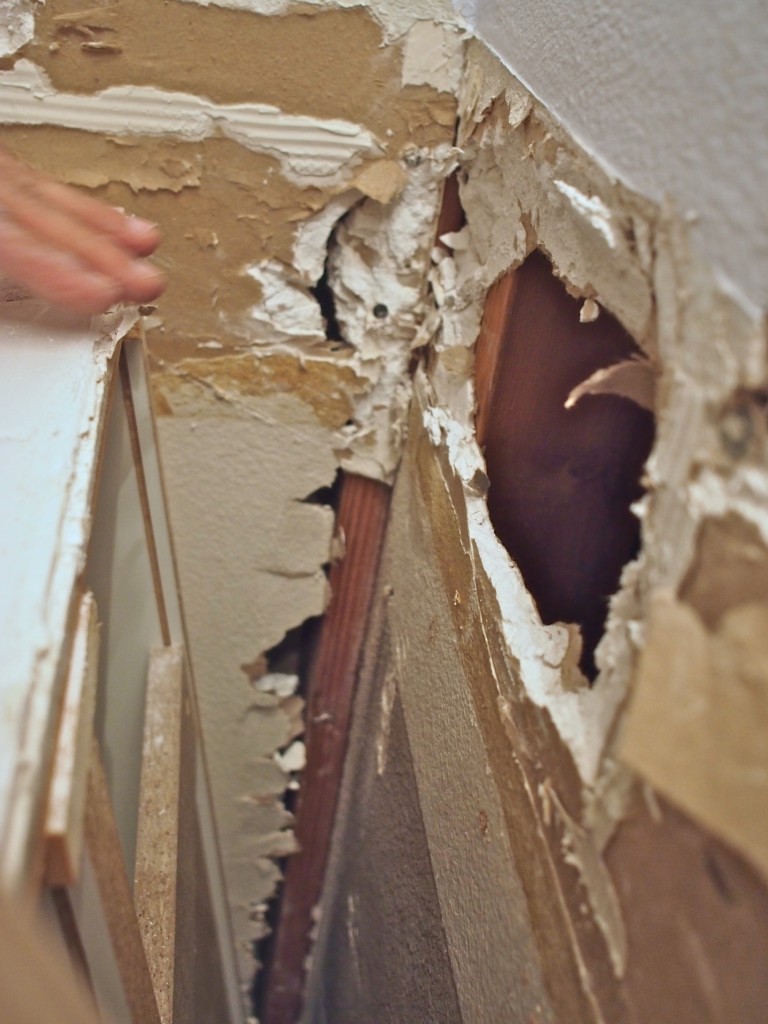 You wanna talk janky–look at the wall we had after removing our bathroom vanity!

Last summer, though, we decided that we didn’t really like the color we’d painted the walls in this room (in what felt like about 5 minutes after we’d finished painting the last wall).

“Oh, man. Are we going to paint another coat of paint on that paper?” I asked. That seemed more kinds of wrong, and I just didn’t want to go there.

Luckily, I didn’t have to answer my question, which allowed it to remain rhetorical, because we’d also decided that we were going to replace all the trim around the windows as we repainted each wall. This made the painting of the walls happen very slowly. We got the two main walls of the living room done last summer/fall, and then we stalled out. Because school, kids, life. 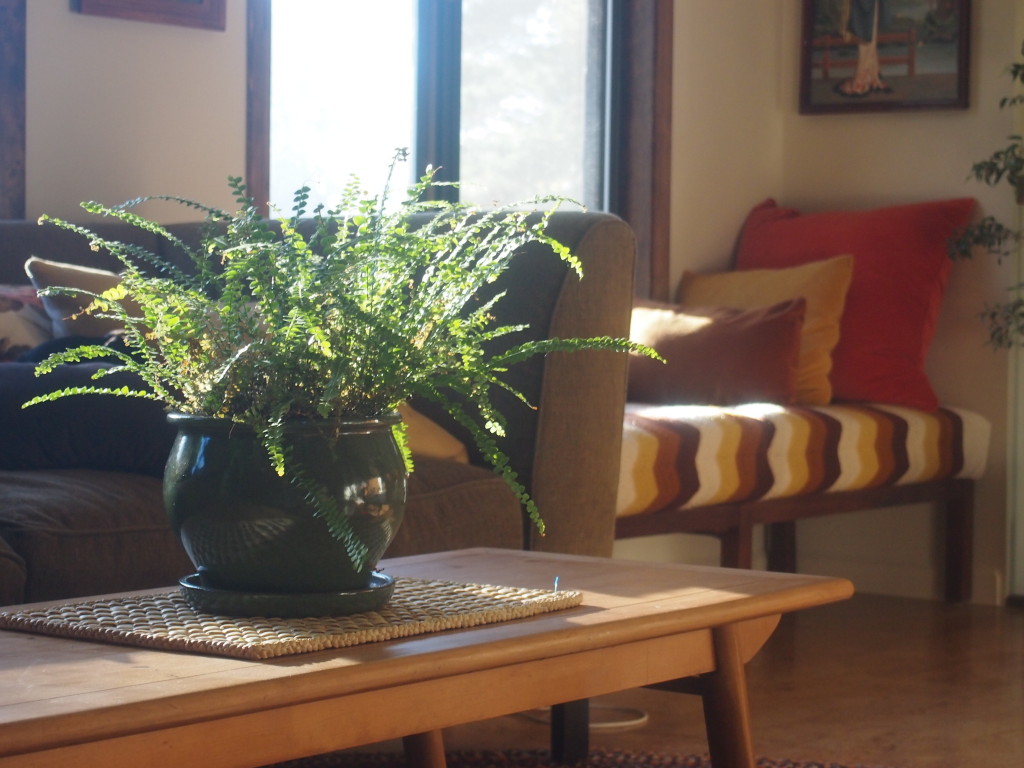 When we moved in, the trim on all the windows had been painted white. Then we painted them brown. Then we replaced the trim with stained wood. We rarely get things right on the first try.

That’s where things stood until the evening of the loud thunk and the flurry of barking wieners.

When I heard the noise, I thought for-sure that somehow, a bird somehow didn’t see the perpetual haze of the glass in our sliding glass doors and flew into it. That’s the only thing I’ve ever known to make a sound like the one I’d heard. I rushed into the room to see this: 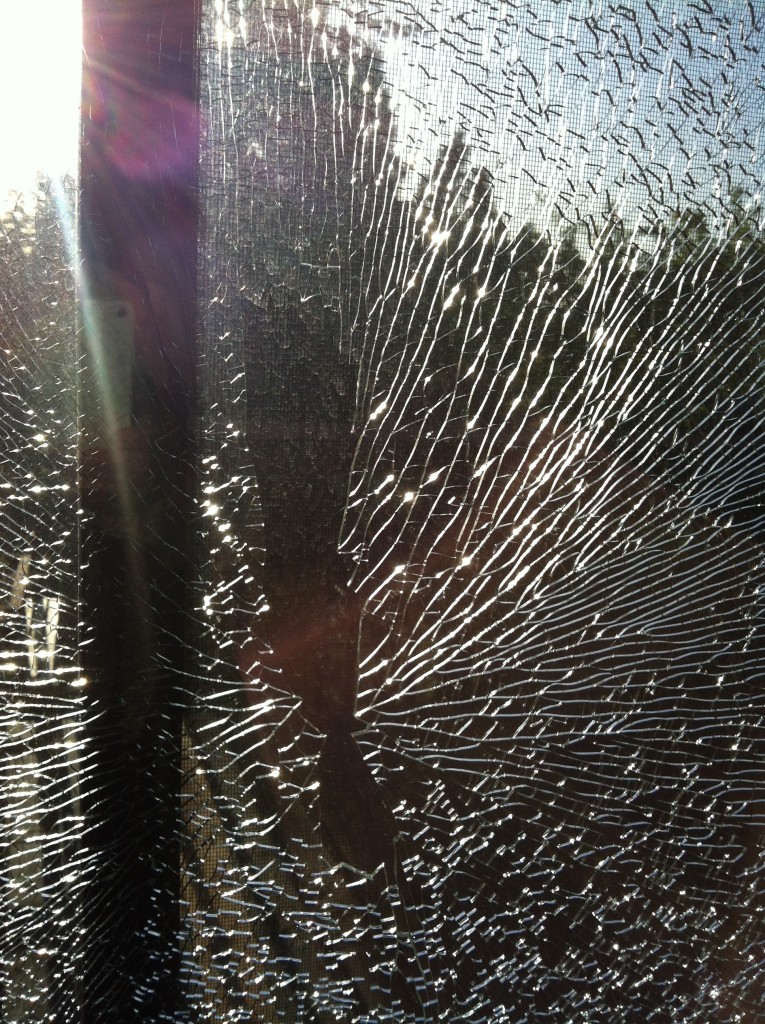 This isn’t actually what I saw when I first rushed in. I didn’t have the presence of mind to grab a picture until this event was well underway.

I scanned the deck for a bird body. No bird. Dogs still in the kitchen, barking their little fool heads off.

Did someone throw something at the window? I wondered. Hey, maybe I shouldn’t be standing right in front of it?!?

I scurried into the kitchen with the dogs, wondering what the hell was happening. I didn’t hear any more thunks, but what I did hear was more disturbing: A chorus of tinkly notes as the window proceeded to crack. And crack and crack.

Um, the sliding glass door is breaking” I texted Cane. 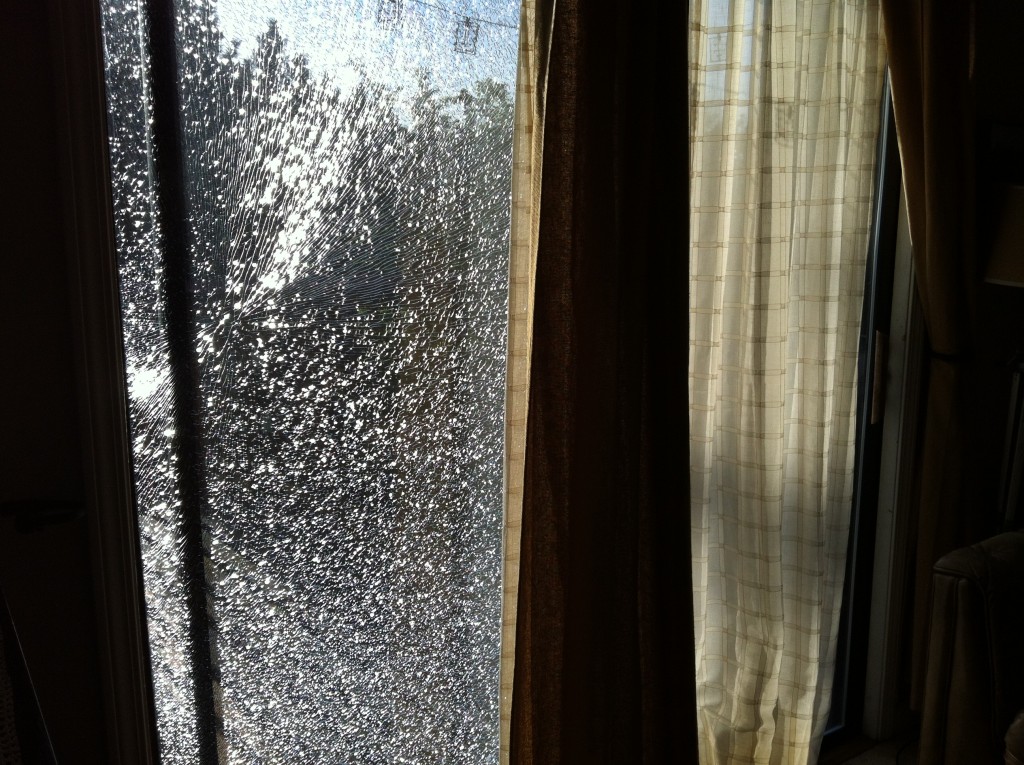 I then did what all of us now do when confronted with that which we don’t understand. I Googled “sliding glass doors spontaneously shatter” and learned that, indeed, I was not the first person to experience such an event.

Sometimes, tempered glass doors do just break, for reasons you can read about here. (Which might mean, if you really think about it, that this story started in 1978, when this particular door was installed.)

Who knows why our door shattered? All that really matters is that it did, spectacularly, leaving us with a mess of glass pebbles and a door with only one pane of glass.

I’m guessing that right about now, you might be wondering what this door has to do with our janky wall and edges and breakthroughs (the original premise/promise of this story). If so, this might be a good time to note that another of my favorite books is If You Give  a Mouse a Cookie, because every home improvement story I’ve ever lived is basically a different version of that one. 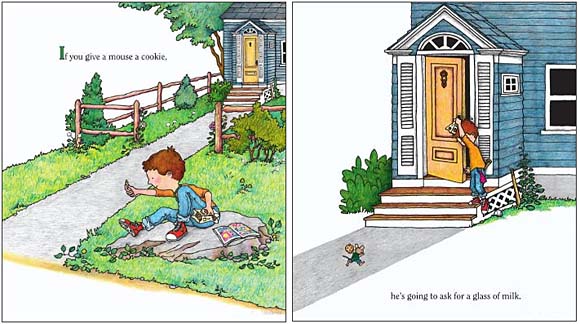 You might also be wondering how long this story is going to be, because this post just went over the 1,000 word mark–which is why I’m going to make it a 2-parter.

Rest assured, I will get back here to tie these ends together and wrap the story up in a bow–right after I share our amazing adventure at the Clackamas county fair.