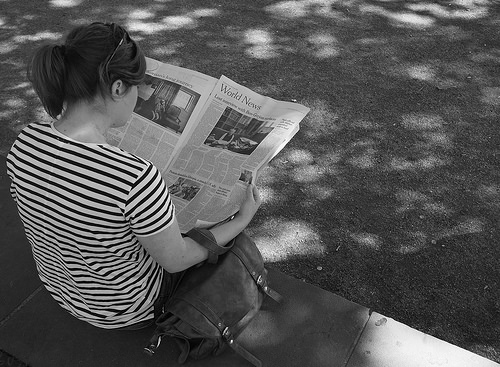 If I were to evaluate my high school journalism teacher, Miss S., through the  current thinking about what makes a teacher good, she’d get a pretty low grade.

Sometimes, she’d teach what looked like a lesson, sort of. I do remember her standing at the front of the room occasionally, sharing information about journalistic principles or practices for a few minutes. There were no learning targets on the board, no rubrics, no scoring guides, no real assignments other than the ones we were given to produce our student newspaper.

The teacher who chaired the English department told me that the journalism class wasn’t a good use of my time. When I shared that with Miss S., she laughed, and I understood that they didn’t like each other and that my presence in her class gave her a battle win in some kind of teacher war. It was the first time I understood that there were such things.

She was volatile and erratic. Once, in a fit of anger with one of us, she yelled and kicked a wastebasket across the room. I remember that, and the way we all went silent, afraid of what she might do next. We whispered among ourselves about what might be wrong with her. Someone once snooped in her closet and found an empty pint bottle. We wondered if she drank at school.

And yet, we produced an award-winning newspaper. Under her direction, our scope extended beyond the walls of our high school. She drove some of us to the state capitol so we could interview law-makers for a story about the impact of state budgets on our education. We wrote a story about the Green River Killer, who targeted young women in our area. We took national stories and examined what they meant for us locally.

Somewhere along the way, between flying trash cans and trips to the capitol, I learned the fundamentals of journalism that guide me as a consumer of information today:

One of my award-winning stories was about the dangers of “look alike” amphetamines, which students across the country were buying and selling. It included photos of such pills taken in our newsroom, as well as quotations from anonymous students who were dealing them in our classrooms. My principal did not appreciate the story. He wanted the names of my sources, the students who told me how they were doing business during class. For a people-pleaser like me, this was kinda scary stuff–but I was never really scared because I knew that Miss S. had my back. I also had the strength of convictions she’d instilled in me about the necessity of a free press and the duty journalists have to tell the truth and protect their sources. I wasn’t privy to the adult conversations that took place and don’t know what kind of heat she took from her boss, but I never did have to reveal mine.

When I went to a large state university and was looking for places that could make campus feel smaller, I sought out the newspaper staff. The first thing I saw when I walked through the newsroom door was a graffitied wall with “Fuck Objective Journalism” scrawled across it in huge letters. I was offended not by the language, but by the sentiment. Objectivity was a bedrock principle for me. I left and didn’t return for a few months.

Eventually I did, and I took the beat covering our crew team. I was not a sports writer, but it was a way in. I worked my way up to writing in-depth feature stories, and despite my colleagues’ irreverence (or perhaps because of it), I never abandoned the principles formed during my time with Miss S. Like so many experiences in young adulthood, though, it was one that showed me what I wasn’t cut out for. I hated calling people I didn’t know on the phone. I hated making people uncomfortable with hard questions. I hated writing under the pressure of a deadline and not having enough time to polish my writing or my thinking. Eventually I ended up working in education, not journalism.

As I’ve watched the demise of print journalism over the past decade, I’ve been thankful many times that I didn’t pursue a career in it. If I had, I may well have been objectively fucked, a victim of mass layoffs at a point where I’d be too old to easily switch careers but not old enough to retire. There are always casualties when industries and economies change, aren’t there?

But what’s happened in journalism isn’t the same as, say, what’s happened to the coal industry. Coal is, as one might say, a “disaster” for the environment. I truly do feel for those who are suffering because the backbone of their economy has snapped–especially those who, like me, are at exactly the wrong stage of life to be able to recover from such a catastrophic injury. But I also know that alternate sources of energy are what we need to survive as a species. I wish we could find ways to support those people without bringing back that industry.

Journalism is different, though. We need journalists–real ones, who investigate corruption and share truth and ask hard questions we all need the answers to–like we’ve always needed them. We need them perhaps now more than we’ve ever needed them. That’s something Miss S. taught me.

This Thanksgiving weekend, I’m grateful for many things, not the least of which is that in spite of the economic challenges facing those who produce print journalism, we still have newspapers that adhere to the principles I learned decades ago. I’m thankful that in spite of all that is currently troubling and uncertain in our President-elect’s relationship with the press,  we still have a free one. I worry about the fact that so many of our youth cannot tell the difference between valid and bogus news. I worry about the proliferation of fake and clearly biased “news,” which may very well have influenced the outcome of our recent presidential election. I worry about lowlife scum who care more about the personal profit they make from creating and disseminating misinformation than the damage they do to all of us through their actions. But I take hope from journalists who are the ones who really tell it it like it is, and those who vow to keep doing so in this strange new world we seem to be living in.

I’m thankful, too, for the public education I received that’s helping me navigate it. A high school acquaintance of my daughter’s recently shared that he distrusted a Pulitzer-prize winning journalist’s article in The Wall Street Journal because she “went the school route.” I wish so much–for himself and for all of us–that in his education he’d encountered a journalism teacher like Miss. S. and wonder how things might be different for him if he had. Like pretty much all of us, Miss S. was flawed, a human mix of strengths and weaknesses. I think of her often these days as I reflect upon what went wrong in our election, one of the first people from whom I learned that one doesn’t have to be perfect to be (and do) good.

(If you’d like to contribute to the continued existence of publications that provide accurate information about matters of crucial importance to us all, please check out the links on the Resources page.)