When I was a kid, I liked to sew. By “sew” I mean that I liked to attach pieces of fabric together by running them through my mom’s sewing machine. There were, of course, a lot of other things I had to do before that: choose a pattern/project, choose fabric, wash and iron the fabric, cut out pattern pieces, pin the pattern pieces to the fabric, and cut the fabric. I didn’t consider any of this to be “sewing.” 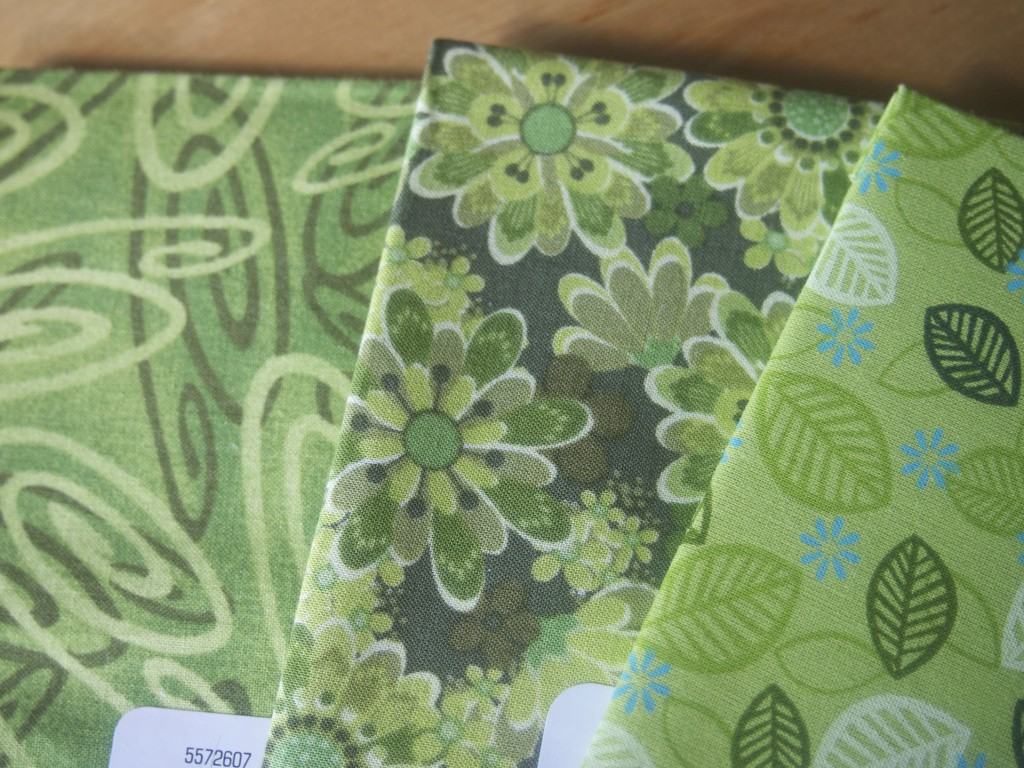 It’s really only been in the last few years, as I’ve taken on sewing projects for our home, that I’ve come to realize that “sewing” is all the actions necessary to get to a finished project. Running the pieces through the machine is often only a small part of the process.

I’ve been thinking of this in connection to our vegetable garden this past week. Back in March, I planted vegetable starts (which I wrote about here.) 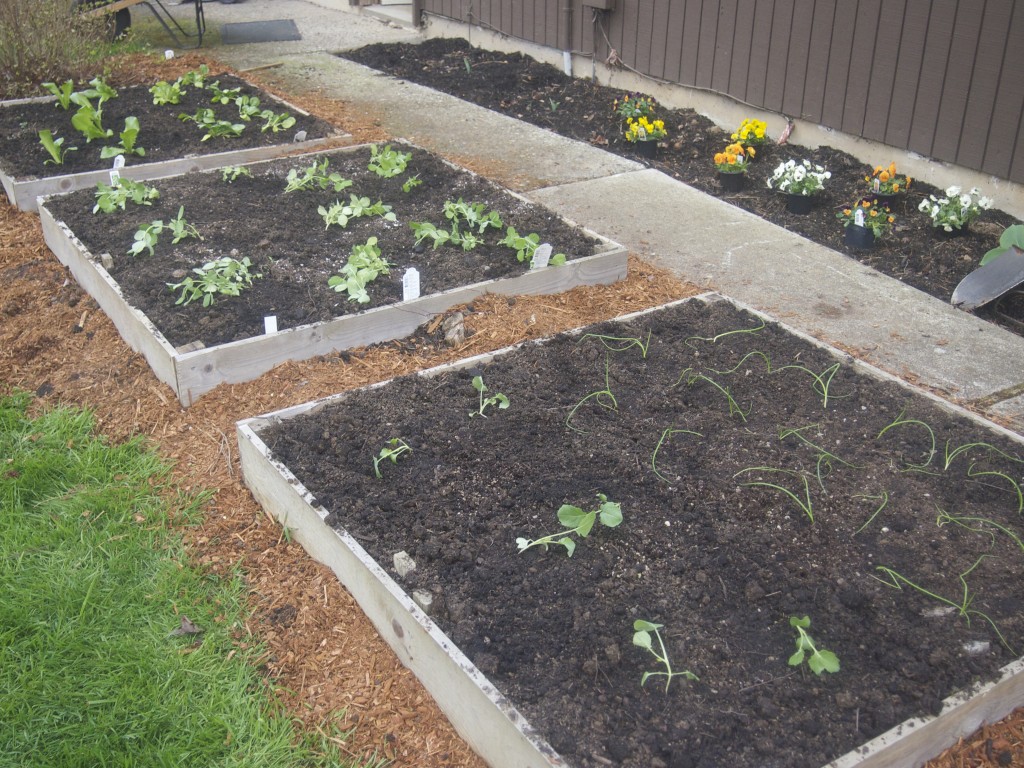 Before I put them in the ground, there were a fair number of things I had to do. I had to clean up the beds, pull weeds, amend the soil, plan what to plant and where, dig the holes, and put the starts in. For some reason, I haven’t tended to think of this as gardening. Gardening is something one does after the plants are in the ground, right?

“Gardening” to me has meant watering, and pulling weeds, and fertilizing, and dead-heading, and that kind of thing. It has meant tending the plants. So, imagine my surprise when I stopped a week or so back to finally pay attention again to my vegetable starts and saw this: 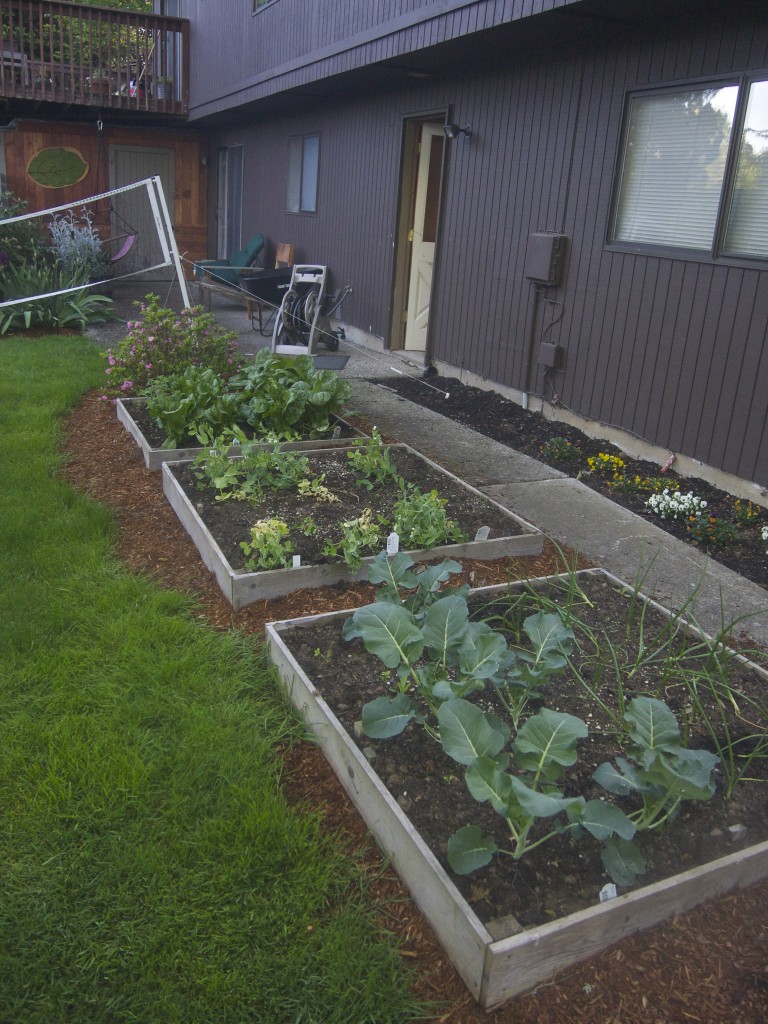 As I mentioned in my last post, I’ve been going through a challenging time, and I really haven’t done anything with the garden since I planted the starts. We’ve had days both rainy and sunny in the weeks since, and when I happened to think about the garden I knew I didn’t need to worry about watering and couldn’t help it if the plants were getting too much.

So, when I really looked at it one recent morning while letting the dogs out to pee, I was rather astonished to see that the spinach and lettuce had exploded into lush, vibrant leaves. 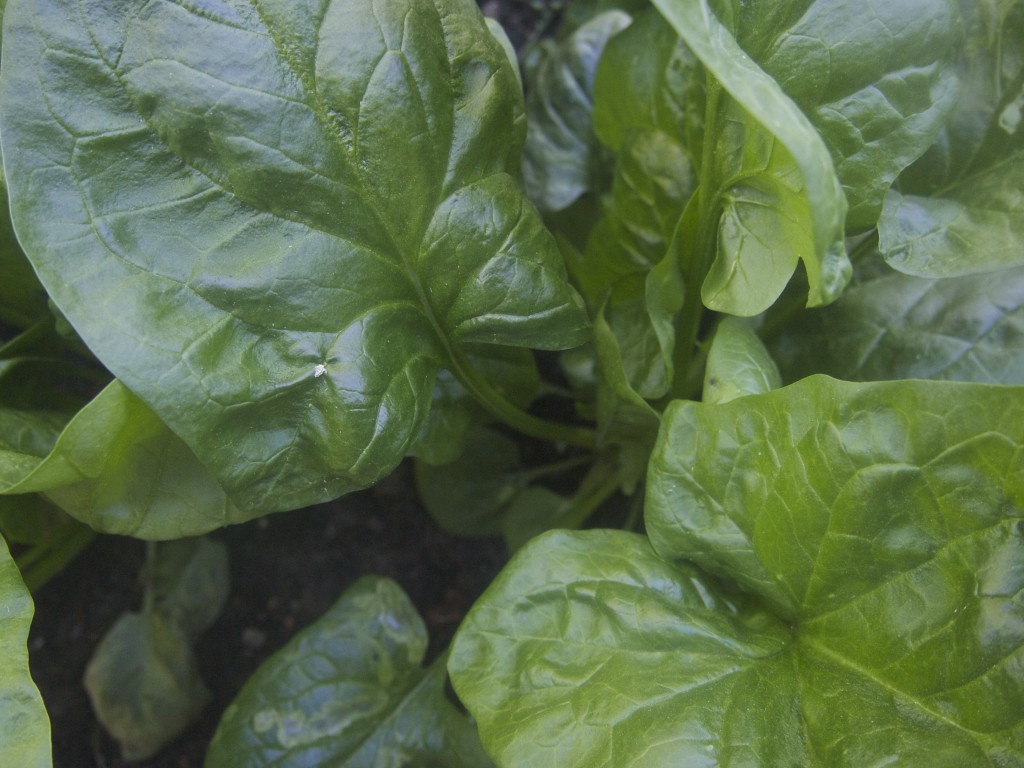 Honestly, it felt a bit like cheating. How could I, who really knows so little about how to make things grow, who had really done nothing after putting some starts into the ground, end up with such bounty? 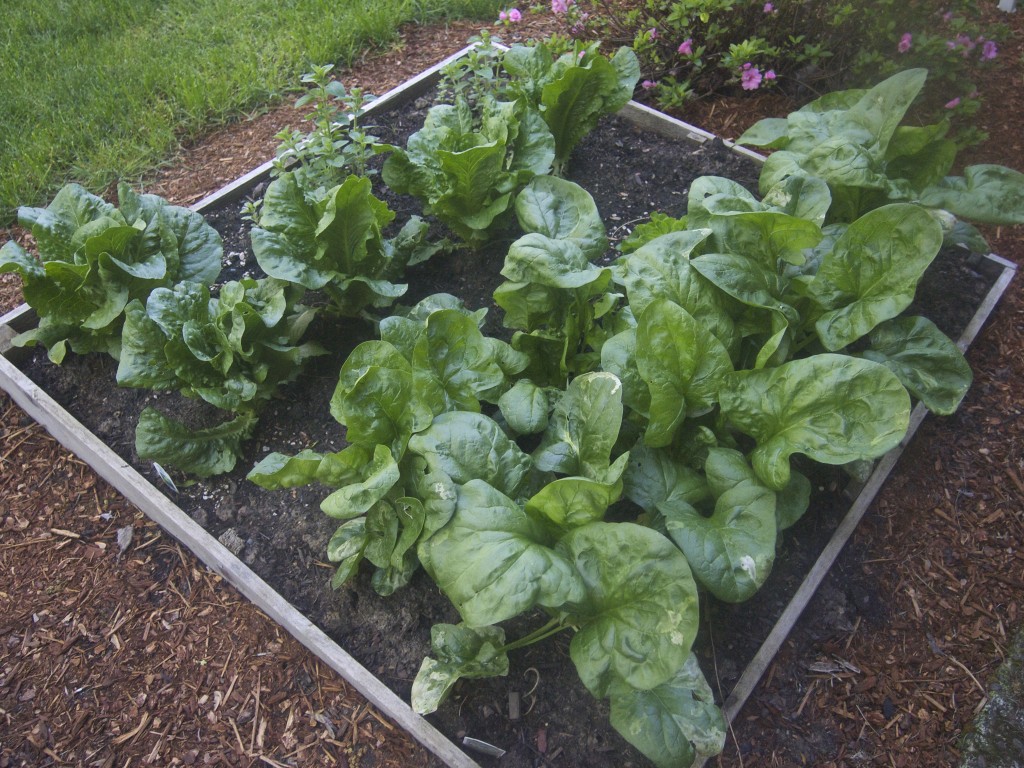 Well, because letting things lie is often a vital part of the creative process. Even in sewing, where so much of the project requires me to be, literally, hands on, there can be value in walking away for a bit–so that I can come back with fresh eyes and see how I might change things a bit to make the project better.

Poems, I think, tend to grow much like my spinach. We can do all kinds of things to feed the soil of our minds–read poems, collect images (literally or figuratively), listen to poetry, write in journals, watch and listen and live in particular ways–none of which feels like writing poetry, but which is as vital to the germination of poems as my soil preparation was to my spinach. 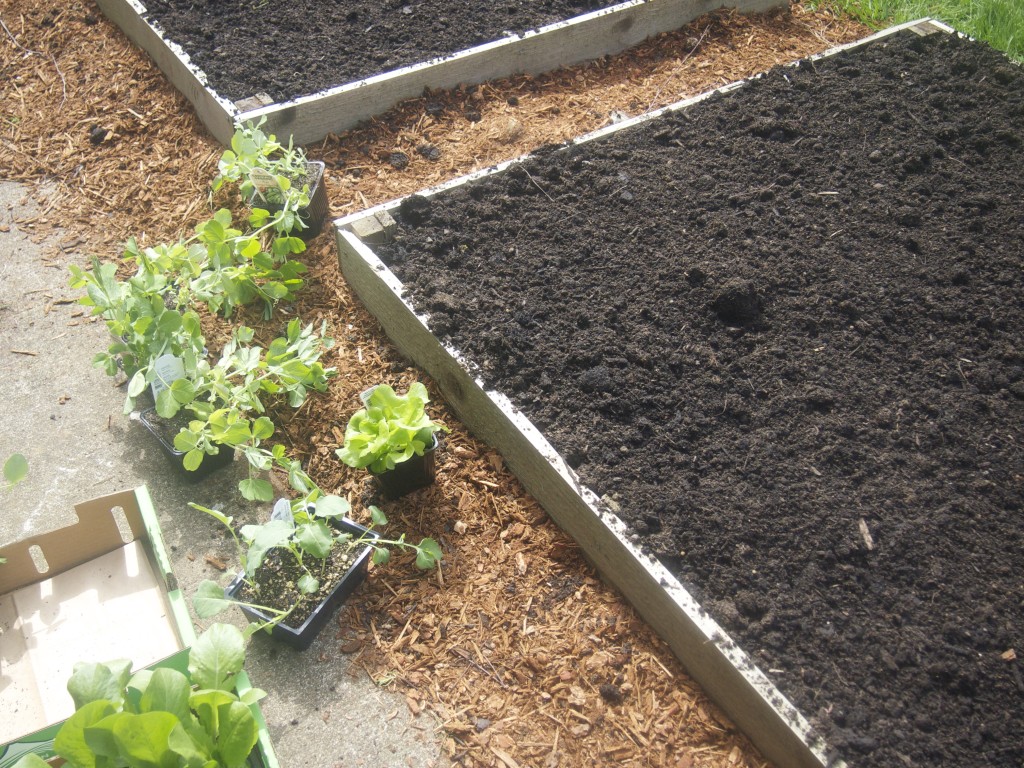 Sometimes, the growing conditions are largely out of our control. We cannot do much to stop the rain that falls into our days or to escape heat that blisters our lives, leaves us parched and wilted. Some conditions can only be endured, until they pass or we do.

Rather than fight it, I’m coming to think it’s best to accept it all as part of the process. There are seasons in which the poems won’t–can’t–bloom, but there are others in which they grow easily. Half the key to flourishing is knowing when to plant and when to harvest. 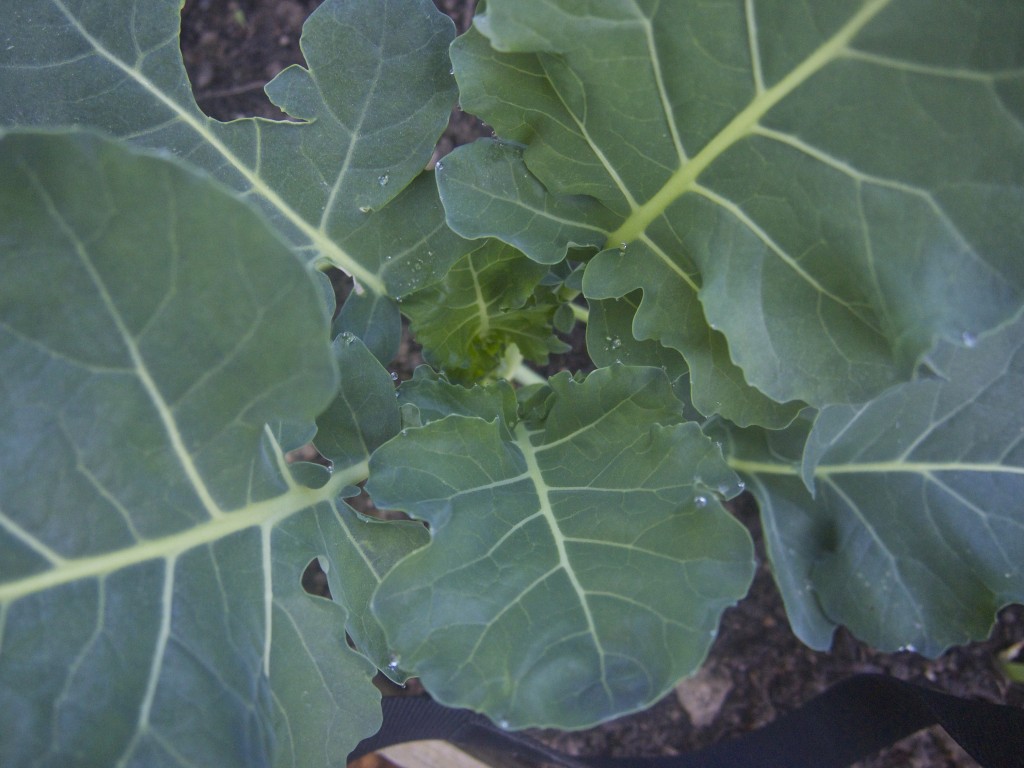 The broccoli still has a way to go…

And so I’ve realized that there was no cheating in the case of my lovely spinach, and that every leaf is fruit of my own creative work. I’m realizing that whether I am growing poems or spinach, there is a vital part of the process that requires me to leave things alone. There is a part that is beyond my control, that is determined by things I cannot put my hands on. 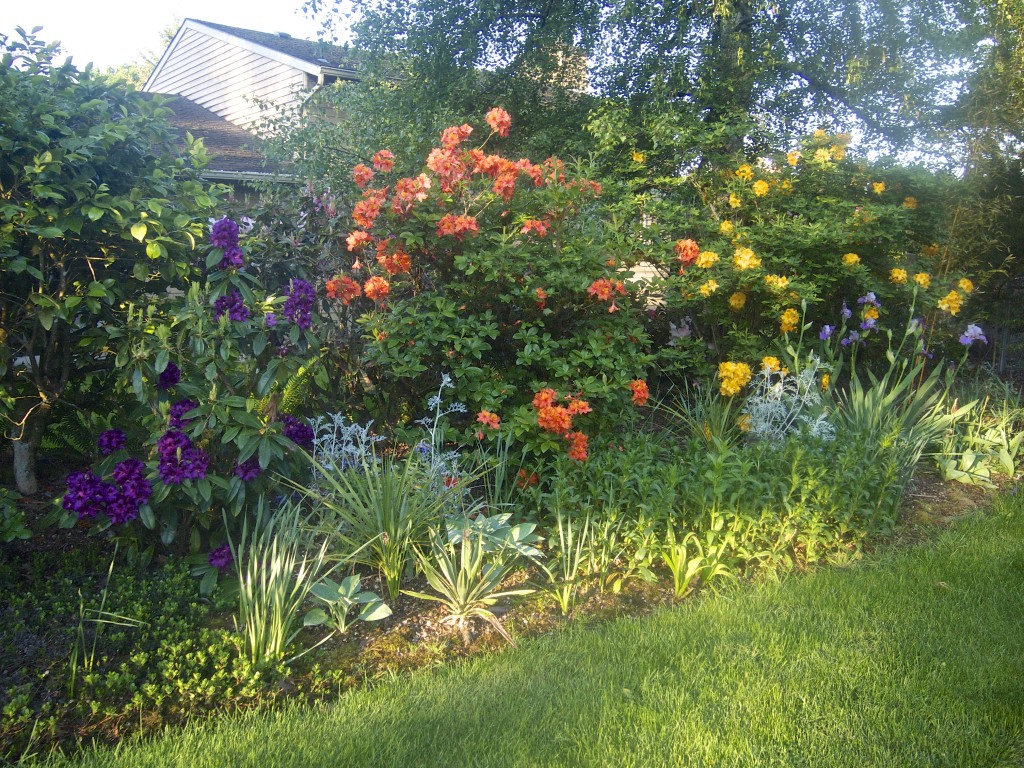 We’ve hardly touched this stretch of garden in the past 8 months, and yet look at the riot of bloom.

There is one other important way in which my spinach is like a poem:  It is just as impractically lovely and nourishing as any poem I’ve ever written.

I planted only a few spinach, because as a gardener I am really in the beginning stages. I don’t know or understand much yet about timing–the cadence of growing and harvesting. It was progress this year to think in terms of early spring plants. This is why all of my spinach plants were ready to harvest at the same time.

If my goal were to create a garden of food we might subsist on, I’m far from victory. I don’t know how to grow things that reach maturity at different times, so that we might have a harvest that stretches over weeks, instead of days.

So, I searched spinach recipes and found one that required almost every leaf I’d grown. We picked it, and put it all into one dish. One! 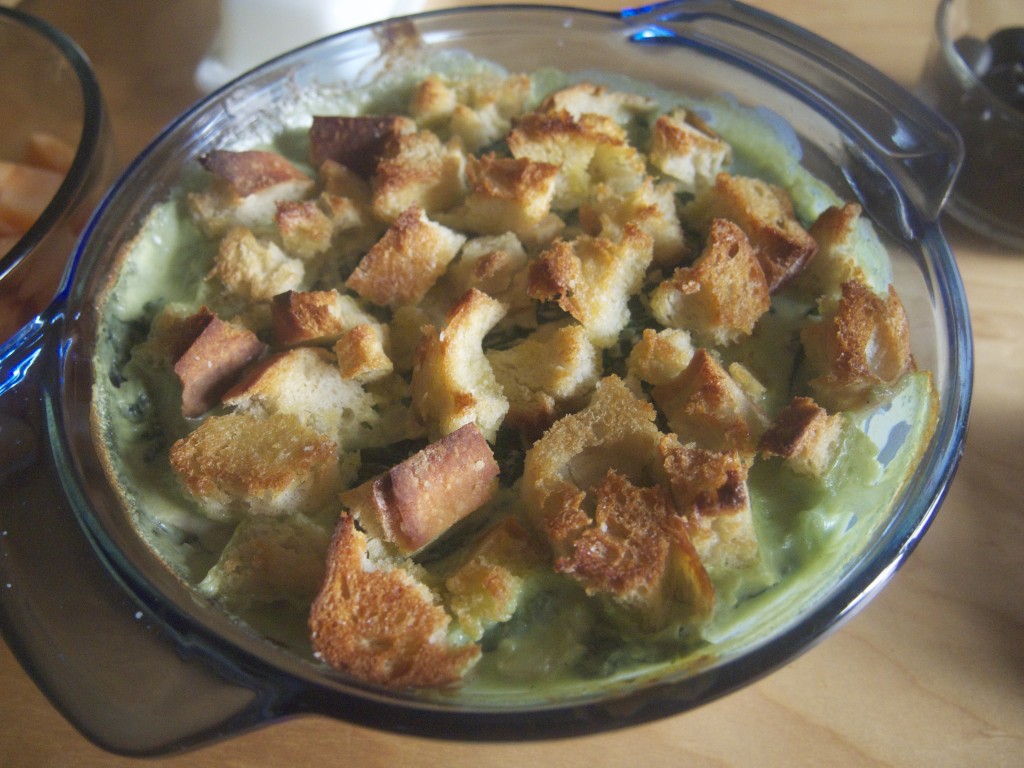 This required four cups of spinach.

Considering the plants, the soil amendments, the fertilizer, the time I spent before planting, well…that was one expensive casserole we ate last week. But it was a lovely casserole. It was quite satisfying to eat food I’d grown myself, to see my creative work feeding us in such a corporeal way. But it was also frivolous in the way that poems are. It was the opposite of frugal, and I could no more survive on my spinach than I could my poems. 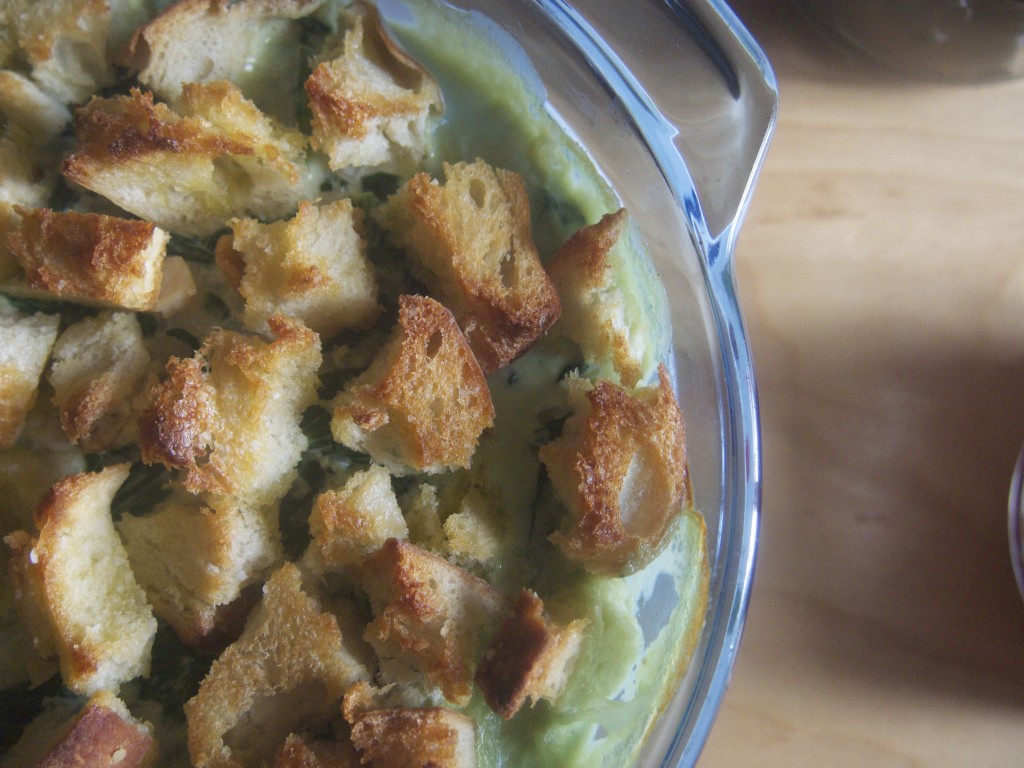 (My son, who is generally a fan of neither casseroles nor green vegetables, had seconds! If you’d like to try this recipe yourself, you can find it here.)

14 thoughts on “The poetics of spinach”