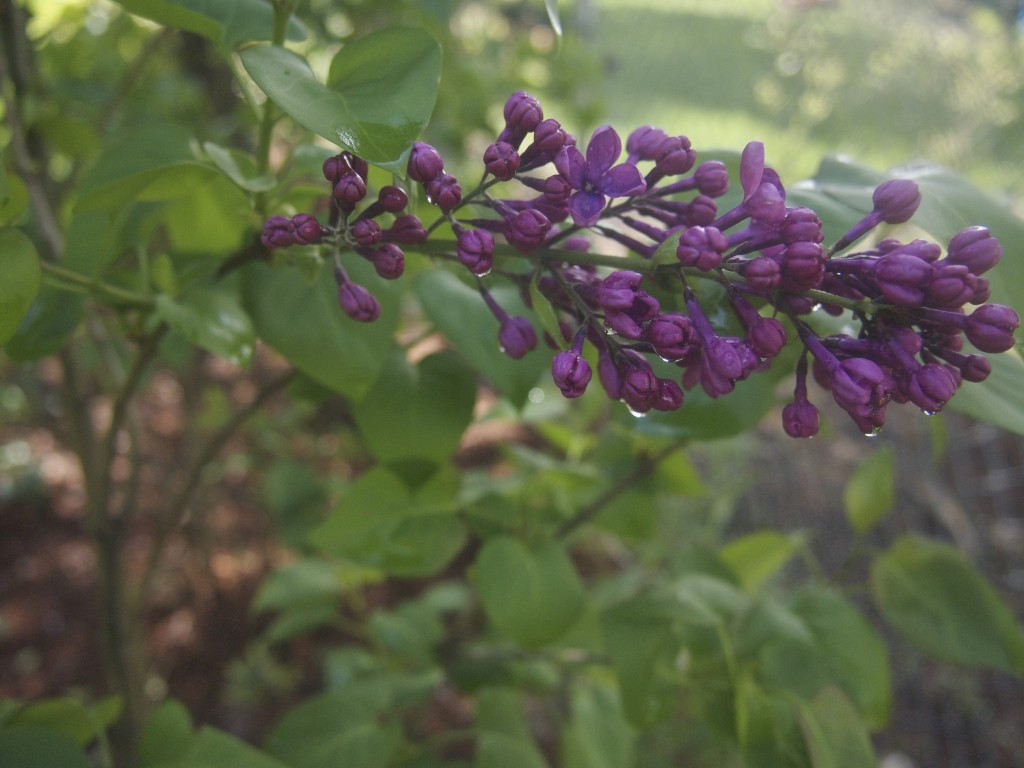 If you are an online friend, you may have noticed that you haven’t heard much from me in quite a while, either here or in your own online space. As is so often the case when a relationship quiets, it’s not about you. It’s me.

It’s about something I’ve rarely spoken about and never publicly written about, here or anywhere else: depression.

Depression is not a constant companion of mine, but it has been a recurring visitor throughout my life. It’s the kind of guest who occasionally stays longer than is reasonable. Once she fully unpacks her bags and moves in, it’s hard to get rid of her. She wears me down to the point that I feel unable to do anything to send her on her way. That’s the trouble with depression, right there:  The main symptom, I think, is knowing that you need to be doing some things to feel better but feeling incapable of doing any of them.

It’s such a sneaky, insidious thing for me. It comes on slowly, making it hard for me to even realize what’s happening. It looks like the problems are external–and real, outside situations are the precipitating cause for me–but at some point something crosses over and the actual source of trouble lies within.

Now that I’ve had it named for me, again, I can see that depression knocked on the door well over a year ago, and the first real symptom was my loss of interest in doing much of anything creative–despite the real joy I once felt in the large creative project of making a house/home with Cane and writing about it in our blog.

When I began writing this new blog, I thought perhaps the problem was about the kind of creative work I’d been attempting. In the past two months, though, it has become increasingly clear that my struggles aren’t about reasons for creativity, or creative mediums, or time, or any of the other things I’d considered. Regardless of how I’ve tweaked any of those things, most of the time I just haven’t been able to feel much more than listless about creating or interacting with other creative people.

Until a weekend or two back, when the clouds parted for an hour or so on Saturday morning.

The night before, I’d read a post on a writing blog, Bethany Reid’s A Writer’s Alchemy. She shared Jane Hirshfield’s “Woman in a Red Coat” and suggested a writing prompt based upon it (“write a poem that, without ever saying ‘spring’ or ‘April,’ without tulips or daffodils or cherry blossoms, is obviously about spring”), and for the first time in years, I felt the stirring of wanting to write a poem.

The next morning, I sat down at my kitchen table and looked out the window and then the words came. Most of it came out in that first session, but after a week of tinkering, I ended up with this:

Some Mournings
All you see through
the kitchen window are beads
of rainwater dangling from the needles
of your neighbor’s pine, each a clear jewel gleaming
grey against the sky’s dull cheek.
You know those translucent gems
hang above swells of emerald lawn,
sumptuous velvet clothing
earth fecund with possibility,
but your eye searches only for what is missing:
blooms not loosed from lilac knots,
eggs not hidden for a holiday hunt,
wings not emerging from the chrysalis of your grief. 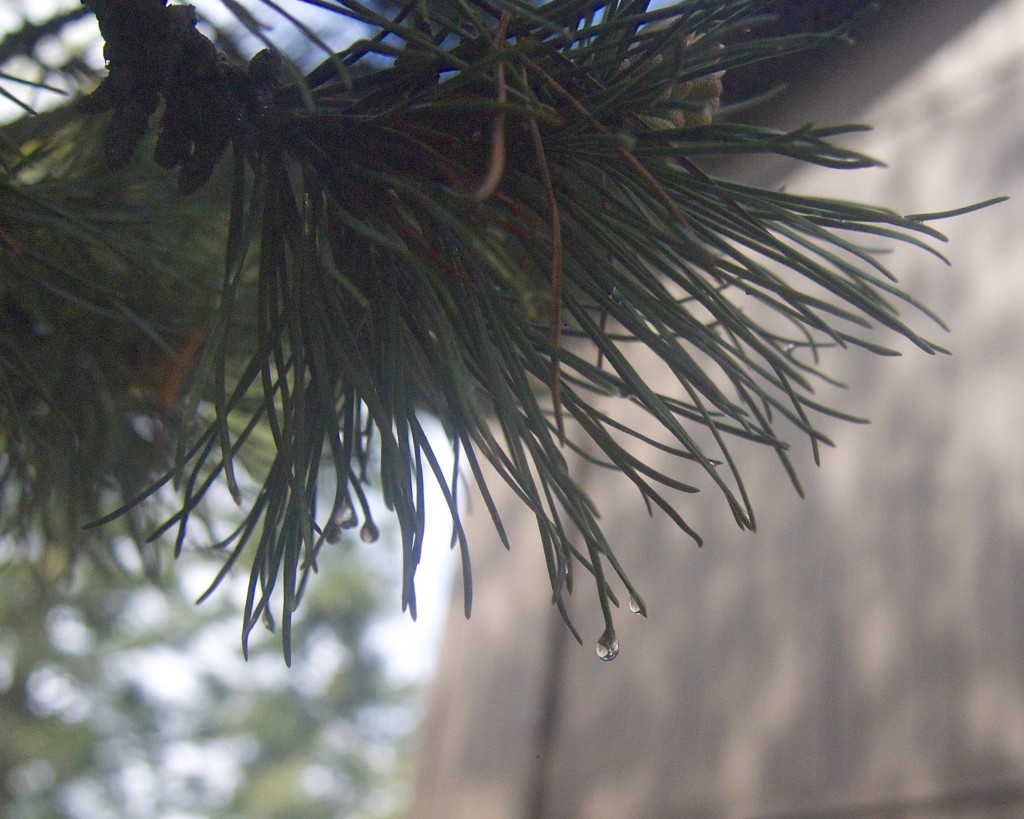 Perhaps part of the want’s origin is that the prompt came from Bethany, a writer I first met just about 30 years ago in Nelson Bentley‘s poetry workshop at the University of Washington. Bethany was a little older than I, and far more skilled. The editor/publisher who published her first book also published my only one, and he pointed me to her blog a few months ago. I was happy to see that she is still writing, has never stopped writing, even though it brought to the surface disappointment and regret and sorrow about my own work as a poet.

In the past few weeks I have been thinking of those who exhort would-be writers to find the discipline to write, and all the years I thought I didn’t because I lacked some kind of necessary backbone. I’ve been thinking of Tillie Olsen‘s Silences, that seminal treatise on the barriers women face in finding the conditions necessary for substantial creative work. But it was another work, a blog post by Momastery’s Glennon Doyle Melton on connections between truth-telling and depression, anxiety, and addiction, that has seemed most important to me.

Now, maybe this is just a case of the blind leading the blind, but she put into words something that I’ve long felt. She suggests that, perhaps, the problem really is in the world more than it is in those of us who have such difficulty accepting it on its own terms:

But other times—we turn on the news or watch closely how people treat each other and we silently raise our eyebrows and think: Actually, maybe it’s not me. Maybe it’s you, world. Maybe my inability to adapt to the world is not because I’m crazy but because I’m paying attention. Maybe it’s not insane to reject the world as it is. Maybe the real insanity is surrendering to the world as it is now. Maybe pretending that things around here are just fine is no badge of honor I want to wear.

Yeah. Maybe the logical response to the world and the often-heartbreaking condition of simply being human, with all its difficulties and struggle and loss, is to shut down. Because that is what depression is for me:  It’s not about getting really sad, it’s about getting really numb. It’s about turning away.

Writing that’s worth anything demands that we see and feel. You can’t write when you are numb and turned away, because what truthful writing demands most is that we pay attention, that we care, that we feel hope. Because if we don’t feel hope and write the truth, what’s the point of writing (or painting or singing) anything?

We like to romanticize our mentally ill and addicted poets and artists who create great work. We like to think that their art emerges from whatever it is that makes them fragile, and we acknowledge that, yeah, it sure must be a bitch to have to live with that, but isn’t it sort of wonderful, too? To be such an artist?

Well, I don’t know. I’m not one. But from my own brushes with with both mental difference (thanks for giving me an alternative to “ill,” Glennon) and creative expression, I think not. I’d like to walk through the world without seeing all the cracks in it. I’d like to pass others on the street and not feel how hard and painful and difficult simple existence is for so many of us. I would like to have no more days in which being human feels too difficult to bear and I wish I no longer had to.

Since I know that’s not really possible, for me and for many others who struggle with this kind of sensitivity, what I’ll ask for instead is that we might see some nuancing of the archetype of the mentally ill artist. I’d like us to realize that, most likely, the Virginia Woolfs of the world create in spite of their difference, not because of it. There are a lot of us who never do, and there are so many healthy artists who create great work. Sure, a certain kind of sensitivity is necessary to produce meaningful work, but slipping over into illness is not a requirement for art. It’s not romantic and it’s not productive.

For me, the whole thing is a Catch-22. Writing fuels depression. Not writing does, too. Makes me feel like a ping-pong ball, flying back and forth between paddles of competing need, or like a tightrope walker, constantly keeping my balance while walking a narrow, tottering line from birth to death, holding my core taut to keep from swaying too far one way or the other. 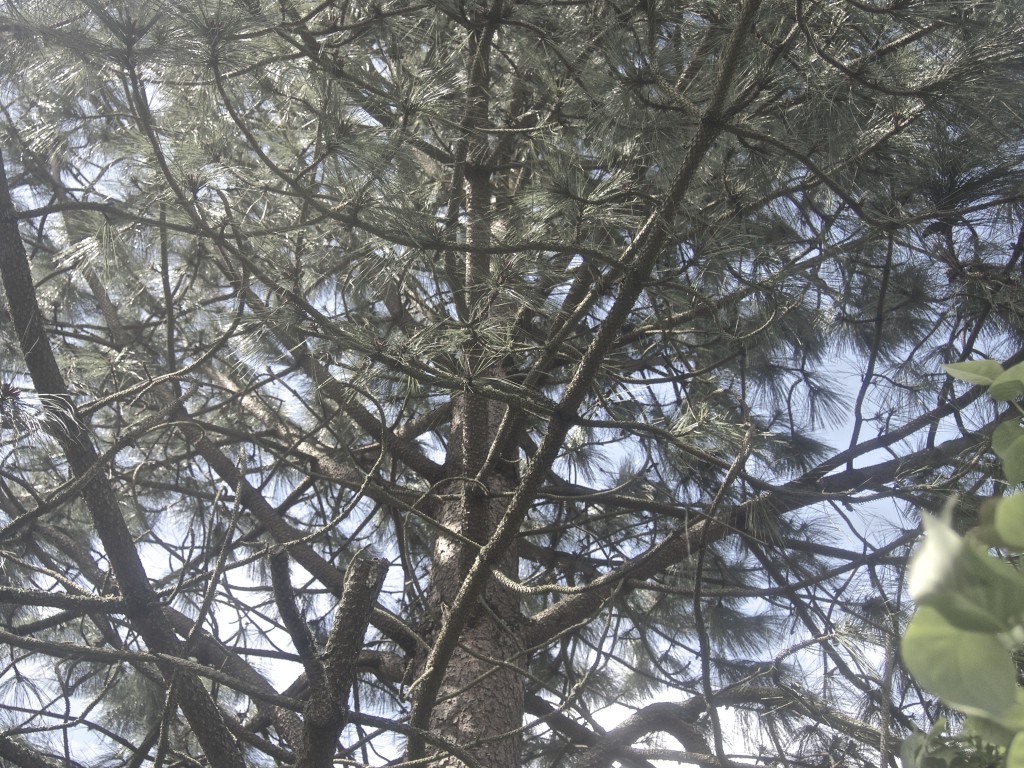