Once, as I was regaling a friend with the latest tale of my ex-husband’s abhorrent (to me) behavior, she laughed so hard she had to wipe tears and said, “You have to write about this! It’s hysterical.”

“What do you mean? This is terrible!” I said.

“Oh, I know,” she said. “But the way you tell it is hysterical. Seriously. You have to write about this some day.”

I have never thought of humor as my thing. I was the kid adults described as “7 going on 37.” When I was a preschooler, my grandmother’s sister called me The Judge. Even now, I almost never LOL. 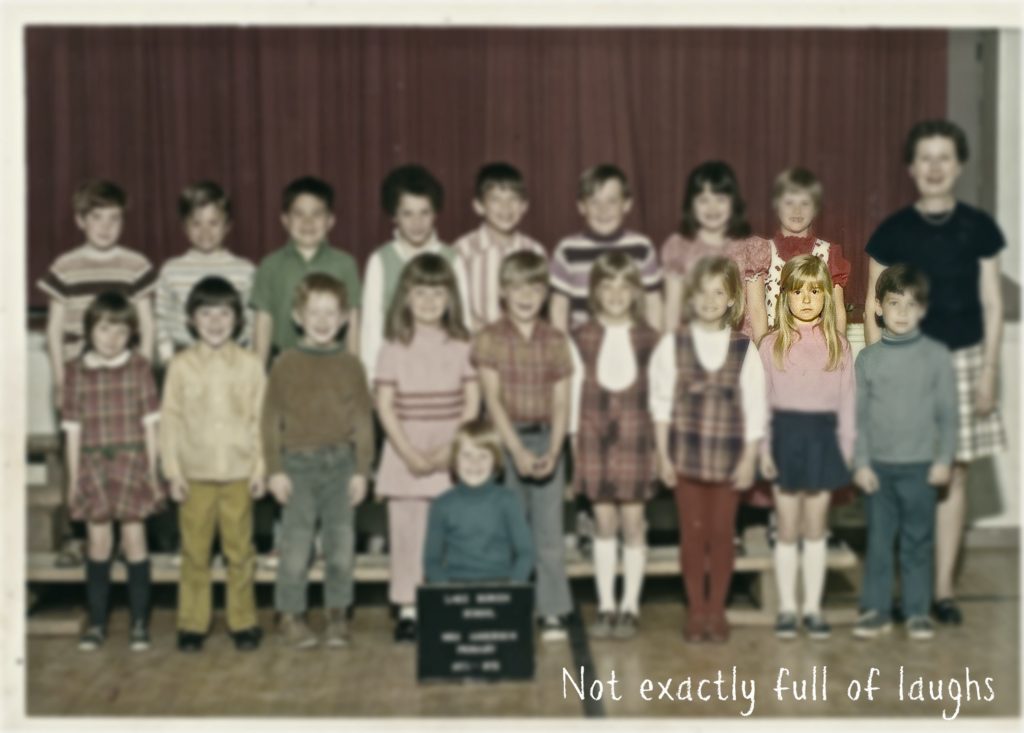 As I explained on my About page, I once thought I could find my way to lightheartedness and laughter through crafts (hah!), but I’ve recently abandoned that.

a. I knew I’d need something positive this fall to fill the spaces opening up in my life.
b. I do better creative work with structure. Especially structure I’ve paid money for.
c. I’m still hanging onto the idea that this is the year of Voice.
d. I like Kate, who was in the cast of Portland’s Listen to Your Mother with me earlier this year.

It was really mostly D. For me, whether or not a class is good is almost never about the topic. It’s the teacher–and Kate is a wickedly good writer and a warm, interesting, kind person who does not suffer fools gladly. I knew I would learn stuff from her.

After our first class meeting, I decided that this is probably going to be the best money I’ll spend all fall. (Although I did, this weekend, finally find a pair of jeans that feel good and fit well and that were made in the US and sold in a small, locally owned shop and did not cost more than the hospital bill for my premature twins. That’s right up there, too.)

My biggest take-away so far? Humor doesn’t have to be LOL.

In fact, although I really liked Kate before signing up, I think I might now love her just for saying that she’s not a fan of A Very Popular Humor Essayist because their writing is mean. And that good humor isn’t mean. That being droll is being humorous. That there seems to be, I don’t know, a kind of humor that is serious.  I often find the world (and my walk through it) infinitely amusing, but when I try to share my amusement it seems there are always people telling me to look on the bright side or cheer up or not be so hard on myself or some such thing.

I want to snap at them, “I was being funny, dammit!”

Clearly, there are things I could learn.

Anyway, I’m sharing here a piece of writing I began in our class. Our prompt was something called a list essay (which is, as you’d think by its name, an essay in the form of a list). The topic:  A list of things you won’t do tomorrow.

It took me a bit to get started. My first few attempts were less than riveting:

I won’t wear yoga pants.
I won’t drink a latte.
I won’t wait in the pickup line at school.

Then I started thinking about a concrete tomorrow–the actual tomorrow I was going to be living, which was a Friday on a weekend Cane wouldn’t be home. That sent me down the path of thinking about all the different kinds of Friday nights I’ve lived in my life. The list I wrote (and shared) in class isn’t this one, but it’s what this one started from:

What I Will Not Do This Friday Night

Sit on the couch with my mom and my dog Fritzie, eating popcorn and watching Carol Burnett.

Lie on the living room floor with Fritzie and not-watch TV while wondering what the tall, skinny boy in the locker next to mine is doing right now.

Go to a high school football game and shake my pom poms in front of the crowd.

Drink a half-rack of Rainer pounders with my boyfriend and eat nachos and call it dinner. Feel rich even though we live in a shitty apartment infested with roaches.

Know, with righteous conviction, that my work matters.

Fall asleep on the couch in front of a movie to avoid sex with my husband, a guy I once ate nachos and drank beer and laughed with on Friday nights.

Go into my babies’ room after they’ve gone to sleep and rest my hands lightly on their chests to make sure they’re still breathing.

Get home from “date night” by 7:00 so our babysitter can make it to the football game.

Snuggle my kids on the couch in front of a Disney movie while their father sleeps in his chair across the room.

Anything with a husband.

Wonder if I should be writing more poems and grading fewer papers.

Make Grandma Spaghetti, which the kids will eat whole platefuls of even though it won’t be as good as Grandma’s.

Swallow hard at a high school football game because the cheerleaders and the jocks and the band nerds and the self-conscious kids shivering in their thin hoodies are so damn tender it makes my throat ache.

Drive my daughter home from school, wishing I could listen to NPR on the radio but letting her bounce from one synthesized song to another because pretty soon I’ll be able to listen to NPR any time I want to.

Putter contentedly around my home.

Make dinner for my entire family and wish we could get through just one meal together without someone turning silent or mean.

Knock on my daughter’s door and poke my head into her room to tell her goodnight.

Slide between flannel sheets and fall asleep spooned into the body of the man I love.

Know when my daughter slides between her own sheets 3,000 miles away from mine, or what sounds are the last ones he hears before closing his eyes in the apartment that isn’t our home.

I know, it’s not funny. But I like to think there are moments of humor in it. Not the LOL kind. But humor the way it so often appears in life:  quietly, on the edges of things, or in the spaces between them.