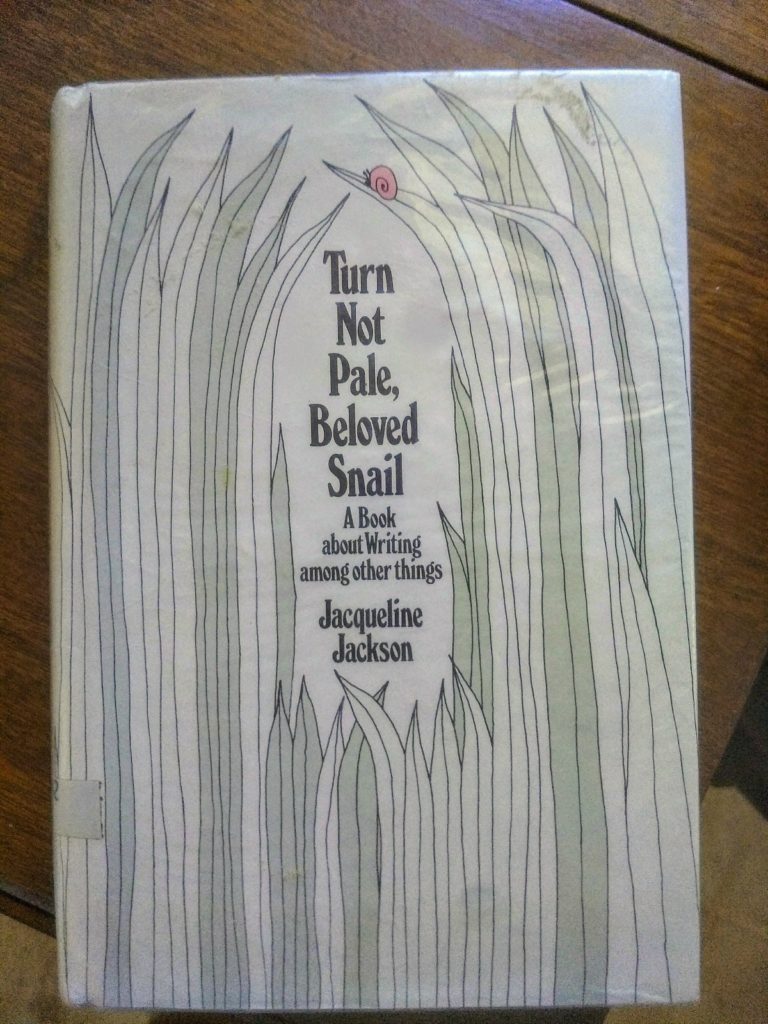 I stole this book from the King County Library system. I didn’t forget to return it. I didn’t lose it and find it years later. I made a deliberate, conscious, and purposeful decision to keep it because I needed it and back in 1981 I didn’t have any way to get my own, lawfully-owned copy.

I happened upon it by chance; I worked as a page at the Burien library, which was, it seemed to me, a rather twee (though it would be years before I was introduced to the concept of “twee”) job title for those of us who shelved the library’s returned books. Sorting and shelving books was a fabulous way to discover titles I’d never have otherwise found, and this was, perhaps, the best of the treasures I uncovered, for it helped me find a way back to writing.

Kind of ridiculous to think that, at 17, I’d already lost my way as a writer, but I had. Actually, considering all the ridiculous things we do and say to children around the subject of writing, it’s not ridiculous at all. At any rate, I’d lost my way, and this book helped me find it again.

“What do you do with this book? There aren’t any rules. Start anywhere and go anywhere….If a teacher likes the book, don’t let her (or him) shove it down your throat and make lessons out of it, unless that’s the way you want to use it. And tell your teacher, if you have to, that the kind of writing this book is about isn’t a spelling assignment, or a lesson in grammar or handwriting or how to make paragraphs. This writing is to get down your good ideas, and what you think and feel inside.”

The author, Jacqueline Jackson, wrote children’s books that I didn’t find particularly compelling but this book gave me a vision of what life as a writer could be:  One filled with kids and books and talk about books and humor and joy and mess-ups that were not failures or potential triggers for frightening adult anger but material for great stories. (There’s a whole chapter on the merits of being horrid!)

This was no how-to-be-a-writer guide that required me to live my life as a loaded gun or end it with my tragically young head in an oven. It was a book full of anecdotes and kids and dogs and mishaps and references to books I already loved (Harriet the Spy!) and books I was sure I would love as soon as I read them. A big part of me, even though I was nearly grown, longed to be a child in this household. (Her children had wonderful names–the youngest was Elspeth–and they had a dog named Frodo! Who knew you could do that?) Since it was too late for me to have that kind of childhood, I dreamed that some day I might create such a life for the children I hoped to have.

The title is an allusion to Lewis Carroll’s “The Lobster Quadrille”:  “Turn not pale, beloved snail, but come and join the dance,” and this was the first book I read that suggested that the path to writing was not, in fact, to shut oneself up in a room with one’s demons but to enter into life as fully as possible and live to tell the tales. It probably doesn’t seem such radical stuff now, but for a good (read: “compliant”) student in the early 80s struggling with what she’d later know was anxiety and depression, the idea that there was a whole different way to learn about writing and to live as a writer than those I’d been taught was ground-shifting. Life-saving.

The librarian in me now would be perfectly fine with the younger me keeping this book.  (But you don’t have to steal it now. Amazon has multiple old copies available.)

(This was written in response to a Facebook challenge to post photos of the covers of 7 favorite books in 7 days with no commentary. Clearly, I’ve broken the no commentary rule–shocker! I’m not as compliant as I once was and tend not to follow rules that seem arbitrary. Who says the 7 days have to be in a row? And why 7? Not sure how many I’ll do. Feel free to nominate yourself for the challenge.)