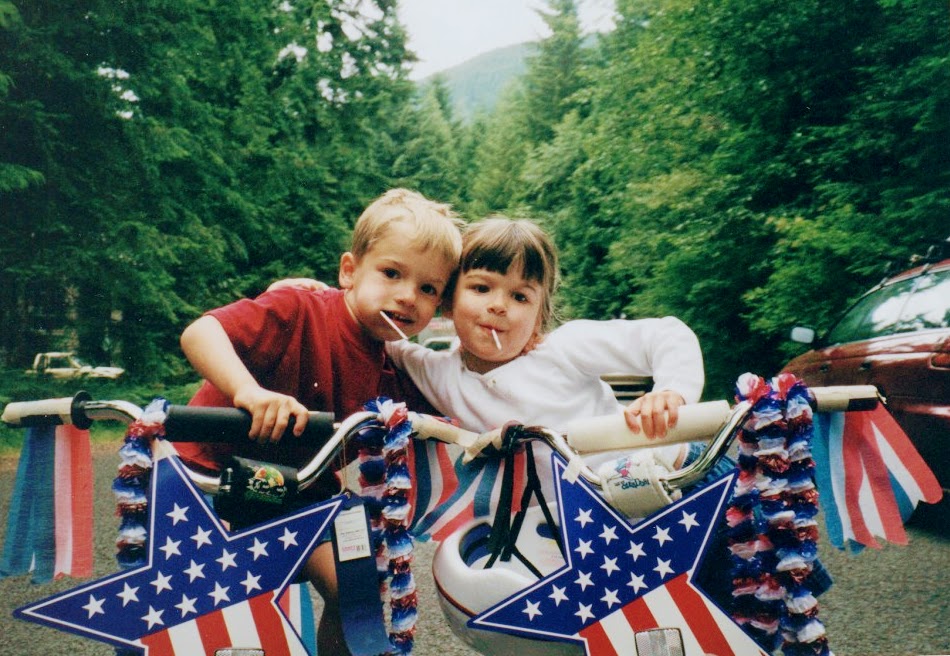 My children had, in many ways, an idyllic, throw-back childhood. We lived in a small mountain community, where neighborhood kids spent countless low-supervised hours tromping through woods as they acted out epic dramas in imaginary kingdoms built on the banks of the creek and river that ran past our homes.

On the 4th of July, most of us gathered for a parade, led by a local fire truck and an older, beloved couple who dressed as Uncle Sam and Lady Liberty. We all decorated bikes and wagons and walked with the kids and waved to neighbors who lined the streets and waved back. Like something out of a movie about times gone by–except it was our time.

I miss those days.

I miss how sweetly innocent and simple the 4th of July felt then. I miss the optimism I felt for our children’s futures. I miss my ignorance–which was, in many ways, bliss.

Because it’s all different now. My children are grown, and the 4th of July will likely never again be a sweet, simple, or nostalgic holiday for me. This year, I cannot look at this picture of my babies without thinking of the thousands of children currently being held, by my government, in cages away from their parents. I can’t help thinking of their parents and the pain they must be enduring as they imagine that of their children.

To all those who have asked/accused people like me, who are horrified at these actions and are raising our voices against it, Where was your outrage when___ (fill in the blank)? all I can really say is, “You’re right.” They aren’t always right about what actually happened in the past, but their question gets at an important and essential truth:  Our governmental institutions have been responsible for unjust, painful, outrageous actions all through my life, and I did not protest most of them. I didn’t even know about a lot of them.

Recently, my daughter asked me how I could bring children into such a difficult and troubled world (“just the climate issue alone, Mom!”), and the only answer I could give was that I didn’t understand, when I was making that decision, how troubled our world really is. “How could you not?” she demanded of me. “All the information was available.”

She is not wrong.

And I don’t have any kind of good defense. The second time Bush won the presidency through a questionable election, I checked out. I decided my contribution was going to come through my work as an educator and parent, and that that was enough. I stopped paying close attention because paying attention frustrated me and made me feel powerless and because–I understand now, but didn’t then–my privileges shielded me from the impact of so many things that were happening. I told myself that none of it really mattered that much. Life goes on, went on, much as it always had, for me. I checked out because I could. Simple as that.

There’s really no excuse for me not knowing the things I didn’t know then, but I know them now. And you know how it is with so many truths we don’t really want to know:  Once we know them, we can’t un-know them.

I can’t un-know that people of color have a very different lived experience in this country than people who look like me.

I can’t un-know that I have lived my whole life in a country founded on white supremacy, and that race has been at play in every aspect of our history.

I can’t un-know that we are in a place I never thought we could be but that I should have known was possible. The balance of powers is gone, as are collective agreements about how to play fair in a democracy. There appear to be very few checks still in place, and the ones that remain are under attack.

And this is knowledge I cannot simply turn away from, much as part of me wishes I still could.

It is not so much that I’ve become “woke” as that I’ve just started to pay attention again. To pull my head out of the sand. And to all who ask, “Where was your outrage when___?” all I can say is, “Fair question, but it’s a time-waster, a diversion, a straw man.”

That I wasn’t outraged when ____ does not invalidate my outrage now.

Just  because I (and so many others) failed to protest in the past, it does not mean we should be quiet now or that our protest now lacks legitimacy. It does not mean that past wrongs justify current ones. And it does not mean that our outrage now is only because we don’t like your guy. To be clear:  We don’t. He’s a racist, misogynistic, corrupt, dishonest man who’s surrounded himself with people a lot like himself.

The important fact is not that we dislike them as people, but that we don’t like what they are doing. We don’t like elimination of due process, violation of laws, and irreparable psychological damage done to children for political gain. We don’t like their lies and their abuses of power. We don’t like the ways in which they have not played fair. We don’t like any of them because collectively they pose a greater threat to our country than any I’ve ever seen. I like to think we’d be against that no matter who occupied the White House, if we knew about it.

What I know today is that patriotism requires so much more than fireworks and colorful streamers woven through the spokes of a bicycle wheel. It requires that we inform ourselves, seek out truth, and, once we know it, speak it to authority–through our words, our votes, and, if necessary, our protest. As the bumper sticker says, Dissent is Patriotic. Good Lord, as much as our country was founded on white supremacy, it was also founded on dissent. We have always been a complex, contradictory nation, one who idealizes tradition and decorum with the same breath we use to smash them. Our understanding and celebration of our country–our patriotism–should be equally dimensional.

While I’d like to wish you a happy 4th, that doesn’t seem the right sentiment this year. In fact, what I most wish for your 4th is that it be a complicated one, a mix of love and pride and anger and alarm and–above all else–one of resolve to preserve the best of what this day has traditionally stood for. Our children need that from us, much more than they need sparklers and streamers. (But hey, I hope you enjoy the sparklers and streamers. We need those, too.)

13 thoughts on “Where was your outrage when…?”